Notice: amp_is_available was called incorrectly. `amp_is_available()` (or `amp_is_request()`, formerly `is_amp_endpoint()`) was called too early and so it will not work properly. WordPress is currently doing the `pre_get_posts` hook. Calling this function before the `wp` action means it will not have access to `WP_Query` and the queried object to determine if it is an AMP response, thus neither the `amp_skip_post()` filter nor the AMP enabled toggle will be considered. It appears the theme with slug `publisher` is responsible; please contact the author. Please see Debugging in WordPress for more information. (This message was added in version 2.0.0.) in /home/runcloud/webapps/techilive/wp-includes/functions.php on line 5313
 Chiney Ogwumike returns, but Sparks stumble in season opener against Dallas - TechiLive.in 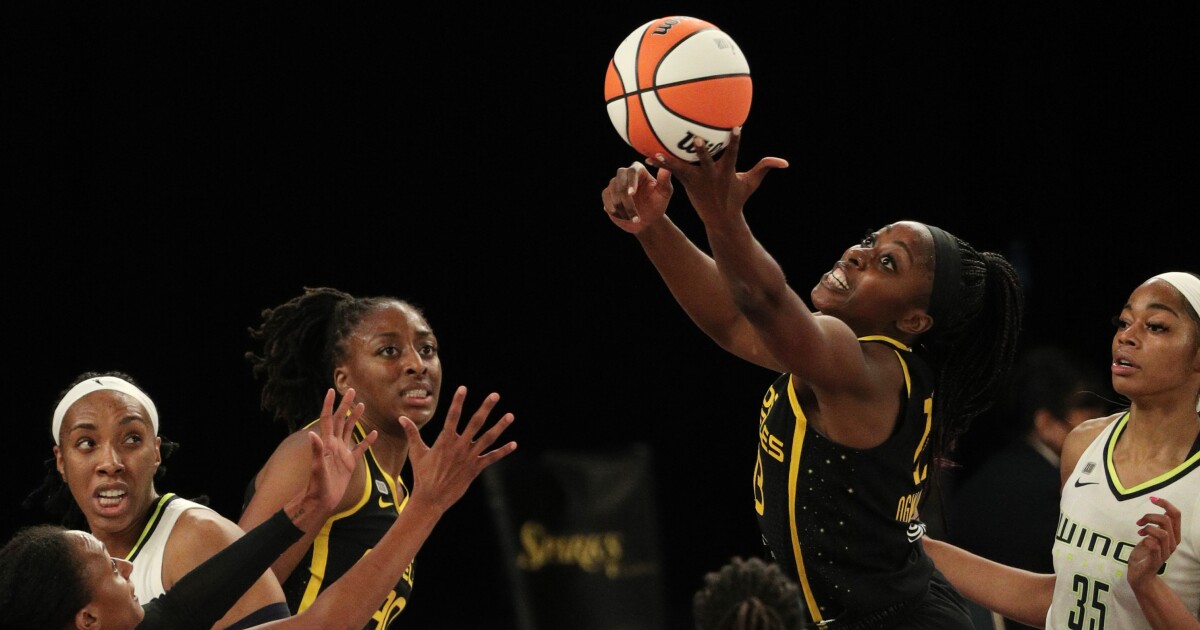 Chiney Ogwumike saw the ball snap through the net on a long three-pointer and she couldn’t help but celebrate. The Sparks forward formed a circle with her thumb and forefinger, holding the loop over her eye like a monocle while flashing a wide smile.

Ogwumike returned to the court for the first time since 2019, scoring 12 points and grabbing six rebounds in the Sparks’ season-opening 94-71 loss against the Dallas Wings at the Los Angeles Convention Center on Friday.

The Wings (1-0) spoiled Ogwumike’s return as the retooled Sparks roster looked uncomfortable playing together for the first time in a true game.

The Sparks (0-1) shot 35.9% from the field and 25.9% from three-point range, got outrebounded by 20 and got progressively worse on defense as the game wore on, allowing the Wings to run away with the 23-point victory.

“We buckled under pressure,” said Nneka Ogwumike, who led the team with 18 points on uncharacteristically labored eight-for-14 shooting. “It’s not how anybody wants to start a season … but it certainly draws a line for how far we want to go and how much better we want to get.”

Chiney was one of four Sparks players with double-digit points after she opted out of the 2020 bubble season because of health concerns with the compressed schedule during the pandemic.

With basketball on the back burner, Ogwumike started to carve out a role in media, hosting a daily radio show on ESPN and producing the documentary “144” that aired Thursday showing behind-the-scenes footage of the WNBA’s 2020 season in Bradenton, Fla.

With her off-the-court exploits building, many questioned whether Ogwumike would return to the court. To her, returning was never in doubt. She was even determined to level up.

The two-time All-Star known for her athleticism and energy in the post worked to improve her face-up shot during her extended break and showed it with two-of-three shooting on three-pointers Friday. Her previous career-high in made three-pointers was one.

Guard Kristi Toliver also made her long-awaited return to the court with 11 points and two assists after opting out last year.

Toliver signed with the Sparks as a free agent in 2020 hoping to rekindle the franchise’s championship magic. Instead of reuniting with Candace Parker and Chelsea Gray, with whom she won a title in 2016, Toliver found herself teaming up with former Indiana Fever All-Star guard Erica Wheeler and rookie forward Jasmine Walker on a new-look team.

Sparks coach and general manager Derek Fisher’s plan to build the roster with long, versatile defenders paid off with 26 forced turnovers, but the Wings also shot 52.4% from the field and 47.1% from three-point range.

The Sparks led by seven after the first quarter but started to unravel when frustration from missed layups and an inability to convert on turnovers compromised the defensive effort.

“The trust that you have to have with one another, it takes time to build that,” Fisher said.

They will have plenty of time now. The Sparks don’t play again until May 21 at Las Vegas and are planning to use every available minute to improve after Friday’s disappointment.

“As an athlete, you would love another game so you can erase this memory, but I don’t think that needs to happen for us,” Chiney Ogwumike said. “I think we need to know exactly what this feels like so we work so that we never feel this way again.”

Denial of responsibility! TechiLive.in is an automatic aggregator around the global media. All the content are available free on Internet. We have just arranged it in one platform for educational purpose only. In each content, the hyperlink to the primary source is specified. All trademarks belong to their rightful owners, all materials to their authors. If you are the owner of the content and do not want us to publish your materials on our website, please contact us by email – admin@techilive.in. The content will be deleted within 24 hours.
Loading...
ChineyDallasnews updateOgwumikeopenerReturnsSeasonSparks
0
Share