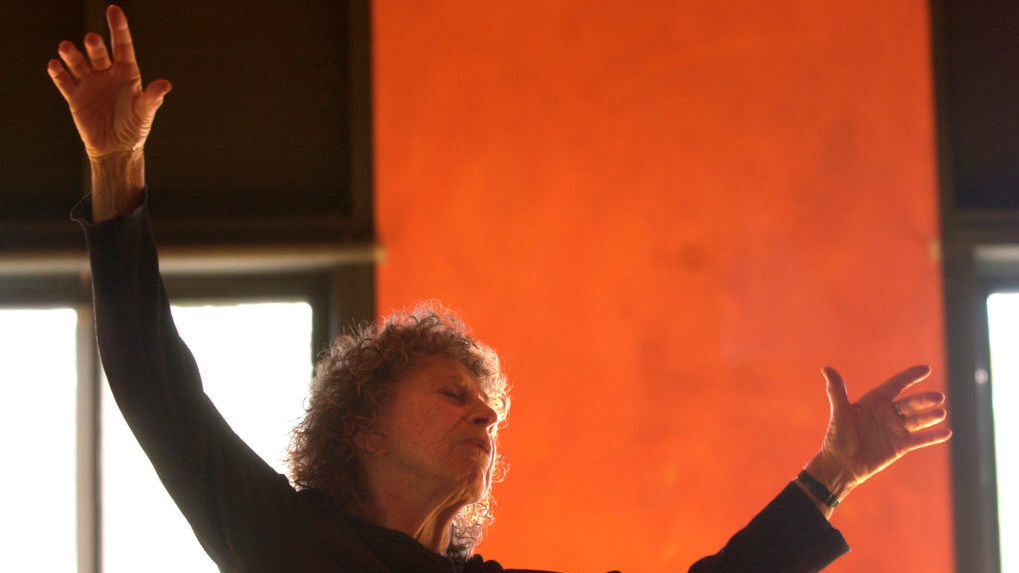 Choreographer Anna Halprin, Who Redefined Dance As A Tool For Healing, Dies At 100

Influential choreographer and dancer Anna Halprin has died at age 100. Her art spanned high modernist works and collaborations with artists like John Cage to community-oriented projects that have helped guide people through serious illnesses. Her death was announced by her family; no other details were given.

Born Anna Schuman in Winnetka, Ill., in 1920, Halprin began studying dance as a little girl. She later pursued her studies at the University of Wisconsin, where she met landscape architect Lawrence Halprin; they were married for 70 years before his death in 2009.

After World War II, the couple settled in San Francisco — a move that reoriented Halprin away from the tight modernist circles of their former home, New York City, and towards different modalities. In 1955, Halprin founded the groundbreaking San Francisco Dancers’ Workshop, where her students included Simone Forti, Yvonne Rainer, Trisha Brown and Meredith Monk. She collaborated there with composers John Cage, Terry Riley and La Monte Young, among other creative forces.

Her husband was an influential figure in his own field, designing the memorial to President Franklin D. Roosevelt in Washington, D.C., as well as Ghirardelli Square in San Francisco, a 1.5-mile walkway in the old city of Jerusalem and parts of the Bay Area Rapid Transit System in Calif. The couple also collaborated: Mr. Halprin designed an outdoor deck on their home that served as a work space for his wife, which meandered through the redwoods by Mt. Tamalpais.

“That had a tremendous impact on me,” Anna Halprin told The New York Times in 2014. “The dance deck was an eye-opener to taking theater to where people are rather than expecting people to come to you.”

Halprin’s most famous work arguably was 1965’s Parades and Changes, in which her dancers undressed to nudity. When the piece premiered in 1967 at New York’s Hunter College, it was promptly banned, and arrest warrants were issued for all the performers, including composer Morton Subotnick.

Halprin was fully conscious of the power of art in addressing social issues. In the late 1960s, she brought together Black and white dancers for her work Ceremony of Us. Later works, including her Planetary Dance, is centered around the idea of community engagement and renewal, and is meant to be performed by anyone who chooses to participate. In her vision, dance was a deeply democratic activity.

After she was diagnosed with cancer in the early 1970s, Halprin began using dance as a tool of recovery and for addressing grave needs, both for herself and others. She developed specific programs for those suffering from cancer and AIDS. With her daughter Daria, in 1978 she founded the Tamalpa Institute, an educational and research arm of the Dancers’ Workshop. (The Halprins also had another daughter, Rana.) Much of her work involved the connections between art and healing; as her husband ailed, she created such works as 2000’s Intensive Care: Reflections on Death and Dying.

In all, Halprin created more than 150 dance pieces and wrote three books, the most recent of which, 2019’s Making Dances That Matter: Resources for Community Creativity, was written with psychotherapist Rachel Kaplan.

“Part of the challenge I have faced in my work,” Halprin wrote, “is to take our practice of mostly ornamental or performative dance to a place where it can serve multiple community, social and survival needs. This is a book about creating dances that matter to people in their real lives, repurposing dance as a vehicle for social change and community resilience.”

Loading...
Denial of responsibility! TechiLive.in is an automatic aggregator around the global media. All the content are available free on Internet. We have just arranged it in one platform for educational purpose only. In each content, the hyperlink to the primary source is specified. All trademarks belong to their rightful owners, all materials to their authors. If you are the owner of the content and do not want us to publish your materials on our website, please contact us by email – [email protected]. The content will be deleted within 24 hours.
AnnachoreographerDanceDiesentertainment newsEntertainment updateHalprinhealing
0
Share