Notice: amp_is_available was called incorrectly. `amp_is_available()` (or `amp_is_request()`, formerly `is_amp_endpoint()`) was called too early and so it will not work properly. WordPress is currently doing the `pre_get_posts` hook. Calling this function before the `wp` action means it will not have access to `WP_Query` and the queried object to determine if it is an AMP response, thus neither the `amp_skip_post()` filter nor the AMP enabled toggle will be considered. It appears the theme with slug `publisher` is responsible; please contact the author. Please see Debugging in WordPress for more information. (This message was added in version 2.0.0.) in /home/runcloud/webapps/techilive/wp-includes/functions.php on line 5313
 Chris Taylor's 14th-pitch, bases-clearing double powers Dodgers past Cardinals - TechiLive.in 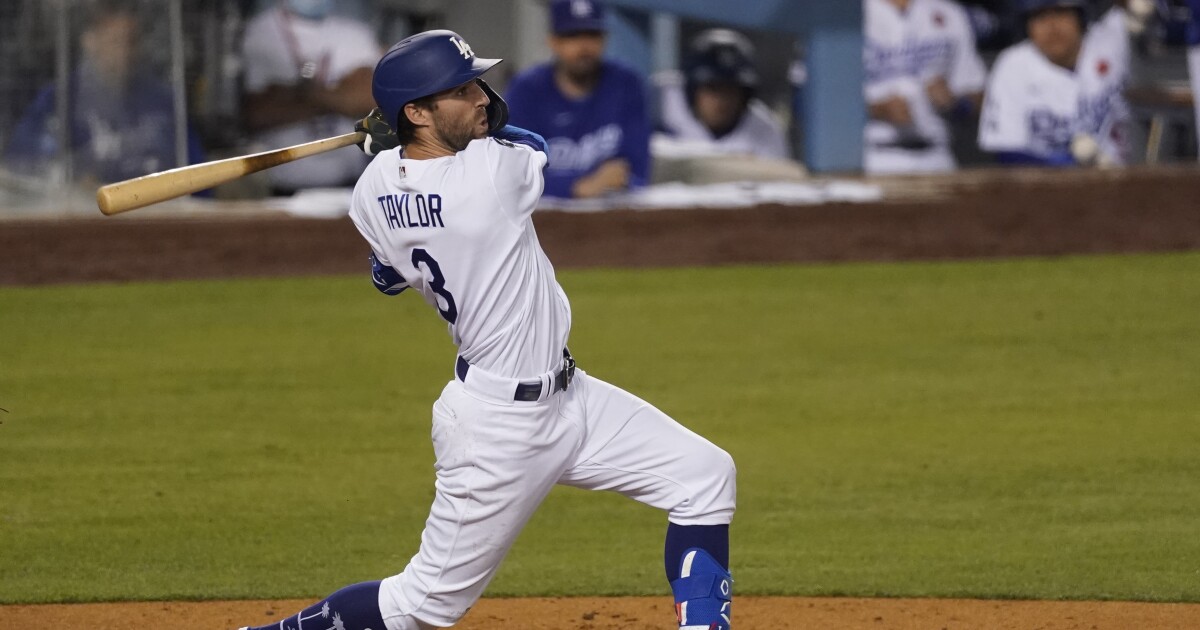 It was an epic showdown, all right, just not the one most anticipated.

What began as a marquee pitching matchup between former Southern California prep stars Trevor Bauer of the Dodgers and Jack Flaherty of the St. Louis Cardinals gave way to a battle royale between Dodgers left fielder Chris Taylor and Cardinals reliever Genesis Cabrera.

The utility man and the hard-throwing left-hander stared each other down for 14 pitches Monday night, the tension rising throughout a grueling at-bat that came with two outs, the bases loaded and the score tied in the bottom of the sixth inning, before Cabrera finally blinked.

After fouling off a total of eight two-strike pitches — six fastballs ranging from 97 to 99 mph, an 82-mph curve and a 90-mph changeup — Taylor lashed a 97-mph fastball into the right-center-field gap for a three-run double to push the Dodgers toward a 9-4 victory before 18,071 at Dodger Stadium.

“That was a huge at-bat, the difference in the game,” Dodgers manager Dave Roberts said. “He just wasn’t gonna be denied. The guy is throwing 97 to 98 mph with a breaking ball and changeup. C.T. was just relentless in that at-bat. It was probably the best one we’ve had this year.”

Taylor’s clutch hit broke a 3-3 tie, and the Dodgers pulled away with three more runs in the eighth to snap a three-game losing streak. Almost as remarkable as the length of the at-bat was the fact that, once the count ran full, Taylor did not appear to swing at a pitch outside the strike zone.

“I knew he had a good fastball with some off-speed stuff in there as well,” Taylor said of Cabrera, whom he had not faced before Monday. “I was trying to keep it short and simple, sort of single him to death, play pepper, not try to do too much. I knew I had been up there for a while. I didn’t realize it was 14 pitches.”

The Dodgers took a 2-0 lead in the second when Gavin Lux and Taylor hit back-to-back solo homers off Flaherty, Lux hitting a towering 378-foot drive to right for his fourth homer of the season and Taylor lining a 399-foot shot to left for his seventh.

But those were the only hits Flaherty, the former Harvard-Westlake High School star, gave up in a five-inning, 83-pitch start in which he struck out nine and walked one before departing because of left-side tightness.

Bauer, the Santa Clarita Hart High product, said he felt “pretty sick” coming into the game and wasn’t sure whether he would be able to make the start, but he was able to “get enough sleep, hydrate and get my body” in condition to pitch.

The right-hander didn’t look sick. He yielded one hit through five innings, Tommy Edman’s leadoff double in the first, and got some help from center fielder Cody Bellinger, who made a leaping catch at the top of the wall to rob Yadier Molina of extra bases in the second.

But the Cardinals broke up Bauer’s shutout in the sixth when Justin Williams pulverized a 92-mph fastball, sending a leadoff homer high off the right-field foul pole, the ball leaving his bat at 115 mph.

Edman reached on second baseman Zach McKinstry’s second throwing error of the game, and Dylan Carlson crushed an 0-and-2 curve over the wall in left-center for a two-run homer and 3-2 lead.

The Dodgers countered with four runs in the bottom of the sixth, Max Muncy sparking the rally with a one-out double to right-center off reliever Ryan Helsley. Justin Turner singled sharply to left, advancing Muncy to third, and Bellinger drew a walk from Cabrera to load the bases.

Will Smith took a full-count low-and-inside fastball for ball four to force in a run for a 3-3 tie, the 15th bases-loaded walk issued by the Cardinals this season.

Taylor and Cabrera then went at it for 14 pitches — tied for the second-longest at-bat in the major leagues this season — before Taylor delivered the clutch hit that gave the Dodgers a 6-3 lead.

Tyler O’Neill’s solo homer off Bauer in the seventh cut the lead to 6-4, but Lux lined his second homer of the game, a solo shot off reliever Daniel Ponce de Leon, to right-center for a 7-4 lead in the eighth and the Dodgers tacked on two more runs when Taylor doubled, Matt Beaty singled and Mookie Betts doubled.

Highlights from the Dodgers’ 9-4 win over the St. Louis Cardinals at Dodger Stadium on Monday.

Denial of responsibility! TechiLive.in is an automatic aggregator around the global media. All the content are available free on Internet. We have just arranged it in one platform for educational purpose only. In each content, the hyperlink to the primary source is specified. All trademarks belong to their rightful owners, all materials to their authors. If you are the owner of the content and do not want us to publish your materials on our website, please contact us by email – admin@techilive.in. The content will be deleted within 24 hours.
Loading...
14thpitchbasesclearingCardinalsChrisDodgersdoublenews updatepowers
0
Share