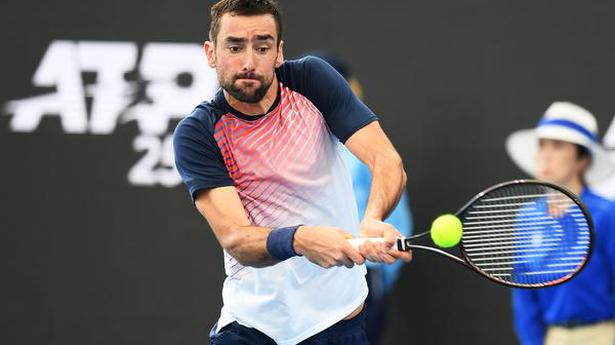 The fourth-seeded Croatian has had four wins in five matches this year and also reached the semifinals of the first Adelaide International last week before losing to Russia’s Karen Khachanov. Cilic served 14 aces to Paul’s eight and won 84% of first serve points.

Paul also had been in solid form coming into Thursday’s match, winning 12 of his last 14 matches. Paul beat compatriot Frances Tiafoe in the first round this week and reached the quarterfinals with a 6-4, 7-6(6) win over Benjamin Bonzi.

At the Sydney Tennis Classic, fourth seeded Anett Kontaveit of Estonia took the first set of her quarterfinal against Ons Jabeur of Tunisia before Jabeur was forced to retire with a lower back injury.

The pair had been almost an hour on court before Kontaveit, who lost twice to Jabeur last year, took the first set 6-4. Jabeur had begun to serve in the second set when she retired.

“I really hope that Ons is going to be fine for next week and that it’s nothing too serious,” Kontaveit said.

“The first set was really competitive and we’ve had some tough matches before but she’s always come on top. I was really happy to get the set and that I was playing the way I was playing.”

Former No. 1 Andy Murray, playing on a wild card, advanced to the semifinals when eighth-seeded David Goffin retired at the start of the second set. Murray took the first set 6-2 in 50 minutes.

Denial of responsibility! TechiLive.in is an automatic aggregator around the global media. All the content are available free on Internet. We have just arranged it in one platform for educational purpose only. In each content, the hyperlink to the primary source is specified. All trademarks belong to their rightful owners, all materials to their authors. If you are the owner of the content and do not want us to publish your materials on our website, please contact us by email – [email protected]. The content will be deleted within 24 hours.
AdelaideAdelaide InternationalAna KonjuhCilicCoco Gauffgrand slam tennisMarin Cilicnews update
0
Share

How was my pitch, Jenny? Zoom’s venture fund invests in conversational AI platform