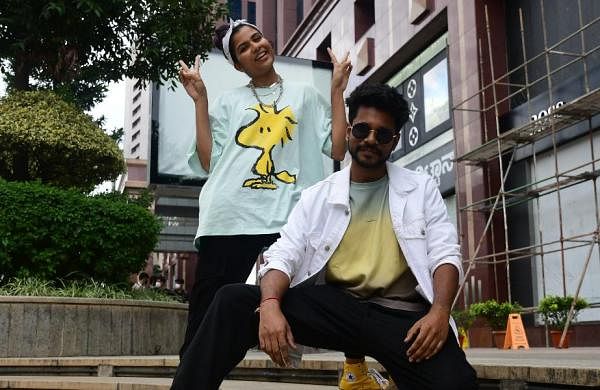 Climbing the stairs to success

The age of social media has brought about a number of emerging stars in recent years. One such instance is the rise in popularity of Bengaluru-based couple Jodi Anoorabh, known especially for their viral dance videos.

A collaboration between Anoosha Shetty and Saurabh Chanderiya, both full-time IT professionals, Jodi Anoorabh jumped in popularity over the last year going from 4,000 followers to nearly 2,25,000 followers on Instagram.

The couple has amassed a large following, especially on Instagram where they post at least one video a day. While most of their videos are shot at home thanks to pandemic-related concerns and busy work schedules, the couple also tends to do more impromptu routines at places they visit, one such instance being a short reel they posted dancing on the stairs of UB City on Vital Mallya Road that garnered over 50,000 likes on Instagram.

The video was a spontaneous thing, happening on their way back from a farewell party for a friend of theirs. On whether the videos were usually impulsive or planned beforehand, “It’s a mix of both”, says Saurabh.

The pair had met on a dating app in 2015 before realising their mutual love for dance. Before this, Saurabh had been posting on his YouTube channel for close to seven years, starting with dance performances he’d done as a second year college student at IIT Bombay as a way to overcome stage fright.

On the other hand, Anoosha had been an avid dancer for most of her life, as one of those kids who would dance any chance they got. When they had met, however, she hadn’t danced in a few years.

They started posting videos and clips of themselves dancing on YouTube four years ago, before rebranding completely and calling themselves Jodi Anoorabh early last year, the title coming from a portmanteaux of the duo’s names.

“It was more like a fun thing, we both love dancing and we’d both been doing this continuously so during our wedding, we thought ‘why not channelise our energy and do a couple brand’?”, says Saurabh.

Though both Anoosha and Saurabh hail from different cities, Anoosha from Udupi and Saurabh from Mumbai, the couple has settled in Bengaluru and continue to live here, in equal parts due to their day jobs as well as their love for the city’s weather.

When asked what their plans for the future are with Jodi Anoorabh, Saurabh says, “The actual goal is to spread happiness, it makes us feel good knowing that we’re bringing a change in people’s lives.” The next step, he says, is figuring out a way to scale it up.

“We’ve learned a lot over the last one and half years or so about social media, how to manage time, what is important, and now we’re thinking we want to share this knowledge through our videos,” he adds. While the fame has been a surprise for the both of them, they haven’t been strangers to a host of negative comments aimed their way.

“I don’t know why the world is like that,” says Saurabh, “But I’m sure this happens to many people with more of a following than us, with more following, more hate comes automatically.” Despite this, however, as well as juggling full-time jobs with their Instagram career, the couple shows no signs of stopping.

Denial of responsibility! TechiLive.in is an automatic aggregator around the global media. All the content are available free on Internet. We have just arranged it in one platform for educational purpose only. In each content, the hyperlink to the primary source is specified. All trademarks belong to their rightful owners, all materials to their authors. If you are the owner of the content and do not want us to publish your materials on our website, please contact us by email – [email protected]. The content will be deleted within 24 hours.
Anoosha ShettyclimbingDance videosentertainment newsEntertainment updateJodi Anoorabhnews updateSaurabh Chanderiya
Share

M1 Finance vs. Vanguard: How They Compare – Modest Money