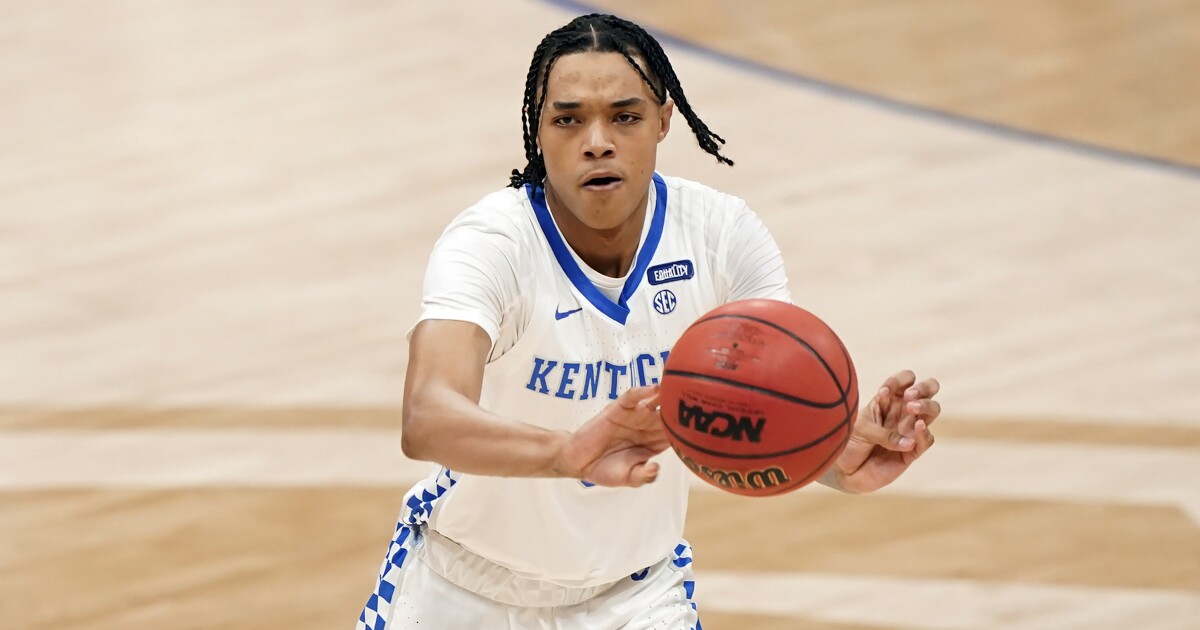 On the first day of a new season’s training camp, the youngest and least contractually secure Clippers gathered inside San Diego State’s basketball practice facility around 10 a.m. Tuesday and around Dan Craig, an assistant, who informed them they would start by revisiting the basics: How to box out on free throws.

It was only some 20 minutes later that star Paul George and his fellow starters sauntered inside wearing slides and headphones, their tenures insulating them from such review lessons.

The young guys “are kind of like all over the place, very excited,” coach Tyronn Lue said. “You know the veteran guys are like ‘eh.’”

“Practice was fun,” he said. “It didn’t feel like three hours.”

Such an interplay between the young and old, eager and established, is typical among NBA training camps, but the Clippers’ generation gap will persist well into the season by design. Believing last season’s core included too many older, expensive contributors, Clippers executives set out during the offseason to balance its collection of in-their-prime headliners with a youth movement in hopes that, should their potential develop, their inexpensive deals and youthful energy will allow the Clippers’ to extend their championship window several years.

“To be able to add talent and rising ascending talent we thought was really important, just because we have a veteran corps that does a lot of heavy lifting throughout the course of the year,” said Lawrence Frank, the team’s president of basketball operations.

Familiar faces on a roster that reached the conference finals, including Patrick Beverley (33), Rajon Rondo (35) and center DeMarcus Cousins (31), were jettisoned to ensure room for rookies Boston, Keon Johnson (19) and Jason Preston (22).

Justise Winslow (25), on a mission to live up to his potential following a hip injury, played backup point guard Tuesday but also will be counted on to contribute as a small-ball center. With backup center Serge Ibaka limited to noncontact drills while recovering from back surgery, the Clippers could look to fill their last available roster spot with a big man and might have a “tough choice,” as Lue said, in potentially choosing between Harry Giles (23) or Isaiah Hartenstein (23).

“The veterans definitely have a veteran leadership, and the way they play the game, but the young guys are just running around, excited, just playing fast, playing hard, and that’s what you need in training camp,” Lue said. “We got a balance of both, so it’s really good for us.”

By playing center Ivica Zubac, still only 24, guard Luke Kennard (25) and second-year wing Terance Mann in key postseason moments, Lue demonstrated last season that his coaching style is flexible enough to believe that finding time for younger players and carrying championship-caliber expectations are not mutually exclusive ideas. As summer league in Las Vegas ended, and Boston, Preston and Johnson began to grow more comfortable, the Clippers suggested that with Kawhi Leonard expected to miss significant time because of a knee injury, the upcoming season could present an opportunity to provide their rookies the runway to grow for the future without lowering their present-day expectations of a playoff berth.

How much that happens in practice remains to be seen on a roster where playing time must be earned. Of the seven Clippers who averaged the most minutes in the 2021 postseason, five are back and healthy to start this season. With that kind of continuity, “I think it will be really easy” to start fast, said forward Marcus Morris.

An injured right foot has kept Preston limited to watching practice from a scooter. Johnson’s place in the regular rotation seems distant, for now, as Frank described the goal for the rookie as polishing a few areas he consistently does well — on-ball defense, finishing in transition — and slowly widening his box of skills.

For Boston, his confidence is as evident as the braids that swing when he rises to shoot, or the smile that crossed his face when he acknowledged that he has escaped, so far, being assigned any onerous rookie duties.

Having worked out in the offseason with NBA veterans including Ben Simmons for several years, he is respectful of Clippers veterans but not awed. He offered a knowing smile and little else when asked if he’d beaten any teammates one-on-one.

“I feel like I’ve just been a pro for three years; it’s the money just came [recently],” Boston said. “So it’s just taking it one day at a time learning from those guys.”

Morris is one of them. The 32-year-old has a direct teaching style, at one point grabbing the rookie in front of the larger group at practice to make a point about where he had erred, Boston said.

He knows the first step to rotation minutes is by learning. But the second is by doing, and even in a lineup stacked with veterans, there was little doubt already that he belonged.

“My whole life, I feel like I can score on anybody, I feel like nobody can just guard me one-on-one,” Boston said. “So just putting the ball in the hoop, in many different ways, I feel like that’s my game.”

Denial of responsibility! TechiLive.in is an automatic aggregator around the global media. All the content are available free on Internet. We have just arranged it in one platform for educational purpose only. In each content, the hyperlink to the primary source is specified. All trademarks belong to their rightful owners, all materials to their authors. If you are the owner of the content and do not want us to publish your materials on our website, please contact us by email – [email protected]. The content will be deleted within 24 hours.
AddboostClippersEnergyKawhiLeonardnews updateplayoff
Share

The Best Barefoot Shoes for Walking or Running