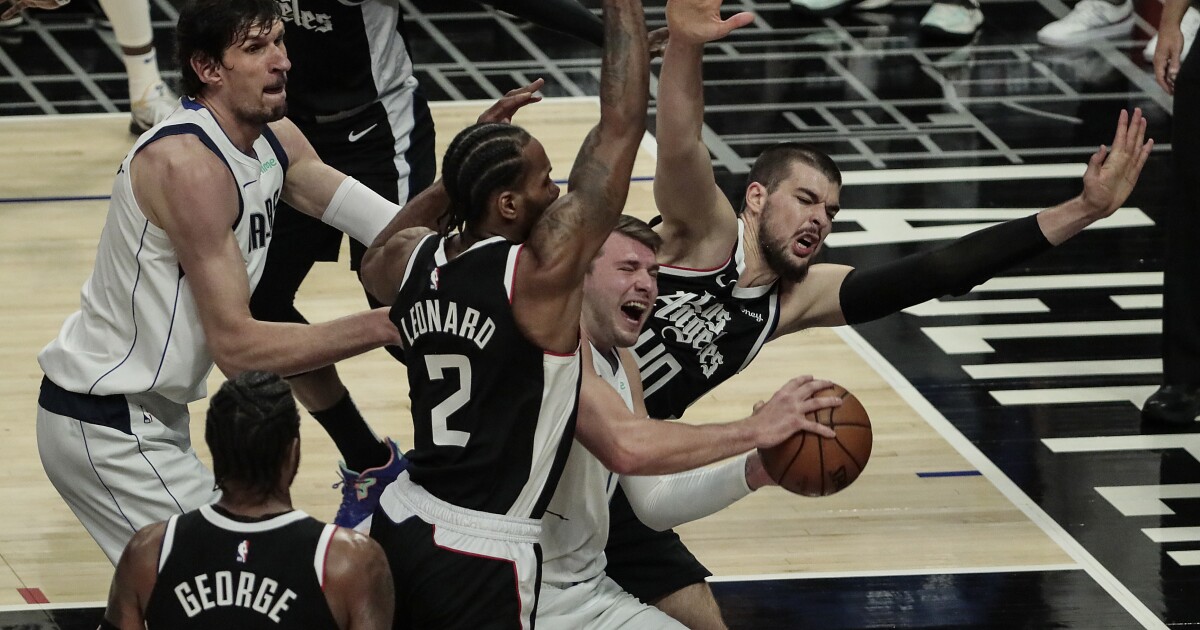 It is typically inadvisable to go after the same rebound that Boban Marjanovic wants.

At 7-foot-4, with a reach as wide as a Texas live oak and hands like baseball mitts, Dallas’ center owns much of the airspace near the rim. When a Mavericks shot caromed off the rim early in the third quarter Wednesday, he grabbed hold of the ball, appearing to extend the Mavericks’ possession. But he never saw Kawhi Leonard run in to meet him.

Leonard clamped his 11 ¼-inch wide hands onto the pebbled leather and, with a twist of his hips, cleanly ripped it out of Marjanovic’s grip.

If there was ever a night for the Clippers’ taking, this was it. Returning home after two consecutive road wins to even this first-round playoff series entering Game 5 at Staples Center, the Clippers had the healthy superstars, the momentum and the welcoming crowd aching to witness the team’s first postseason win at home since 2017.

Yet the moments when they flexed their muscles were too infrequent, their hold never strong enough. Because of it, after a 105-100 loss, their championship ambitions are again hanging on for dear life trailing 3-2 in the series, with Game 6 coming Friday in Dallas.

This is only the second best-of-seven playoff series where the road team has won the first five games. The last occurrence was in 1995.

Dallas’ Tim Hardaway Jr. made two free throws to push his team’s lead to 103-100, and on the Clippers’ ensuing possession, Leonard’s off-balance three-pointer from the corner to tie missed the rim.

“Tried to pump fake and then was off-balance, pretty much,” Leonard said. “Was leaning back, ended up shooting. Got to do a better job.”

Entering the game with a strained neck, Dallas guard Luka Doncic scored 42 points, his third game with at least 39 points in the series. Including his 14 assists, he accounted for 31 of his team’s 37 field goals.

“He’s just a warrior-type guy who just happens to be one of the greatest players in the world,” Dallas coach Rick Carlisle said.

But most maddening for the Clippers is that just as in Game 1, Doncic was effectively neutralized down the stretch, making only one of his eight shots in the final quarter, and had just two assists — and yet the Clippers were their own worst enemy en route to losing their sixth consecutive playoff game in Staples Center.

“Turnovers, missed shots,” Leonard said. “We couldn’t get nothing to go in.”

Video highlights from the Los Angeles Clippers’ 105-100 loss to the Dallas Mavericks in Game 5 of their first-round playoff series on June 2, 2021, at Staples Center.

After three first-half turnovers, the Clippers committed nine after halftime.

Paul George scored a team-high 23 points with 10 rebounds and six assists. Leonard and guard Reggie Jackson each scored 20. Their bench provided 11 points, with Rajon Rondo missing all six of his shots.

Rondo appeared frustrated talking with Leonard after the final play after Leonard rose to shoot with seven seconds left. The play was designed to free George or Leonard for one of three options, Lue said, with one being a corner three.

“I think we’re fine,” Lue said. “We’ll see in two days, but like I said, everybody talked about it in the locker room, we’re good.”

Just as Lue had kept his lineup changes under wraps before Games 3 and 4, Carlisle played cat-and-mouse with his answer 90 minutes before tipoff Wednesday. But what Lue predicted became true: Carlisle countered the 6-foot-8-or-smaller lineup used by the Clippers to win two straight in Dallas by pairing 7-3 Kristaps Porzingis with Marjanovic and relying mostly on a zone defense.

It was a bet not so much on cohesion — all season, the twin-tower-plus-Doncic trio had played together only four minutes — but disruption. One game after shooting 59% inside the paint, their lack of respect for Dallas’ rim protection clear, the Clippers rarely ventured deep into the zone near Dallas’ size early on and finished shooting 48% in the paint. Five of their first six baskets were three-pointers.

Yet 10 minutes into the game, Doncic had made five three-pointers all by himself — matching the Mavericks’ combined Game 4 total — and opened what was as large as a 10-point Dallas lead by scoring 19 points, only nine fewer than all the Clippers combined.

Leonard’s rip-away rebound was typical of a third quarter where the Clippers played fast and physical, punishing Marjanovic and any Mavericks that reached the rim with contact officials rarely called for fouls. A jumper by Leonard pushed the Clippers’ lead to five, their largest margin, with 5:07 left.

It was not enough to eliminate the kind of nightmare stretch the Clippers surely thought they were past after flashing late-game resolve in Games 3 and 4. George earned his fourth foul, Dallas inserted little used center Dwight Powell and began a 24-5 run, helped by three Clippers turnovers, that unfurled over five, groan-inducing minutes.

One day earlier, Jackson had remarked that the team was “probably not earning much trust from our fan base” after its inability to win at home. Late Wednesday, the Clippers said they still have trust in themselves.

“We got down 0-2 on our own floor, went up there, won two tough games,” Lue said. “We’re going to have to do the same thing again.”

Denial of responsibility! TechiLive.in is an automatic aggregator around the global media. All the content are available free on Internet. We have just arranged it in one platform for educational purpose only. In each content, the hyperlink to the primary source is specified. All trademarks belong to their rightful owners, all materials to their authors. If you are the owner of the content and do not want us to publish your materials on our website, please contact us by email – [email protected]. The content will be deleted within 24 hours.
ClippersControlDoncicgameloseLukanews updateseries
Share

WhatsApp names Paresh B Lal as its new grievance officer for India: How to register complaint- Technology News, Firstpost