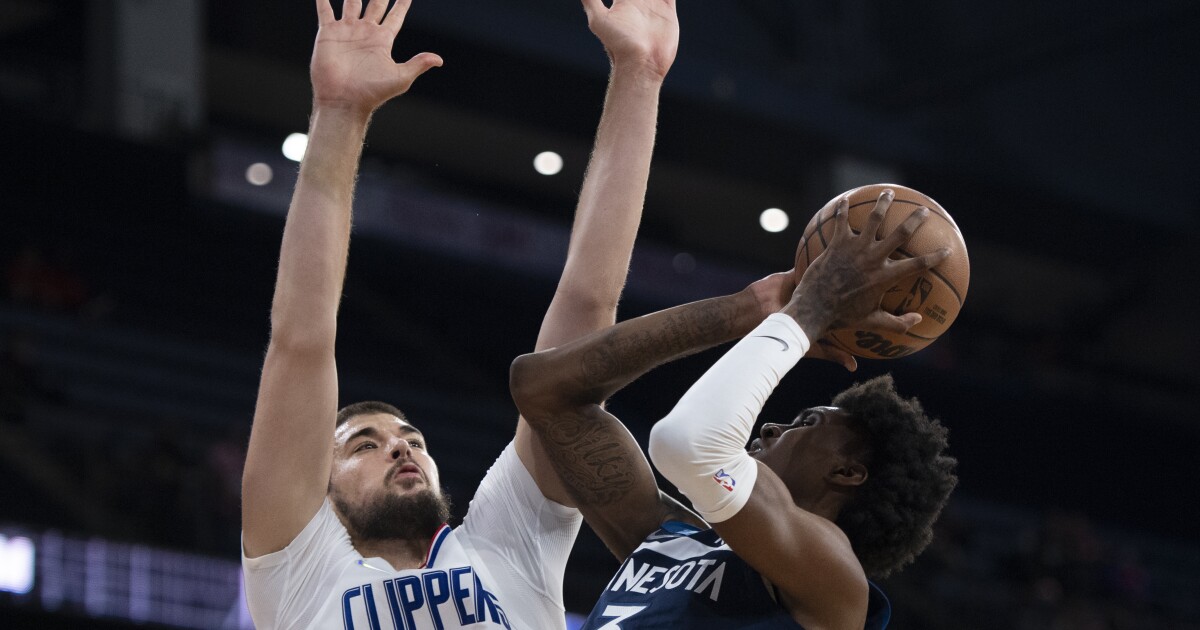 The first quarter played on Monday while Reggie Jackson stayed rooted at the bottom of Section 115, signing autographs and posing for selfies inside Toyota Arena as a spontaneous line for the signature of last season’s unexpected postseason hero grew.

Jackson could afford to linger. He, Paul George and Marcus Morris had the night off during the Clippers’ preseason finale against Minnesota, a 128-100 loss.

Their workload, and the urgency of their team, will change in the coming days.

Ahead of the Clippers’ regular-season opener Oct. 21 in San Francisco, the question is not who will start that night. Coach Tyronn Lue reiterated before tipoff Monday that Jackson, George, Morris, center Ivica Zubac and guard Eric Bledsoe are his projected starting five. Instead, the unknown is whether that lineup’s inability to play a single minute together during four preseason games will hinder their rhythm when games begin counting for real.

“Marcus been out all preseason, guys been out, Zu missed a game, Reggie’s missing a game, so those guys got to get on the same page, and we got 10 days to do that,” Lue said. “We got to lock in and be focused and understand we got to go to work and they understand that.”

Coming off of a knee injury in June’s conference finals, Morris said during training camp that his approach was to “not push it too hard because we do have a long season, that my body without Kawhi [Leonard] will be pushed to the limit, so I just got to maintain that and continue to focus on my knee and things around it.”

“He’s doing good,” Lue said. “Just want to make sure he got some good practices in before we just threw him out there in the game,” Lue said.

Zubac, who had missed Friday’s preseason matchup in Dallas because of a shoulder strain, wore a compression shirt under his jersey but otherwise looked no worse for the wear, with 10 points in 26 minutes.

Fans who didn’t arrive an hour before tipoff in time to see George warm up settled for yelling at him as he sat, and he raised a fist in acknowledgment to the audience. Many cheers were yelled in the direction of former Clipper Patrick Beverley, who landed with Minnesota in August days after first being dealt by the Clippers to Memphis. Beverley, who also sat for rest, hugged Lue during a first-quarter timeout and proceeded to spend much of the game out of his seat bantering toward referees and teammates, former and current.

Afforded enough time for essentially a second training camp, the Clippers will have more time to decide whether to keep Isaiah Hartenstein or Harry Giles at backup center. There will also be refresher courses on best practices in transition defense, after the Clippers entered allowing 24 transition points per game, then saw the issue crop up yet again. The Timberwolves racked up 17 fast-break points by halftime in front of a half-filled Inland Empire crowd, which aided a 40-point second quarter to lead by as many as 10 before halftime. But early in the third quarter, the Clippers erased that deficit behind consecutive three-pointers by Luke Kennard.

Denial of responsibility! TechiLive.in is an automatic aggregator around the global media. All the content are available free on Internet. We have just arranged it in one platform for educational purpose only. In each content, the hyperlink to the primary source is specified. All trademarks belong to their rightful owners, all materials to their authors. If you are the owner of the content and do not want us to publish your materials on our website, please contact us by email – [email protected]. The content will be deleted within 24 hours.
ClippersFallFinalnews updatepreseasonsports newssports updatetechi live
Share

Life on Mars: Simulating Red Planet Base in Israeli