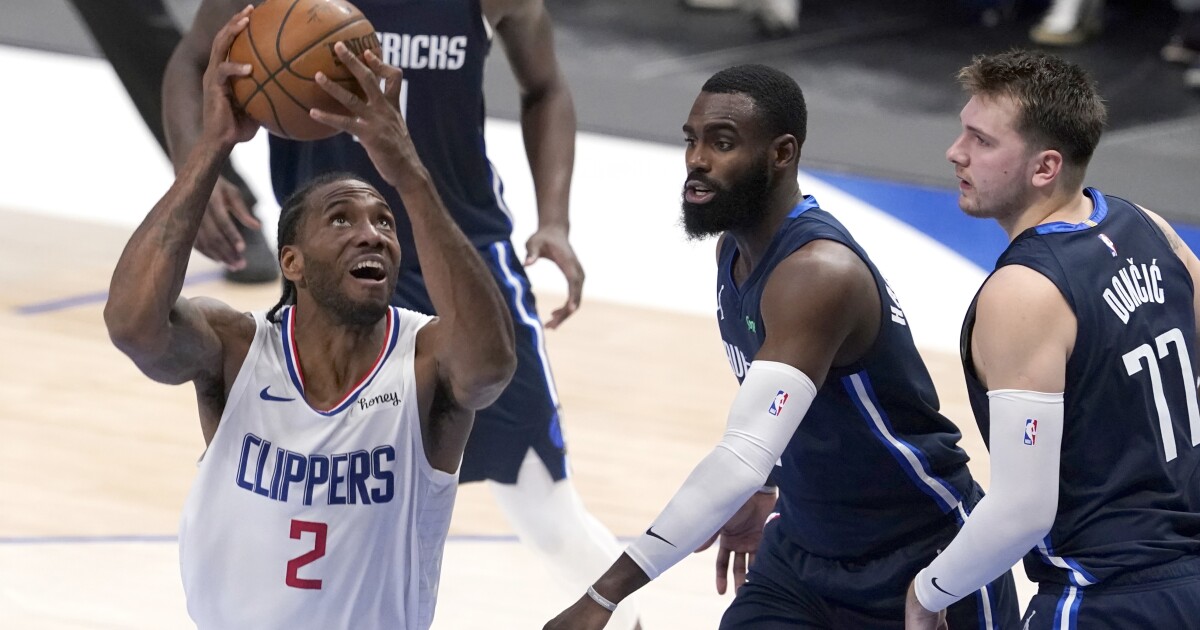 Clippers look doomed to destruct, then rally past Mavericks to save their season

The arena was roaring, the Clippers’ margin for error crumbling, an offseason of uncertainty rapidly approaching.

Trailing 2-0 in this first-round playoff series with the Dallas Mavericks, a position few higher seeds have ever recovered from, the Clippers arrived in north Texas well aware of the danger that awaited in Game 3 — and the stakes riding on avoiding it.

Assessing the existential crisis the championship-chasing franchise could plunge into should this postseason end even earlier than last, one league source described the matchup before tipoff as simply “the must-win of all must-wins.”

But before they could win Friday, in a 118-108 victory that ensures a Game 5 in Los Angeles, they had to simply survive.

Clippers coach Tyronn Lue had predicted one day earlier that this game would reveal his mercurial roster’s mettle, and as their moments of truth arrived inside a raucous, crucible atmosphere, the Clippers answered with a victory that “says a lot about us,” Lue said.

Lue wanted to see fight. Down 15 in the first quarter, he called a timeout.

“It was like, listen, let’s just stick with the game plan,” Lue said. “Luka made some shots early like he always does and now we have to be ready to weather the storm and keep attacking the offensive end, and like I said, I give our guys credit because they did that.”

They finished the quarter on a 20-4 run. When literally pushed around, they charged back. Reserve Terance Mann chased after Mavericks center Willie Cauley-Stein after being shoved in the neck on a rebound in the third quarter, a play that earned Cauley-Stein a technical and kept the Clippers on edge.

Lue wanted to see leadership. Kawhi Leonard scored 36 points and Paul George 29 behind metronomic consistency on offense, drilling shot after shot to counter the step-back jumpers by Doncic that gave him 44 points and made the crowd, at times, delirious. Lue called his top scorers “phenomenal.”

“We got down 0-2, and they weren’t discouraged,” he said. “Their conversations to the players, the things we have to do to get better and be better, they led that.”

In late-game moments in which the Clippers had folded in the first two games, they used a small-ball lineup — and its pick-and-rolls, in particular, involving Rajon Rondo — to pick apart the Mavericks and outscore them 21-14 over the final 7:18.

The win was earned Friday, but the comeback’s spark was lit during the painful previous 48 hours.

“There’s been a lot of conversation, ever since we lost Game 2, even Game 1, there’s been a lot of dialogue after the games and in the locker room trying to figure out how to be better,” said Rondo, who had six points and eight assists. “Once we got on the plane yesterday, talked about the game, going over the scouting reports in more detail.

“So it’s been a nonstop thing, constantly on my mind personally and the team, as well — understanding what we have at stake here, the type of talent we have and how we can overcome this 0-2 deficit.”

Whether the Clippers can take back control of this series hinges on replicating Friday’s ability to withstand the punches as the Mavericks made 20 three-pointers and grabbed 13 offensive rebounds.

Yet the Clippers emerged with a victory that removes some weight off their shoulders — at least, for 48 hours — by containing, at last, the Mavericks not named Luka. Jalen Brunson was held to 14 points, Tim Hardaway Jr. to 12 and Kristaps Porzingis just nine on three-for-10 shooting.

That defense held Dallas to three points in the final 3:48 of the third quarter, but the offensive outage was offset by the Clippers’ own.

By mustering only three points in the quarter’s last 4:07, and then scoring just five points in the first four minutes of the fourth quarter, the Clippers lost a rare opportunity to separate themselves, increasing a three-point lead to only five.

This was what the virtually full house had arrived to see: Doncic burnishing his playoff credentials with a comeback to send the higher seeds into a miserable 3-0 hole.

But the third option the Clippers needed so badly to emerge finally did when forward Marcus Morris made all three of his three-pointers in the fourth quarter. He finished with 15 points before fouling out, and after his last three, he traded words with the Mavericks’ bench.

The Mavericks, like the crowd, looked angry. But they had no retort, as the building finally fell quiet.

“We’ve yet to show anything,” George said. “We’re down 2-1. We’re not the favorites, we’re not the defending champs. We haven’t showed anything. We’ve got to continue doing it.”

Loading...
Denial of responsibility! TechiLive.in is an automatic aggregator around the global media. All the content are available free on Internet. We have just arranged it in one platform for educational purpose only. In each content, the hyperlink to the primary source is specified. All trademarks belong to their rightful owners, all materials to their authors. If you are the owner of the content and do not want us to publish your materials on our website, please contact us by email – [email protected]. The content will be deleted within 24 hours.
Clippersdestructdoomedmavericksnews updateRallysaveSeason
0
Share