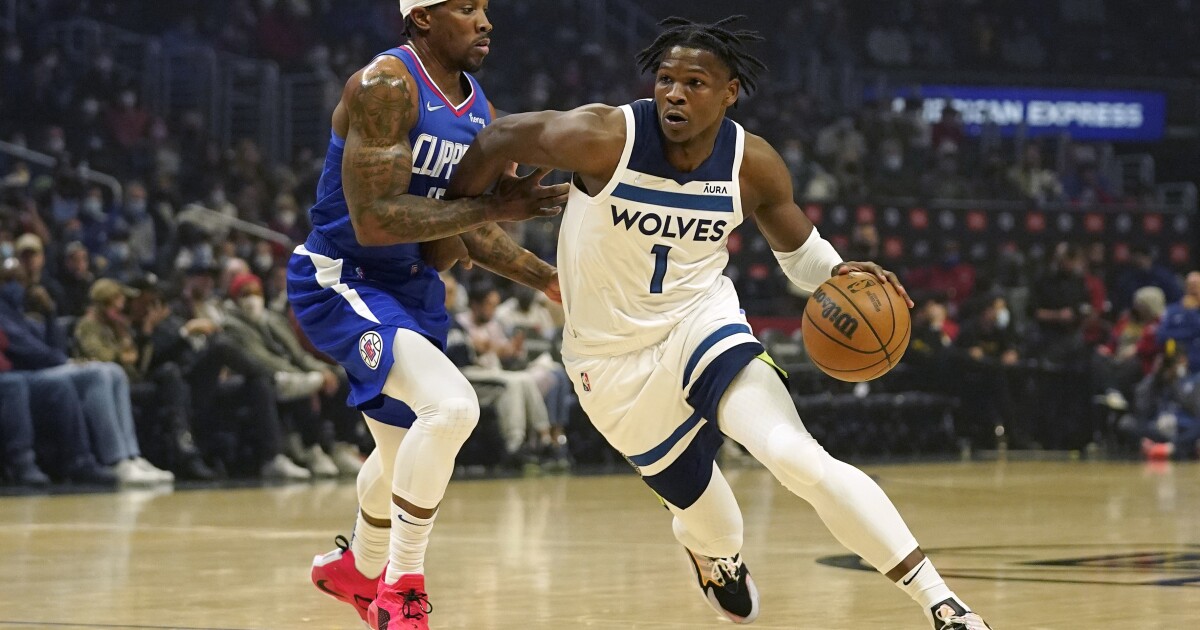 Midway through the second quarter of the Clippers’ game against the Minnesota Timberwolves on Monday night at Crypto.com Arena, guard Eric Bledsoe knifed into the lane, his eyes looking for a target. He fired a perfectly placed pass to a wide-open Taurean Prince.

The problem was Prince plays for the Timberwolves.

For a split-second, time seemed to freeze, as neither team turned to head back down the court. Bledsoe hung his head. Prince froze for a moment while clenching the basketball, seemingly dumbfounded that it had fallen so easily into his hands.

The moment was emblematic of the Clippers’ 122-104 loss in which, on a “Star Wars Night” for fans, it seemed as if the Timberwolves were casting a cruel Jedi mind trick on Clippers players.

The Clippers committed 13 turnovers in the first half alone, but the number on paper wasn’t nearly as stunning as the eye test. Most of the giveaways came unforced: Passes sailed out of bounds or careened off Clippers players’ fingertips without any Minnesota defensive pressure. Bledsoe, who had been playing such terrific basketball that he was named a finalist for the last Western Conference player of the week award, had a season-high six turnovers before halftime.

With Ivica Zubac in the NBA’s COVID-19 protocols and Isaiah Hartenstein out because of an ankle injury, it left Serge Ibaka, 32, as the only proven center.

That left acting Clippers head coach Brian Shaw with a problem, as Minnesota entered Monday’s game as the NBA’s third-best offensive rebounding team. It didn’t help that the Clippers, without injuries, were already one of the league’s worst teams on the glass. The leading rebounder left on the Clippers’ active roster was 6-foot-5 guard Terance Mann.

“We can’t afford to have anybody standing around and watching,” Shaw said before the game.

The Clippers largely managed to keep the Timberwolves off the glass. They couldn’t, however, stop Minnesota from scoring in the interior, as the Timberwolves built a halftime lead while shooting better than 52% from the field.

The lack of rim protection was apparent. Even as Ibaka played well offensively, leading the Clippers with 17 points, he found himself getting mean-mugged by the 6-1 Patrick Beverley after the former Clipper made a second-quarter layup over him.

The Clippers have been operating with a next-man-up mentality as injuries and positive COVID tests have piled up — and that’s not just for the players. Not only is coach Tyronn Lue stuck quarantining in a Toronto hotel room, but associate head coach Daniel Craig (knee surgery) and assistant Jeremy Castleberry (protocols), normally the team’s defensive coordinators, were also out. That left Dahntay Jones — a player development coach in his second season on the Clippers’ staff — to handle the defense, Shaw said.

“We’ve had to scramble,” Shaw said before the game.

With the Clippers down 20 at the start of the fourth quarter, Shaw turned to a five-man unit of rookie Keon Johnson; Amir Coffey and Justise Winslow, each averaging less than five points per game; G League call-up Xavier Moon; and recent 10-day contract signee James Ennis III.

Surprisingly, the group gave the arena energy. But after Moon’s jumper cut the deficit to 13 with eight minutes left, the Timberwolves’ Anthony Edwards, who had 28 points, silenced the crowd with a pull-up three-pointer.

Denial of responsibility! TechiLive.in is an automatic aggregator around the global media. All the content are available free on Internet. We have just arranged it in one platform for educational purpose only. In each content, the hyperlink to the primary source is specified. All trademarks belong to their rightful owners, all materials to their authors. If you are the owner of the content and do not want us to publish your materials on our website, please contact us by email – [email protected]. The content will be deleted within 24 hours.
ClippersKeyLossnews updatePlayersroutedsports newssports update
Share