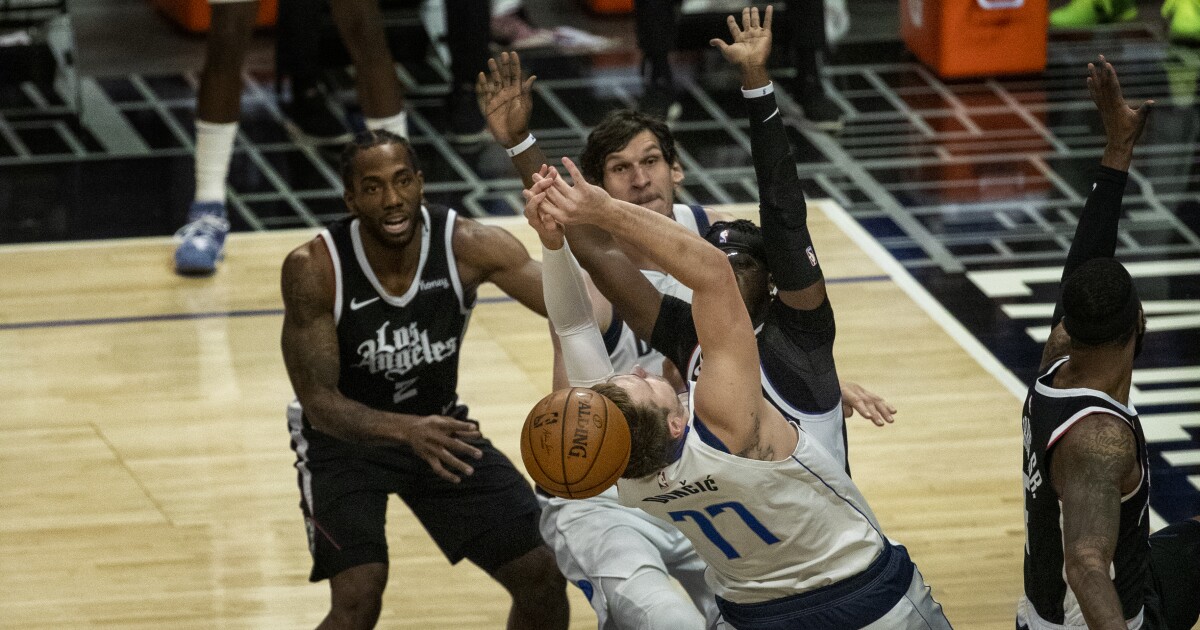 As the Clippers left Staples Center last week, trailing again in this first-round playoff series and unsure whether they would return, Paul George called the third quarter when so much had gone wrong something “that’s going to haunt us.”

It was an off-the-cuff remark by an All-Star. It also happened to be the perfect description of another imperfect game for a franchise that, for 50 years, has been defined by such postseason shortcomings.

All season, the Clippers have called that a thing of the past and last season’s second-round collapse against Denver a non-factor. They believed that winning short-handed throughout the season had steeled them, and that their shooting would sustain them.

Offered a chance to add another ignominious chapter to their history Sunday, nine months after crumbling in their previous Game 7, the Clippers instead continued their redemption tour into the second round following a 126-111 win against the Dallas Mavericks, their most forceful declaration yet that this roster is not haunted by the past.

Kawhi Leonard had 28 points with 10 rebounds, Marcus Morris scored 23, Paul George contributed 22 points and six rebounds, and Reggie Jackson had 15 points for the Clippers, who shot 50%.

Leonard is only the fourth player in NBA history to score at least 200 points while shooting at least 60% in a playoff series, joining Shaquille O’Neal (2000), Bernard King (1984) and Kareem Abdul-Jabbar (1977).

The mental mistakes that lost the Clippers’ first three home games of this series, particularly the way Game 5 unraveled, were gone amid a 24-4 run over the final six minutes of the third quarter. When Dallas cut a 19-point lead to seven with two minutes to play, behind Luka Doncic’s 46 points, their resilience could have finally wobbled. But Jackson and Morris answered with three-pointers on consecutive possessions and fans gripped one another in almost stunned celebration. The Clippers’ 20 three-pointers are the most made in Game 7 history.

One game after making one of 10 shots, Morris made eight of 15, including seven three-pointers.

Instead of a cringe, this ended in catharsis. Consultant and Hall of Famer Jerry West walked over to team owner Steve Ballmer’s seat and shook his hand with 41 seconds left in a celebration that didn’t always feel inevitable. The Clippers are only the fifth team to lose the first two games at home and rally to win the series.

“This team forced us to play on a nightly basis a full 48-minute game,” George said. “Let’s not again even get into last year. We’re on to a whole other season. We hung in there and stuck together and knew what it took to win tonight.

“Again, Kawhi stepped up big for us. Reggie stepped up huge for us, Marcus, I mean, everybody just brought it and played for one another, played hard, and we collectively got the win.”

Before tipoff, coach Tyronn Lue said he had not delivered a soaring message at the morning walk-through because Game 7s come down to “trust.” It had built behind the scenes throughout the series during film sessions, when Leonard said teammates realized they had left one another alone “on islands” defensively. Doncic was brilliant, again, adding 14 assists, but the Clippers’ rotations contributed to the Mavericks’ 27% three-point shooting, with Tim Hardaway Jr. making just one of nine from deep.

Nine months before, the Clippers’ offense sagged when their stars couldn’t score in the deciding game against Denver. On Sunday, George (10 assists) and Leonard (nine) pinged the ball around to open teammates, trusting a balanced attack could overcome Doncic’s one-man magic. Terance Mann finished with 13 points. Luke Kennard, virtually stuck to the bench through five games, scored 11.

“These games are not won with just one or two great players,” Leonard said. “You need a whole 17 or 16 players that you have.

Video highlights from the Los Angeles Clippers’ Game 7 victory over the Dallas Mavericks on June 6, 2021, at Staples Center.

“I think we had trust at the beginning, but we just had to dial in on what we were doing.”

The official record will show that this series began May 22, but that is not quite right. For the Clippers, it did not truly begin until six days later.

Down 19 points only seven minutes into the third game in front of Dallas’ howling crowd, the Clippers appeared to be staggering toward a second consecutive offseason hearing jokes at their expense and renewed questions about how a roster reconstructed last fall to win a championship could not advance past the first round.

“Down 30-11, we were one or two plays away from almost getting swept,” forward Nicolas Batum said. “And we find something in us like resiliency and some toughness, like, ‘OK, we can’t go down like that.’ We are a good team. We are a good team and we have to show it.”

They showed it in Game 3 with a rally, then in Game 4 with a change to a small-ball lineup. In Game 6, back on the road facing elimination, they evened the series again behind Leonard’s bravura performance. And their two-week test of will was capped Sunday.

Instead of reviewing how another series had gone wrong, Lue, who is now 4-0 coaching in Game 7s, left his postgame videoconference preparing for Utah.

“We can’t keep looking behind at what happened,” Lue said. “That s—’s over.”

Denial of responsibility! TechiLive.in is an automatic aggregator around the global media. All the content are available free on Internet. We have just arranged it in one platform for educational purpose only. In each content, the hyperlink to the primary source is specified. All trademarks belong to their rightful owners, all materials to their authors. If you are the owner of the content and do not want us to publish your materials on our website, please contact us by email – [email protected]. The content will be deleted within 24 hours.
ClippersDoncicsEliminategameLukamavericksnews updatepoints
0
Share

Apple Watch may get ‘Mind’ app, focus on mental health – Times of India