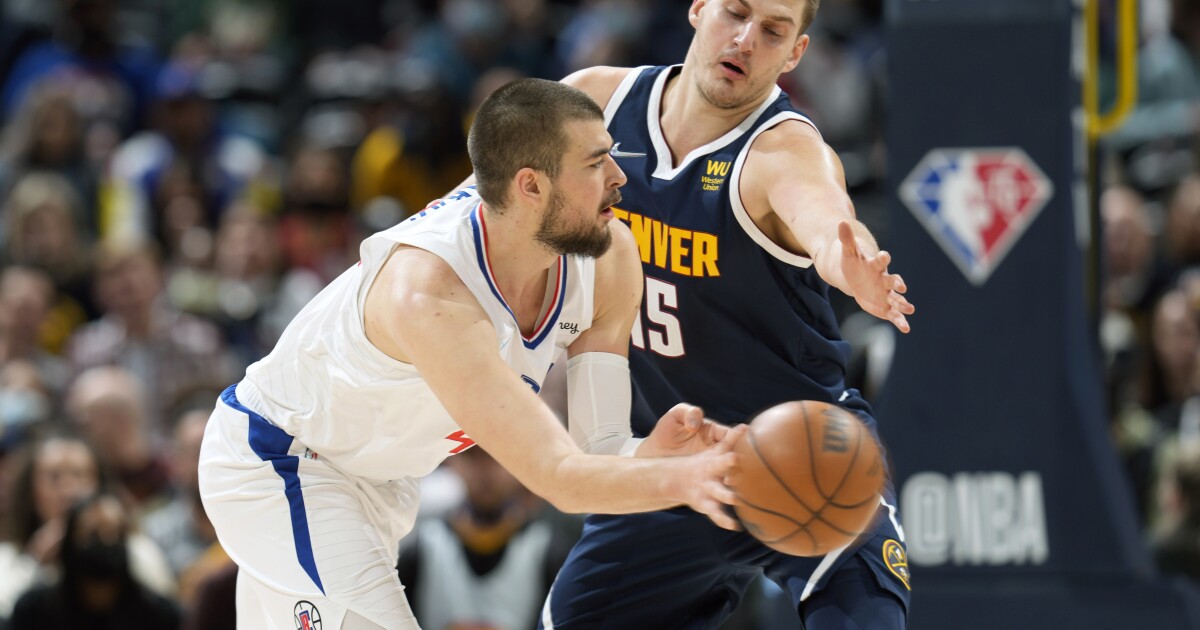 Clippers, without Nicolas Batum, can’t close out Nuggets in overtime

Gulping a bottle of water to calm a postgame fury unlike any seen in his year-plus as Clippers coach, Tyronn Lue waited to speak late Wednesday, his eyes never leaving a box score in front of him at a cloth-covered dais.

Twice after a 130-128 overtime loss to the Nuggets in Ball Arena, Lue said he was glad he had paused himself, “before I said some things I shouldn’t say,” he said.

He didn’t say it, but the sheet of paper before him did, including the 16 free throws taken by Denver star Nikola Jokic — four more than were taken by the entire Clippers roster — after the league’s reigning most valuable player stayed in the game despite charging an official during the first half, before he was restrained by his coach. Only 16 seconds into overtime, Lue was yelling at official Brandon Adair after a defensive three-second call: “How can you call that?”

He was upset because for four quarters, and overtime, the Clippers had come in waves, contributions coming from everywhere, only to lose a game played in Denver’s thin air, amid even thinner margins, because of a singular performance by Jokic.

Jokic scored 49 points, with 14 rebounds and earned his triple-double on a one-handed assist that traveled at least 45 feet, above the long-armed double team of 7-foot Ivica Zubac and 6-8 Amir Coffey, starting from in front of the Nuggets’ bench before dropping in the hands of Aaron Gordon in the opposite corner. His three-pointer with 2.2 seconds left in overtime broke a 127-all tie, all because of a pass that Lue said only Jokic and LeBron James likely could have made.

“It couldn’t be more perfect,” Zubac said. “I don’t think many people in this world can make that pass. That’s why he’s MVP of this league.”

Playing without Marcus Morris Sr. and Nicolas Batum, the Clippers pushed the ball on battering-ram drives by Justise Winslow, their lead on put-back baskets from Zubac’s career-high 32 points and the tension throughout the fourth quarter and overtime through one-on-one isolations pitting guard Reggie Jackson against Jokic.

But Jokic’s shot sent the crowd into hysterics and sent Nuggets reserve Davon Reed sprinting off the bench, too, mistakenly believing the game was over — drawing a technical foul, which pulled the Clippers within two points. But Jackson’s half-court heave at the buzzer did not fall, and all of the Clippers’ (22-24) plays to open their eight-game trip were effectively washed away.

“There is no moral victory,” Jackson said. “But this just showed who we can be with our men down.”

Zubac also had 10 rebounds, as well as eight points in overtime after nearly fouling out in the final minutes of regulation, saved only by a replay review. Jackson added 28 points, saying he had learned amid a recent shooting slump that he needed to be more forceful with his drives.

Despite playing without Morris (personal reasons) and Batum (health and safety protocols), despite three turnovers within their first six possessions, and making just one of their first seven three-point attempts, the Clippers took the lead and grew it to 14 in the second quarter by doing something they’d failed at in these teams’ first two meetings — winning the minutes when the Nuggets were most vulnerable.

In the six minutes that Jokic spent on the bench the Clippers outscored Denver by 11, the result of Winslow barreling down the court, looking every bit like an energized player who hadn’t played in a week, creating open looks, then catching a lob for a dunk from Isaiah Hartenstein.

The Clippers unfurled a 21-2 run, amid which Brandon Boston Jr. punctuated two three-pointers by looking over his shoulder and offering retorts toward a spectator seated in the third row whose wide-brimmed hat made him easy to pick out for Clippers running back on defense after made baskets.

Later in the second quarter Jackson twice cupped both hands over his mouth and blew kisses toward the same direction.

The fan, Nick Rems, a self-described longtime Nuggets fan who lives in Denver, said he had told Boston that he “should have stayed in college.”

“I wouldn’t say I want to motivate them,” Rems said. “But if I get a reaction, I’m winning.”

The Clippers soon had more pressing issues than a fan’s heckling. Jokic scored 10 points in the third quarter’s first six minutes to pull Denver within two behind a 12-1 run. Sitting on the Clippers bench, guard Terance Mann was soon whistled for a technical foul. Then Jokic earned his own by charging Adair and might have been ejected if not for coach Michael Malone rushing onto the court to restrain his best player from getting any closer.

When the Clippers lost their lead following free throws from Jokic with two minutes left in the quarter — shots in which he was serenaded by chants of “M-V-P” — they had not made a field goal in seven minutes. The Nuggets’ run, which ultimately reached 22-3, canceled out all of the Clippers’ first-half momentum. The teams entered the fourth quarter tied, then sat in near darkness as the arena turned down the house lights to play a highlight video of past fourth-quarter closeouts.

With four minutes to play, Boston and Jackson were chest-bumping at midcourt after Boston’s fourth three-pointer pushed the Clippers ahead by eight, their lead generated by Jackson’s one-on-one isolations against Jokic. When Jackson drove at Jokic with 38 seconds left, his floater pushed the Clippers ahead, 114-112, but after a tying basket, the Clippers gave Denver one last chance to win in overtime with 2.9 seconds left after a hesitation by Mann led to a shot-clock violation. It wasn’t damaging — Jokic’s baseline jumper as time expired misfired.

He played the role of closer over the next five minutes, scoring 11 points in overtime capped with the perfect pass.

Denial of responsibility! TechiLive.in is an automatic aggregator around the global media. All the content are available free on Internet. We have just arranged it in one platform for educational purpose only. In each content, the hyperlink to the primary source is specified. All trademarks belong to their rightful owners, all materials to their authors. If you are the owner of the content and do not want us to publish your materials on our website, please contact us by email – [email protected]. The content will be deleted within 24 hours.
BatumClippersClosenews updateNicolasNuggetsovertimesports news
Share

How to cheat at Wordle