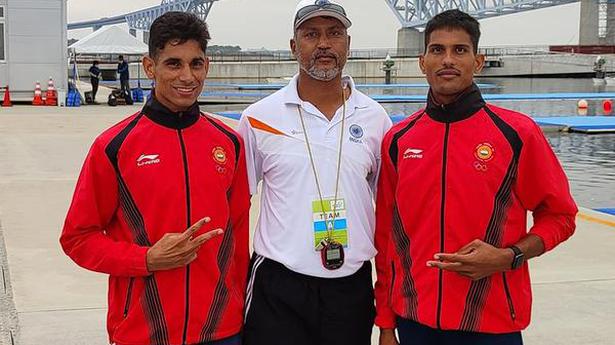 Coach Baig returns after a tough but rewarding stint

Life has not been easy over the last two months for chief national rowing coach Dronacharya Ismail Baig.

He had to guide his trainees in tough conditions in Tokyo, while back home in Hyderabad, his wife and younger daughter were battling the pandemic.

But Baig overcame these challenges, which he describes as some of the toughest in his career, and ensured the rowers qualified for an Olympics under his mentorship for the sixth time since the 2000 edition.

Arjun Lal Jat (Rajasthan) and Arvind Singh (Uttar Pradesh) made the cut for this year’s Tokyo Olympics in double scull after finishing second in the final race of the Asia/Oceania Continental qualifying regatta in Tokyo.

“Both Arjun and Arvind have been with me since 2018. They were in the reserves for the Asiad that year and won a silver in the Asian meet the next year,” said Baig.

The chief coach rued the missed opportunity for Jakar Khan. Khan finished fourth in men’s single sculls, but each country gets only one qualifying quota in any one category.

“Well, the qualifying event was held at the same venue where the Olympics competition is scheduled in the heart of Tokyo,” he said in a chat with The Hindu on his return home.

“Honestly, with the kind of strict protocols in place, we were worried more about getting a fever than about the qualification itself.

“Such was the tension for all of us as our temperatures were checked eight times every day and we had to report our location for verification via an app,” he explained.

“I can tell you one thing. If the Olympics are held with the same protocols in place in the wake of the pandemic, the aura and the atmosphere usually associated with the Games will not be there for sure,” he said.

“In hindsight, I feel that training in the bio-bubble at the Army Rowing Node in Pune since last September was worth it, with this qualification of Arjun and Arvind,” he said, relieved that the rowers made the cut and his family members are healthy.

Denial of responsibility! TechiLive.in is an automatic aggregator around the global media. All the content are available free on Internet. We have just arranged it in one platform for educational purpose only. In each content, the hyperlink to the primary source is specified. All trademarks belong to their rightful owners, all materials to their authors. If you are the owner of the content and do not want us to publish your materials on our website, please contact us by email – [email protected]. The content will be deleted within 24 hours.
Baigchief national rowing coachCoachCoachingDronacharya Ismail Baignews updateOlympicsReturns
0
Share

COVID-19: Experts caution against ‘irrational and non-scientific use’ of convalescent plasma

Italian Open | Gritty Nadal battles back from the brink