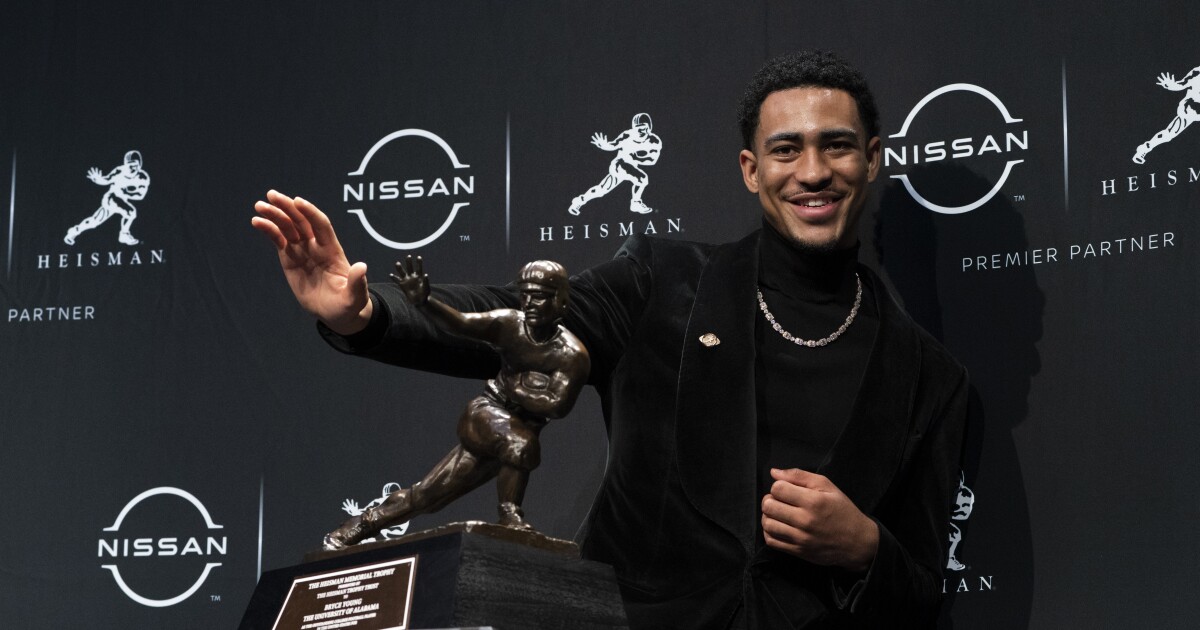 Column: Bryce Young gets his moment to celebrate Heisman Trophy at Mater Dei

It will be an official homecoming for Heisman Trophy winner Bryce Young of Alabama on Tuesday when Santa Ana Mater Dei High welcomes him for a celebration that will include adding his name to the “Heisman Lane” campus sign that already includes alumni Matt Leinart and John Huarte.

“This is an opportunity to just focus on great things that come from athletics,” his father, Craig, said.

Bryce will have his jersey retired and get to celebrate with people who helped put him on a path to success in high school and college.

His father understands that Mater Dei has been under scrutiny following a lawsuit filed in November by the family of a former football player who alleged a culture of hazing. This past month, another revelation came out that a police report had been filed last August of an alleged sexual assault of a football player in the locker room.

“I’ve learned not to talk about things I don’t know anything about,” Craig Young said. “That’s not the Mater Dei we experienced but doesn’t minimize what others might have experienced.”

Bryce Young grew up in Pasadena, and played quarterback for L.A. Cathedral for two years before transferring to Mater Dei.

His father said coach Bruce Rollinson allowed his son to develop into the quarterback he became and didn’t force him to conform to somebody who looked like past Mater Dei quarterbacks. He was the first Black quarterback in Mater Dei history and a rare outsider who had to deal with high expectations in succeeding quarterback JT Daniels, who was the Gatorade national player of the year.

“What he accomplished is remarkable and should be celebrated,” Craig Young said. “Bruce Rollinson is an amazing coach and he allowed Bryce to be Bryce.”

For maybe an hour or two Tuesday, everyone will get to focus on Bryce Young. It’s a worthy, positive distraction.

Others are still waiting to learn the results of a safety assessment the school announced in December when it hired a law firm to investigate its sports program. Not a word has been released on what was discovered. The only public response from the school has been to accuse the former athletic director of lying in her deposition that was critical of the school’s handling of locker room issues.

People inside and outside Mater Dei are waiting for the new president, Michael Brennan, to address issues of what appears to be a lack of institutional control if you believe the continuing revelations. Meanwhile, the football team continues to work out and prepare for the 2022 season under Rollinson, head coach since 1989 who was last seen being carried on the shoulders of his players after winning the CIF Open Division state championship in December.

At a spring seven-on-seven tournament this month, it was business as usual for the Monarchs. They’ve circled the wagons and are clearly in batten-down-the-hatches mode. That can only work for so long, though.

A lack of transparency is not an effective response to safety concerns no matter how many wins a team achieves or how many Heisman Trophy winners are produced.

Denial of responsibility! TechiLive.in is an automatic aggregator around the global media. All the content are available free on Internet. We have just arranged it in one platform for educational purpose only. In each content, the hyperlink to the primary source is specified. All trademarks belong to their rightful owners, all materials to their authors. If you are the owner of the content and do not want us to publish your materials on our website, please contact us by email – [email protected]. The content will be deleted within 24 hours.
BrycecelebrateColumnDEIHeismanMaterMomentnews update
Share

Explaining Hollywood: How to get a job as a hairstylist