Notice: amp_is_available was called incorrectly. `amp_is_available()` (or `amp_is_request()`, formerly `is_amp_endpoint()`) was called too early and so it will not work properly. WordPress is currently doing the `pre_get_posts` hook. Calling this function before the `wp` action means it will not have access to `WP_Query` and the queried object to determine if it is an AMP response, thus neither the `amp_skip_post()` filter nor the AMP enabled toggle will be considered. It appears the theme with slug `publisher` is responsible; please contact the author. Please see Debugging in WordPress for more information. (This message was added in version 2.0.0.) in /home/runcloud/webapps/techilive/wp-includes/functions.php on line 5313
 Column: Clippers show resolve, resilience when pushed to playoff abyss - TechiLive.in 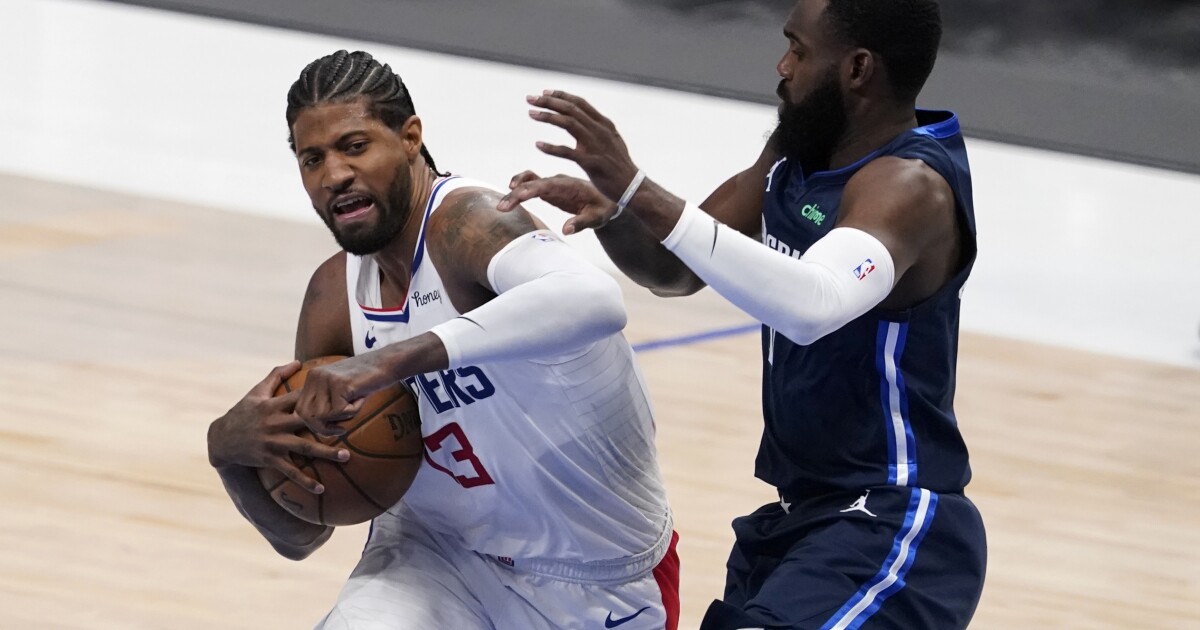 What do you know — the Clippers have a spine.

Pushed to the brink of another playoff embarrassment, with the roars of hostile fans filling their ears and the hot-shooting Dallas Mavericks filling the basket with three-point shots in the early going Friday at American Airlines Center, the Clippers were forced to ask themselves if they were made of better stuff than they’d been showing. They’d fallen 19 points behind in the first quarter. A third straight playoff loss loomed and with it, an inevitable recurrence of the postseason nightmares that have become their long-playing narrative.

When all seemed impossibly dark, the Clippers saw the light. They became feisty. Efficient. Spirited. They delved back into the defense-directed identity they’ve successfully inhabited at times but had misplaced while losing the first two games of their first-round playoff series at home.

They didn’t panic. They didn’t back down when they were challenged physically or emotionally. They made a stand, and they were rewarded on Friday with a surprising 118-108 victory.

“We took more pride individually and as well as collectively as a team,” Rajon Rondo said. “We didn’t leave each other on an island tonight, which we did last [in] Game 2, and that was a big emphasis as far as shrinking the floor.”

The victory that pulled them away from the abyss of postseason doubts and put them in position to tie the series on Sunday in Dallas was built on grit and guts and the big-time scoring of big-time players Kawhi Leonard (36 points on 13-for-17 shooting) and Paul George (29). That duo led the way, but every player who was on the court contributed a growl, a grunt, a defensive play or a timely shot to fuel the team’s growing sense of belief.

Terance Mann’s energy inspired them. Rondo’s poise, experience and eight assists set a tone. They played small ball and did it with big energy and big hearts, pretty much nullifying the scoring threats posed by every Maverick not named Luka Doncic.

Although Doncic scored a game-high 44 points, Dallas’ next-highest scorers were Maxi Kleber and Jalen Brunson, who each had 14 points. Dorian Finney-Smith and Kristaps Porzingis were a combined six for 20 from the floor and scored 15 points.

“We played defense,” George said. “This is the team that we are and the team we’ve been and the team we need to be, a team that’s going to play defense and play hard. Offensively, we have enough offensive weapons to get tough baskets and create easy opportunities, as well. But defensively, it’s just where we’ve got to be great, and I thought tonight we had a ton of flashes of that.”

Focusing on the defensive end of the game was an obvious answer, though it wasn’t easy to accomplish while the Mavericks were building a 30-11 lead. Doncic went to the bench for his usual rest with 4 minutes and 58 seconds left in the first quarter, giving the Clippers a foothold to start chipping away.

“I think we took a couple bad shots, and we know that we relax a little bit when we go up, so we got to work on that,” said Doncic, who scored 26 of his 44 points in the first half.

The Clippers had spent many focused hours since their 127-121 loss on Tuesday breaking down film, rereading the scouting reports, and talking among themselves about how they could be better. How they had to be better. On Friday they found the answer.

“It might be a good thing that we got down 0-2,” forward Marcus Morris Sr. said. “So now we can battle and find out where we at and keep fighting.”

They shouldn’t have had to learn their lesson by going to the extreme of nearly facing an 0-3 deficit in a best-of-seven series, a predicament no NBA team has escaped. But the most important takeaway from their comeback on Friday was that they got the defensive stops they so urgently needed and rediscovered the identity they had cultivated and cherished. Now, they have to do it again. And again. And again.

Leonard, typically understated, insisted he didn’t read too much into the Clippers’ emphatic response to adversity on Friday. “Won a basketball game. Came out and kept our composure in that first quarter and we were able to get a win,” he said. “But we haven’t done anything. We haven’t done anything, so, you know, won one game.”

That’s still one more game than it appeared they’d win when they faced that early 19-point deficit, before they found their spine and stood up straight and tall.

Denial of responsibility! TechiLive.in is an automatic aggregator around the global media. All the content are available free on Internet. We have just arranged it in one platform for educational purpose only. In each content, the hyperlink to the primary source is specified. All trademarks belong to their rightful owners, all materials to their authors. If you are the owner of the content and do not want us to publish your materials on our website, please contact us by email – admin@techilive.in. The content will be deleted within 24 hours.
abyssClippersColumnnews updateplayoffPushedresilienceResolve
0
Share