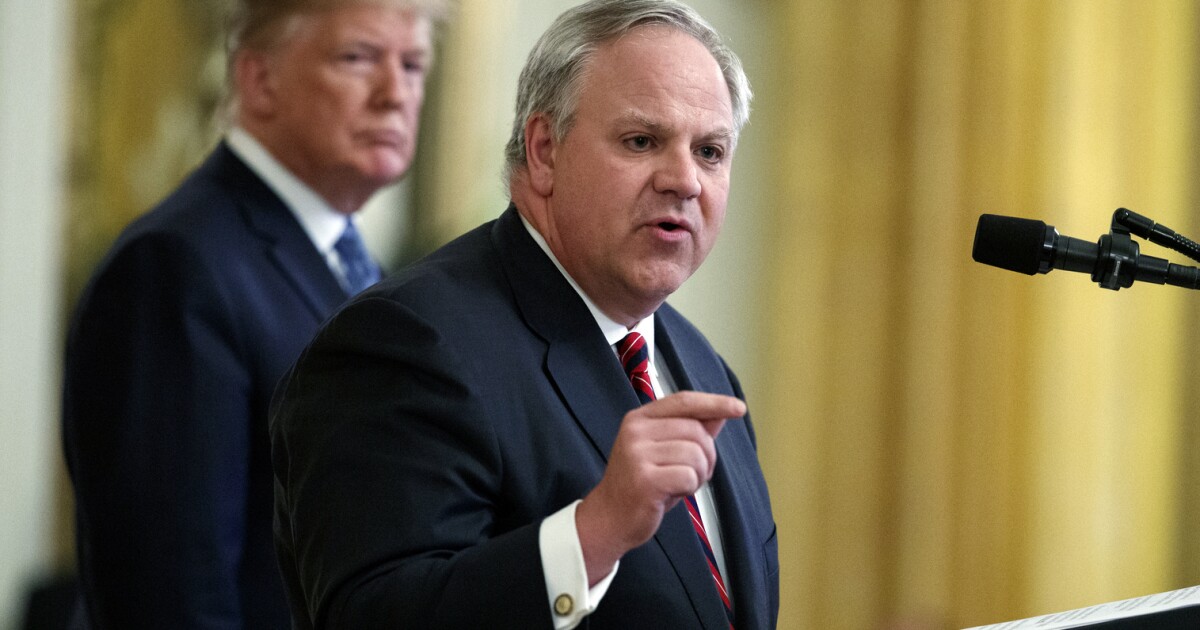 Column: How the odor of corruption from Trump’s administration persists to the present day

The Trump administration may be gone from Washington, but the acrid stench of corruption lives on.

Case in point: An allegation that former Interior Secretary David Bernhardt pressured agency personnel to approve a controversial Arizona housing development in return for political donations to then-President Trump by the builder and his associates.

The allegation came in a request issued Wednesday by House Democrats for a criminal investigation by the Department of Justice into whether the approval by the Interior Department and the contributions to Trump represent “a potentially criminal quid pro quo.”

The referral letter was signed by Rep. Raúl Grijalva (D-Ariz.), chair of the House Committee on Natural Resources, and Rep. Katie Porter (D-Irvine), chair of its oversight and investigations subcommittee.

In an email, Bernhardt called the letter “a pathetic attempt… to fabricate news.”

The committee request involved intricate maneuverings over environmental approval for the Villages at Vigneto, a planned community of 28,000 housing units, plus a golf course, resort and commercial development proposed for a 12,300-acre tract outside Tucson.

The project has been in the works for nearly 20 years but has been consistently opposed by environmental groups and questioned by the Interior Department’s Fish and Wildlife Service, which has long held that it requires detailed biological analysis by the Army Corps of Engineers to determine its impact on several endangered species.

The agency maintained that position until late 2017, when it suddenly reversed itself. (Its reversal has since been countermanded by the Biden administration.)

Around the time of the original reversal, the project’s developer, Michael Ingram, and several of his business associates made what the committee labeled unusual donations to the Trump campaign totaling $241,600, to the Trump campaign and the Republican National Committee — most of them on the same day, Oct. 6, 2017.

That was also the day that the Corps of Engineers switched its stance and moved toward approving the development and Bernhardt, then the deputy Interior secretary, met with a top Interior Department attorney.

Lanny J. Davis, a spokesman for Ingram, calls the referral from Grijalva and Porter “false, misleading, unfair, and strikes me as reminiscent of McCarthyism’s use of innuendo as a surrogate for fact.” He told me there was “no wrongdoing by Mr. Ingram” and that “the final decision was made based on the law and the facts.”

Davis also produced a 2019 exchange of letters between the Army Corps and the Fish and Wildlife Service in which both agencies attested that they had independently reviewed the decision-making process over Vigneto and judged it appropriate. Davis said the committee referral should have cited the exchange.

Among the political donors named by Grijalva and Porter are Arte Moreno, owner of the major league baseball Los Angeles Angels, and his wife, Carole. The committee says Arte Moreno, like most of the other donors named, has a “relationship” with the developer, Michael Ingram—in his case through their common membership on the board of the TGen Foundation, which raises money for biotech research in Arizona.

The committee letter doesn’t specifically accuse the Morenos or the other donors of wrongdoing. It does, however, ask the Department of Justice “to investigate and consider whether criminal charges should be brought against any party” for violating federal anti-bribery law.

The Morenos’ contributions correspond to what the committee says is a suspicious pattern, in which numerous donations were made on Oct. 6, 2017, the same day as key developments favoring Ingram’s development plans.

According to Open Secrets, a database of campaign contribution records, Arte and Carole Moreno each donated $5,400 to the Trump campaign on Oct. 6. These are the only donations to Trump by the Morenos on record, though they’ve expressed support for Trump in the past.

“This is absolutely ridiculous,” Marie Garvey, a spokeswoman for the businessman, told me. Referring to the Vigneto project, she said, “Mr. Moreno has nothing to do with this development. He is a longtime Republican supporter and donor and has served on the TGen board for several years along with several prominent businesspeople.”

Before delving deeper into the Vigneto machinations, a few words about Bernhardt and his role at Interior.

When Trump appointed Bernhardt as deputy secretary of the Interior — the No. 2 post at the agency — in April 2017, his potential conflicts of interest took center stage. As we reported, he would be prominently placed within an agency dealing with clients in the water and energy industries that had paid millions of dollars in lobbying and legal fees to his law firm, Brownstein Hyatt Farber Schreck.

Bernhardt pledged to recuse himself from matters related to his former clients for one year. Almost immediately after the year expired, he surfaced with an op-ed in the Washington Post attacking the federal Endangered Species Act — a statute over which he had sued Interior on behalf of the giant Westlands Water District in California.

The application of the Endangered Species Act to future water projects was of profound interest to Westlands and other agribusinesses like it, not to mention other industries Bernhardt represented as a private attorney.

In any event, even during the recusal period, Bernhardt was reported to have participated in discussions aimed at reopening the environmental analysis of water flows, with an eye toward increasing them. That would manifestly benefit his ex-client Westlands. Interior Department ethics officials twisted themselves in rhetorical knots to give Bernhardt’s actions a clean bill of health.

“Of the 27 former clients and employers with potential conflicts of interest that Bernhardt disclosed on his ethics forms,” the Center for American Progress noted, “lobbying disclosure data reveal that 20 have actively lobbied the Department of the Interior since the beginning of 2017.” The figure dwarfed “other Cabinet nominees’ known direct conflicts of interest.”

Zinke and Bernhardt presided over what the Union of Concerned Scientists termed a “monumental disaster” for science at the Department of the Interior in 2018. The Union of Concerned Scientists report detailed how in the space of two years they had turned Interior from a steward of public lands and natural resources into a front for the mining and oil and gas industries.

Bernhardt’s fingerprints were on some of the more disturbing assaults on science at Interior, the Union of Concerned Scientists found. These included a December 2017 order revoking and rescinding a sheaf of Obama-era directives and reports on how the department should integrate climate science into its work. The order effectively deleted Interior’s climate-change policy.

That brings us back to the Vigneto case.

The development had been the focus of long-term conflicts between the Army Corps, which was inclined to wave the project through, and Fish and Wildlife, which thought its potential impacts were serious enough to warrant high-level consultation between the two agencies as required by law.

The field supervisor for Fish and Wildlife overseeing the project, Steve Spangle, was consistently backed by his colleagues there and by superiors at Interior. The Environmental Protection Agency also raised objections to the project.

That changed after Trump took office. First, the Army Corps signaled its intention to approve the project without Interior’s agreement. Then, a flurry of meetings and calls involving Bernhardt, Ingram and others occurred, some of which did not appear in Bernhardt’s official schedule.

On Aug. 31, 2017, Spangle said, he got a call from Interior lawyer Peg Romanik in which he says he was instructed to change his position on Vigneto at the request of a “high level politico.” Romanik and Bernhardt had met that morning, though the topic of the meeting was not disclosed. Spangle said he worked under pressure to issue a changed opinion on Vigneto in a way that would not make the political influence obvious.

The Army Corps eventually gave the project its green light in October 2018, but suspended its approval the following February after environmental groups filed a lawsuit challenging its action.

Spangle retired from Interior in March 2018, and began to tell his story publicly. “I got rolled,” he told his local newspaper, the Arizona Daily Star, and later repeated to CNN. He said he was told by Romanik “that a high-level politico in the Department of Interior” had instructed her to call him to rescind his position.

He complied, he said, because “my job is that I work for the administration. The administration’s position takes precedence over mine.” But he said he had never before received political pressure over a decision in his 34 years of government service.

After the arrival of the business-friendly Trump administration, the agency suddenly staged an about-face for a well-connected Republican businessman.

That happened while Interior was being led by a team that saw its purpose as promoting development, downplaying scientific judgments, and running roughshod over environmental regulations of long-standing. Meanwhile, Trump’s campaign coffers got fattened up.

Denial of responsibility! TechiLive.in is an automatic aggregator around the global media. All the content are available free on Internet. We have just arranged it in one platform for educational purpose only. In each content, the hyperlink to the primary source is specified. All trademarks belong to their rightful owners, all materials to their authors. If you are the owner of the content and do not want us to publish your materials on our website, please contact us by email – [email protected]. The content will be deleted within 24 hours.
Administrationbusiness newsBusiness updateColumncorruptionDaynews updateodor
Share

India to shine bright at Cannes red carpet: Celebs look at it as a great start

Finding a PlayStation 5 Is About to Get Easier

Advice to Meat Eaters Amidst the Outbreak of Monkeypox