Notice: amp_is_available was called incorrectly. `amp_is_available()` (or `amp_is_request()`, formerly `is_amp_endpoint()`) was called too early and so it will not work properly. WordPress is currently doing the `pre_get_posts` hook. Calling this function before the `wp` action means it will not have access to `WP_Query` and the queried object to determine if it is an AMP response, thus neither the `amp_skip_post()` filter nor the AMP enabled toggle will be considered. It appears the theme with slug `publisher` is responsible; please contact the author. Please see Debugging in WordPress for more information. (This message was added in version 2.0.0.) in /home/runcloud/webapps/techilive/wp-includes/functions.php on line 5313
 Column: Kawhi Leonard's virtuoso game must be just the start for Clippers - TechiLive.in 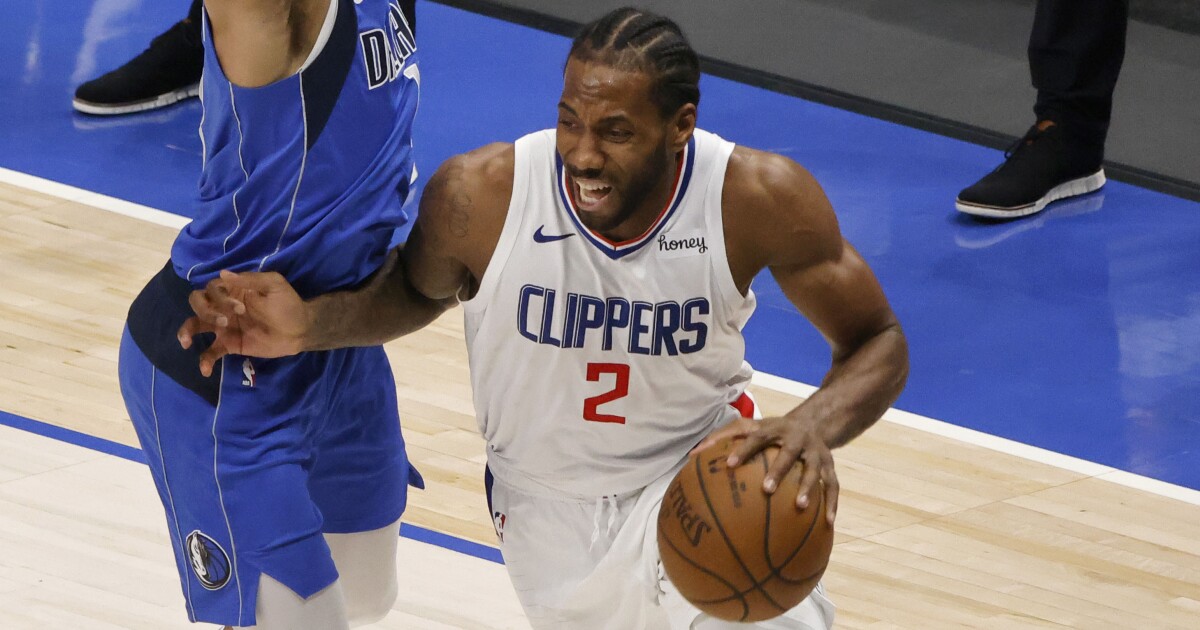 Column: Kawhi Leonard’s virtuoso game must be just the start for Clippers

He did what LeBron James couldn’t, which is why the Clippers are alive and the Lakers aren’t.

Twenty-three months after he agreed to move to the less-glamorous and frequently ridiculed franchise in Los Angeles, Kawhi Leonard became a bonafide Hollywood leading man.

Ignore for a moment that his masterpiece was staged in Dallas.

And if the Clippers are to take down the Dallas Mavericks at Staples Center on Sunday in Game 7 of their first-round series, Leonard will almost certainly have to reprise his scintillating 45-point solo act from a 104-97 victory in Game 6.

Leonard on Friday night was Joaquin Phoenix in “Joker.” He was Itzhak Perlman at the Disney Concert Hall. He was Richard Pryor on the Sunset Strip.

The stage was his, and his only, as he dominated Mavericks guard Luka Doncic on both ends of the court.

“Great players perform in big moments and he was huge, man,” Clippers coach Tyronn Lue said. “That just shows you who Kawhi Leonard is.”

Leonard matched his career playoff high in scoring, established two seasons earlier in Game 1 of a second-round series against the Philadelphia 76ers. His Toronto Raptors went on to win their first championship that season.

When the Clippers were down by seven points with less than six minutes remaining in the third quarter, Leonard went on a one-man 11-0 run.

He sank a mid-range jumper. He drained a three-pointer. He was fouled attempting another three and converted each of his free throws. He made another three in transition.

He scored the Clippers’ final 15 points of the quarter.

Leonard finished off the Mavericks by scoring 12 more points in the fourth quarter on five-of-five shooting.

Video highlights from the Clippers’ 104-97 victory over the Dallas Mavericks in Game 6 of their playoff series on June 4, 2021, in Dallas.

And that was only half of the story.

He was also the Clippers’ primary defender on Doncic. Leonard wanted the assignment, according to Lue.

Doncic finished with 29 points, 11 assists and eight rebounds, but the line was deceptive.

Remove the seven points he scored in the final 52 seconds with the outcome of the game already decided and Doncic made only eight of 20 shots for 22 points. He didn’t hit a three-pointer until there were fewer than five minutes left.

“All I could do is try to stay in front of him as much as possible, contest his shots and just try not put him on the [free-throw] line,” Leonard said.

Up to this point, the series was defined by Doncic, who averaged 35 points in the previous five games. As he was starting to be talked about in historic terms, Leonard put him back in his place.

“I mean, he destroyed us,” Doncic said.

The 22-year-old Slovenian couldn’t help but crack a smile.

Leonard delivered when the stakes were at their highest. More than a season was in jeopardy. With a loss, the Clippers’ ambitious project centered around Leonard and Paul George could have come to an end.

Leonard has one more year remaining on his contract after this season, but has the right to void it and become a free agent.

Even if Leonard returns, his partnership with George could dissolve if the Clippers are prematurely bounced from the postseason again. Failure in two consecutive seasons will have to make the team’s brain trust at least reconsider the wisdom of a nucleus consisting of two similar players. Trading George will become a possibility.

This was the backdrop of a performance for the ages, Leonard at 29 doing things James just couldn’t at 36.

James dominated the third quarter in Game 4 of the Lakers’ series against the Phoenix Suns. Leonard had a quarter like that, then another, and another. He scored 13 points in the second quarter, 17 in the third and 12 in the fourth.

Just for his team to avoid an embarrassing first-round elimination, he will have to deliver a few more quarters like that on Sunday.

And if he is to lead the Clippers to places they’ve never reached before, he will have to produce several more after that.

Denial of responsibility! TechiLive.in is an automatic aggregator around the global media. All the content are available free on Internet. We have just arranged it in one platform for educational purpose only. In each content, the hyperlink to the primary source is specified. All trademarks belong to their rightful owners, all materials to their authors. If you are the owner of the content and do not want us to publish your materials on our website, please contact us by email – admin@techilive.in. The content will be deleted within 24 hours.
Loading...
ClippersColumngameKawhiLeonardsnews updatesports newssports update
0
Share

Apple WWDC 2021: From iOS 15 features to new MacBook Pros, what to expect