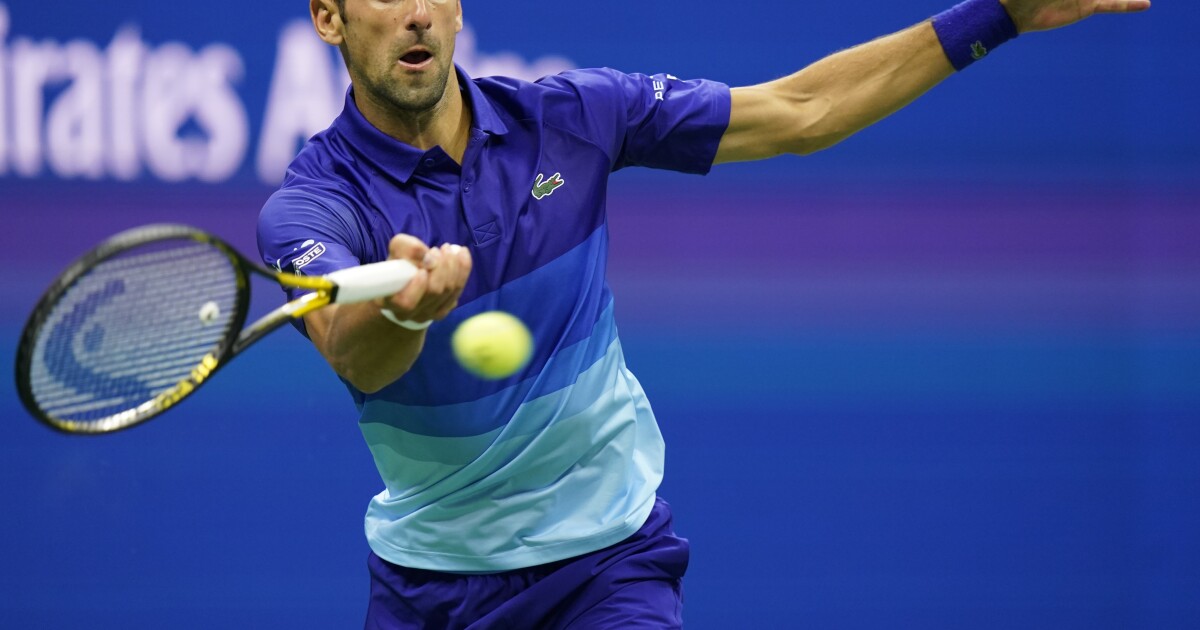 Thanks to a blast of sunshine and energetic cleanup efforts, a tickling wind and a few puddles were all that remained at the Billie Jean King National Tennis Center as reminders of the vicious storm that swept through the New York City area Wednesday night and flooded streets, highways, and subway stations.

Other than slightly delaying the start of Thursday’s matches for players who got caught in snarled traffic, it was back to business as usual at the U.S. Open. For No. 1 women’s seed Ash Barty, business as usual meant a 6-1, 7-5 win over 18-year-old Clara Tauson of Denmark. For No. 1 men’s seed Novak Djokovic, it meant keeping his calendar Grand Slam hopes alive with a 6-2, 6-3, 6-2 rout of Tallon Griekspoor of the Netherlands, who gave away 120 places in the rankings.

Djokovic, who’s trying to win a men’s-record 21st Slam singles title and break his tie with Roger Federer and Rafael Nadal — both missing here due to injury — was clinical against Griekspoor. Fans at Arthur Ashe Stadium tried to back the underdog but their sympathy wasn’t nearly enough to help Griekspoor become competitive.

Djokovic formed his strategy after watching Griekspoor’s first-round victory over Jan-Lennard Struff. “He was serving really well,” Djokovic said. “So I knew that the keys of the match, one of the biggest keys, is my return, trying to make him play, trying to make him move. He’s not the greatest mover on the court. I tried to give him always a different look.

“All in all very good, very good. I’m very pleased with the level of my tennis. All is going in the right direction.”

“He’s one of the quickest and most talented players that I’ve seen in my lifetime, in my career,” Djokovic said. “I think it’s important for me to serve well and try to take off the pace a little bit because he likes the pace. He likes to hit the ball early, protect the line. I look forward to a good challenge.”

Nishikori seems less eager about the matchup. “It’s not something I love to play all the time because, I mean, obviously he’s the toughest opponent, one or two. I rather have someone rank lower,” Nishikori said. “I mean, I always love the challenge. Even though I had a bad record, I always try to be positive. I’m sure it’s going to be tough one, but I do my best.”

Barty calmly found solutions when Tauson pushed back in the second set on Thursday, notably by using her slice to control the tempo. Barty’s ability to adjust quickly and intelligently are key assets as she pursues a first Slam singles title in a hardcourt event; she prevailed on clay at the 2019 French Open and on grass at Wimbledon this year.

“I don’t come into this tournament with any expectation of myself to feel entitled to go deep into the tournament or win the tournament or whatever it may be,” Barty said. “I just have to play each and every match as I would every other tournament and be prepared to play my best tennis as best I can on that given day against my opponent.”

Without Federer, Nadal and Serena Williams — who has a torn hamstring — the U.S. Open has lost a big chunk of its star power. But their absence has given young players an opening, and some on Thursday seemed poised to capitalize: No. 4 men’s seed Alexander Zverev lost only four games in his second-round win over Albert Ramos-Vinolas, and No. 11 women’s seed Belinda Bencic lost four games in defeating Martina Trevisan. No. 6 Bianca Andreescu of Canada, slowed by injuries since she won here in 2019, served six aces and broke Lauren Davis’ serve six times for a straight-sets win that put her into the third round.

Getting back to business as usual was a relief after Wednesday’s weather-driven chaos. Djokovic and Barty each took care of their business convincingly.

Denial of responsibility! TechiLive.in is an automatic aggregator around the global media. All the content are available free on Internet. We have just arranged it in one platform for educational purpose only. In each content, the hyperlink to the primary source is specified. All trademarks belong to their rightful owners, all materials to their authors. If you are the owner of the content and do not want us to publish your materials on our website, please contact us by email – [email protected]. The content will be deleted within 24 hours.
Loading...
BusinessColumnnews updateOpenreturnseedssports newssports update
Share

Majority of Salvadorans Do Not Want Bitcoin, Poll Shows