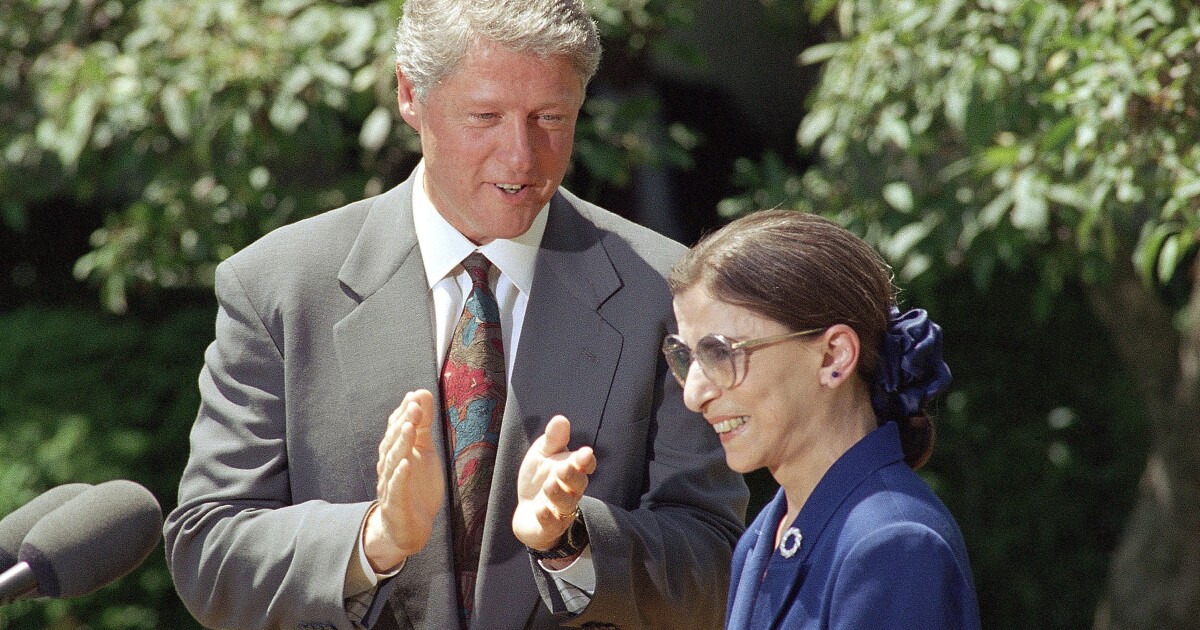 Column: Why we need a term limit for the Supreme Court

The Supreme Court’s now-confirmed intention of overturning the half-century-old protection for abortion rights in Roe vs. Wade is energizing the debate over how to rein in the court’s extreme conservative slant.

Expanding the court beyond its current complement of nine justices has long been the most widely discussed option.

Another idea may be gaining traction, however: Eliminating the justices’ right to lifetime appointments by imposing a term limit. This option, which has been discussed for decades, received its most recent airing in March at a roundtable among law professors sponsored by Sanford Levinson of the University of Texas School of Law.

“Life tenure today means a significantly longer tenure than it meant in 1789.”

“It is telling that all of us seem to be fully comfortable with the idea of term limits,” Levinson wrote after the event. “It is getting harder and harder to find anyone who genuinely defends either as ‘necessary’ or even ‘proper’ the truly exceptional national American practice of ‘full-life’ tenure that allowed John Paul Stevens to serve for 34 years until he turned 90.”

Levinson is correct. The Founding Fathers almost certainly did not expect Supreme Court justices to serve that long, and for most of American history they didn’t.

The average tenure on the court was 15 years until the 1970s, when it shot up to nearly 26 years. By 2005, the average age of justices at death or resignation was nearly 79, a record.

“Life tenure today means a significantly longer tenure than it meant in 1789,” Steven G. Calabresi and James Lindgren of Northwestern University observed in 2015. The average has plainly risen since then — Ginsburg died in office at 81, Antonin Scalia at 79. Stephen Breyer retired this year at 83 and Anthony Kennedy in 2018 at 82.

The trend is an artifact of improved healthcare. The average age of Supreme Court justices at the time of their appointment has remained stable since the late 1700s at about 50 to 55, but life expectancy since then has soared.

Life tenure for judges doesn’t only make the U.S. an outlier globally, Levinson wrote, but sets the federal government apart from the states, only one of which (Rhode Island) grants its supreme court judges life tenure. In all other states, the high judges either have fixed terms or are required to step down at age 70.

The poll was taken after the leaked disclosure Monday of a draft opinion by Justice Samuel Alito overturning Roe vs. Wade, the 1973 decision that guaranteed abortion rights nationwide.

On the negative side, imposing a term limit on the justices may be legally more difficult than expanding the court. The constitutionality of subjecting Supreme Court justices to fixed terms via legislation rather than through a constitutional amendment is open to question, and the amendment process is inherently more complicated than congressional action. Changing the number of justices, on the other hand, unmistakably falls within congressional authority.

Before delving into how to fix the Supreme Court, let’s examine how it’s broken.

It has become clear in recent years that the court has moved well to the right of American political sentiment.

Legal experts Nancy Gertler and Lawrence Tribe, who were members of a commission established by President Biden to weigh options, wrote last year that “the anti-democratic, anti-egalitarian direction of this court’s decisions about matters such as voting rights, gerrymandering and the corrupting effects of dark money” made reshaping the court imperative. (They favored expanding the court “as soon as possible.”)

A wide gulf plainly exists between what appears to be a court majority restricting abortion rights and public opinion, which overwhelmingly favors access to abortion in some or all circumstances. Only 20% of Americans think abortion should be banned entirely.

The reasons for the divergence of public opinion and court actions aren’t hard to find. One is the increasing politicization of the appointment process, in which a justice is nominated by the president and confirmed by the Senate.

That count includes conservatives Neil Gorsuch and Antonin Scalia, and then to rush Barrett’s nomination through in the waning days of the Trump presidency; and Biden’s successful appointment of Ketanji Brown Jackson.

Life terms for the Supreme Court has led to this uneven distribution of appointments. To some extent this is the luck of the draw.

Following the 12-year tenure of Franklin Roosevelt, who appointed eight justices, Democratic presidents were consistently shortchanged — Bill Clinton and Obama got only two appointments each during their eight White House years and Jimmy Carter none, while George H.W. Bush got two in his sole term and Trump three in his sole term. No Democratic president was able to appoint a justice in the 26 years between Lyndon B. Johnson’s appointment of Thurgood Marshall in 1967 and Clinton’s of Ginsburg in 1993.

The prospect of open-ended service on the court encouraged the justices themselves to try gaming their retirements. Typically they tried to hang on until they could be assured that a like-minded president would appoint their successor (not that this invariably worked). The result was the continued service of justices who were plainly impaired mentally or physically.

That has prompted concerns about what legal scholar David J. Garrow labeled “mental decrepitude” on the court. The best known example for Supreme Court aficionados is probably that of William O. Douglas, whose 1974 stroke left him so debilitated that his colleagues on the bench secretly agreed to hold over any cases on which Douglas would cast the deciding vote to break a 4-4 tie.

Douglas retired in 1975 and died in 1980, at age 81. (As a personal aside, Douglas gave the keynote address at my college commencement the year before his stroke, and he was already incoherent.)

The dangers of open-ended Supreme Court terms are illustrated by the case of Ginsburg, a liberal icon who hung on through repeated bouts of cancer until she died in 2020 at age 81, handing an open seat to Trump, who filled it with the arch-conservative Barrett.

“Some of us remain truly angry,” Levinson wrote, that Ginsburg “chose to roll the dice with the country’s future for no good reason other than her own vanity.”

That brings us back to the question of a term limit for Supreme Court justices. The most common version of this proposal is for a term limit of 18 years, combined with a permanent fixing of the court’s size at nine. The goal would be to provide an opening on the bench every two years, or two in every presidential term.

Fixed terms for justices would offer at least three virtues. It would help make the Supreme Court more reflective of contemporary political mores — justices in their 50s and 60s would surely be more attuned to the ebb and flow of social movements than those in their 80s.

It would reduce the political stakes for any nomination, because the prospect of using an appointment to affect the partisan tilt of the court into the limitless future would vanish.

It would also reduce the likelihood that political extremism would take hold of the court. At the Levinson roundtable, Lori A. Ringhand of the University of Georgia estimated that had the 18-year rule been in effect starting with Bill Clinton’s term in 1993, the court would comprise “four strongly liberal justices, three strongly conservative justices, a moderately conservative justice, and a moderately liberal justice” rather than today’s 6-3 conservative majority.

“A court so comprised might well find common ground on many issues,” Ringhand speculated. “More fundamentally, it almost certainly would better represent the constitutional preferences of the American people.”

To those who might object that this system would pare away extreme liberal as well as extreme conservative leanings, one can merely reply: If only. For most of American history, and particularly recent history, the court has been a bulwark of conservatism.

The liberalism of the Warren Court of the 1950s and ‘60s was an aberration, its image as a beacon of progressivism derived from two major factors — the presence among its members of long-serving liberal lions Hugo Black, William J. Brennan and Douglas, as well as its landmark 1954 anti-segregation ruling in Brown vs. Board of Education.

The remaining question is whether a Supreme Court term limit is constitutional. The best one can say is that expert opinion is divided. The governing language in the constitution is the “behavior clause,” which specifies that federal judges at all levels “shall hold their Offices during good Behaviour.”

Some experts say that’s the only condition placed on the term of justices, which means that change would require a constitutional amendment — proposed by a two-thirds vote of both houses and ratified by three-fourths of the states — obviously a politically fraught and time-consuming process.

But some say the Constitution’s drafters designed the clause only to guarantee that judges would be immune to pressure from the executive and legislative branches, not that no other conditions could be placed on their terms of service.

Some also assert that even if the clause mandates lifetime service, that requirement can be met by limiting judges to 18 years on the Supreme Court bench and transferring them to appellate or district courts after that, and guaranteeing a lifetime salary.

No one ever said restructuring the Supreme Court would be easy. FDR learned that from the failure of his court-packing scheme, which aimed to produce and solidify a liberal bench, but which almost brought the entire New Deal to a screeching halt.

But with this court now poised for overtly partisan purposes to scrap a legal principle that has protected women’s reproductive rights for more than a half-century, the effort is necessary and urgent.

No change could be implemented without a delay of several years at least. But with the abortion ruling now dominating political debate in America, the time to start is now.

Denial of responsibility! TechiLive.in is an automatic aggregator around the global media. All the content are available free on Internet. We have just arranged it in one platform for educational purpose only. In each content, the hyperlink to the primary source is specified. All trademarks belong to their rightful owners, all materials to their authors. If you are the owner of the content and do not want us to publish your materials on our website, please contact us by email – [email protected]. The content will be deleted within 24 hours.
business newsBusiness updateColumnCourtlimitnews updateSupremetechi live
Share

Musk sued by Twitter investors for delayed disclosure of…