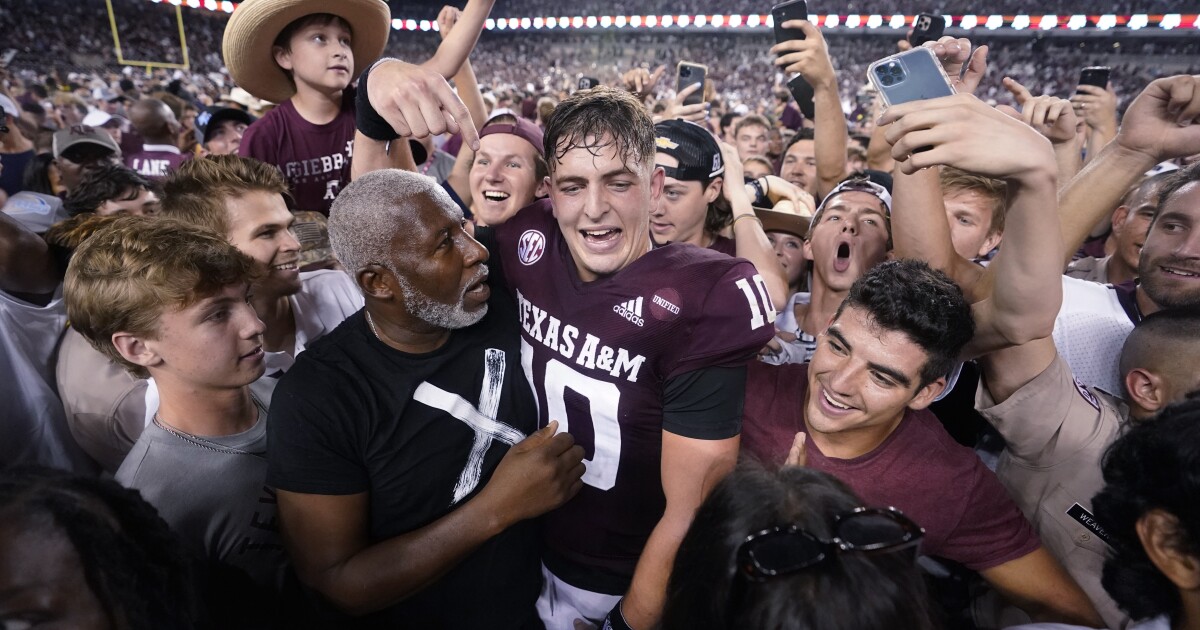 Commentary: Alabama’s stunning loss reminds us that anything can still happen in college football

A week ago, Texas A&M quarterback Zach Calzada walked off Kyle Field so vulnerable he couldn’t hide his emotions after a shocking loss to Mississippi State.

Saturday night, Calzada injured his lower leg while delivering a game-tying touchdown pass to pull the 17-point underdog Aggies into a 38-38 tie with No. 1 Alabama. Now the whole country was watching and wishing the kid who started the season as an unknown backup would find his way back into the spotlight. Minutes after he was helped off the field, there was Calzada scampering for a first down on his bum limb and willing Texas A&M into position for what would be the game-winning field goal.

Quarterbacks were the story all day long during an unforgettable college football Saturday. In the Red River Rivalry, Oklahoma true freshman quarterback Caleb Williams came in for junior Spencer Rattler — just two former five-star, can’t-miss prospects passing by one another in the early afternoon at the Texas State Fair — and led the No. 6 Sooners to a thrilling 55-48 comeback victory over No. 21 Texas.

In Iowa City at the day’s top-five showdown, No. 4 Penn State led No. 3 Iowa 17-3 in the second quarter when Sean Clifford, the Nittany Lions’ veteran starting quarterback, exited with an injury. Penn State had to play inexperienced backup quarterback Ta’Quan Roberson, who understandably was not up to the task, and the Hawkeyes escaped with a 23-20 victory.

But Calzada was the day’s best quarterbacking story. This was the kid who took over for injured Haynes King and engineered a 10-7 win against a bad Colorado team in Denver and then could not get Texas A&M moving during losses to Arkansas and Mississippi State that sent the Aggies tumbling out of the top 25.

The 17-point spread does not do justice the unthinkable nature of Texas A&M’s 41-38 upset of Alabama on Saturday night in College Station. Because nobody could have fathomed Calzada taking down Nick Saban’s latest juggernaut, quarterbacked by Heisman Trophy favorite Bryce Young, another one of those five-star prospects whose talent we know well from his time at Santa Ana Mater Dei.

Calzada completed 21 of 31 passes for 285 yards and three touchdowns and gave the entire sport what it’s been craving: proof that in college football, anybody on any day can beat any team — a reality that most of the country lives with on a weekly basis but certainly not the Alabama Crimson Tide.

Now, don’t get me wrong, Texas A&M is no typical underdog. Coach Jimbo Fisher got a contract extension before beating Alabama that will pay him $9 million per year. But the lack of faith in Calzada entering Saturday night — combined with defending national champion Alabama’s 19-game win streak — made Texas A&M’s victory feel like one of the biggest upsets the sport has seen in a long time.

College football needed this. As chaotic as 2021 has felt through six weeks — Clemson has two losses; Oregon knocked off Ohio State in Columbus and then lost to Stanford; Cincinnati won at Notre Dame to put itself in true playoff contention; and freaking Iowa is going to be ranked No. 2 this week — it still seemed inevitable that Alabama and Georgia would go 12-0 and the loser of the SEC Championship Game would easily make the playoff semifinals, setting up a rematch in the College Football Playoff championship game.

The Bulldogs and Crimson Tide could still end up lording over the sport in December and January, but now there’s a clear path to 2021 becoming the closest thing we’ve seen in a while to the 2007 season that gave us Kansas, Missouri, West Virginia, South Florida and Boston College as title contenders. (Of course, this being college football, it ended with two-loss LSU beating Ohio State in a forgettable national championship game).

Maybe this season won’t end so predictably. At a minimum, Georgia or Alabama will surely be in the four-team field. But as of now, they’d be joined by Iowa, Cincinnati and maybe Oklahoma (despite the Sooners’ spirited win today and the emergence of Williams, they don’t inspire confidence they will run the table).

Honestly, I’m disgusted with myself for even mentioning the playoff after a day like Saturday. We have seven weeks left in the regular season, and we should all thank Zach Calzada for reminding us that we actually have no clue what is going to happen the rest of the way.

As soon as Rattler was benched Saturday, the speculation began regarding the future of Oklahoma’s quarterback, who was largely assumed to be the first pick in the 2022 NFL draft.

Will he enter the transfer portal Sunday morning? Will he remain with the Sooners and let the season play out? What about just focusing on preparing for the draft?

If I was an advisor to Rattler, I would tell him to stick with Oklahoma and show that he can be an unselfish teammate and leader and then decide whether to transfer or declare for the draft.

He has already played in six games, so he cannot redshirt this year or maintain any eligibility. His team is a playoff contender, and I can’t imagine a scenario where the Sooners — even if Williams is named the starter — won’t need Rattler to step in at some point in a key moment.

Maybe I’m naive, but I think NFL general managers still care about intangibles, including how one reacts when things aren’t going well.

The best example for Rattler is one he should know well: Jalen Hurts, who stuck with Alabama after losing his job to Tua Tagovailoa and helped the Crimson Tide make the national championship game in 2018 before transferring to Oklahoma.

Hurts didn’t put himself over his team at any point and now he’s the Philadelphia Eagles’ starting quarterback. Rattler should feel comfort that the path doesn’t have to be linear.

Before Williams entered the game and busted a 66-yard touchdown run in the second quarter, the Longhorns led the Sooners 28-7, and it looked like Steve Sarkisian had hit lightning speed instilling his “all gas, no brakes” mantra in Austin.

Sure, this is the Big 12, but 48 points should be able to win you a rivalry game. Oklahoma got down but smartly did not give up on its running game because it knew it didn’t have to abandon the game plan against this Texas defense. The Sooners rushed for 339 yards, led by running back Kennedy Brooks’ 217.

By the time Brooks waltzed in for a game-winning 33-yard touchdown run, it was clear the Longhorns were too wiped to bother tackling him and forcing a field-goal attempt. Sark rightfully looked sick.

Sarkisian has to strengthen the backbone of this program. Catchy slogans and amazing offensive skill talent like Bijan Robinson and Xavier Worthy won’t be enough to bring Texas “back.”

Call it a big win

The Jim Harbaugh apologists among the Michigan fan base like to say that a game is only big until the Wolverines win it. At that point, the result gets picked apart and downgraded, and fans shift their focus to the next big game that Harbaugh must win.

There’s some truth to that, but Harbaugh has earned the criticism he has received in recent years.

No. 9 Michigan’s 32-29 victory at Nebraska Saturday night was big, regardless of the Cornhuskers’ 3-4 record. Michigan quarterback Cade McNamara said afterward that past Michigan teams would have lost under these circumstances on the road — the Cornhuskers came back from a 13-0 halftime deficit to lead by 3 in the second half — and he’s absolutely right.

There’s no telling if Michigan will beat Michigan State, Penn State and Ohio State down the stretch. But Harbaugh’s offseason moves — hiring younger assistants including defensive coordinator Mike Macdonald in place of Don Brown — have worked. The program seems to be on solid footing again after a humbling 2020.

Michigan’s trip to Michigan State Oct. 30 should be a top-10 showdown.

We’re about halfway through the regular season, so it’s a good time to start thinking about the Heisman.

Mississippi quarterback Matt Corral, a Long Beach Poly graduate, should be the favorite right now. He’s a marvelously entertaining player who will put up more than enough numbers, and Lane Kiffin’s Rebels are 4-1 and heading toward a magical season.

Denial of responsibility! TechiLive.in is an automatic aggregator around the global media. All the content are available free on Internet. We have just arranged it in one platform for educational purpose only. In each content, the hyperlink to the primary source is specified. All trademarks belong to their rightful owners, all materials to their authors. If you are the owner of the content and do not want us to publish your materials on our website, please contact us by email – [email protected]. The content will be deleted within 24 hours.
AlabamasCollegeCommentaryfootballhappenLossnews updatereminds
Share