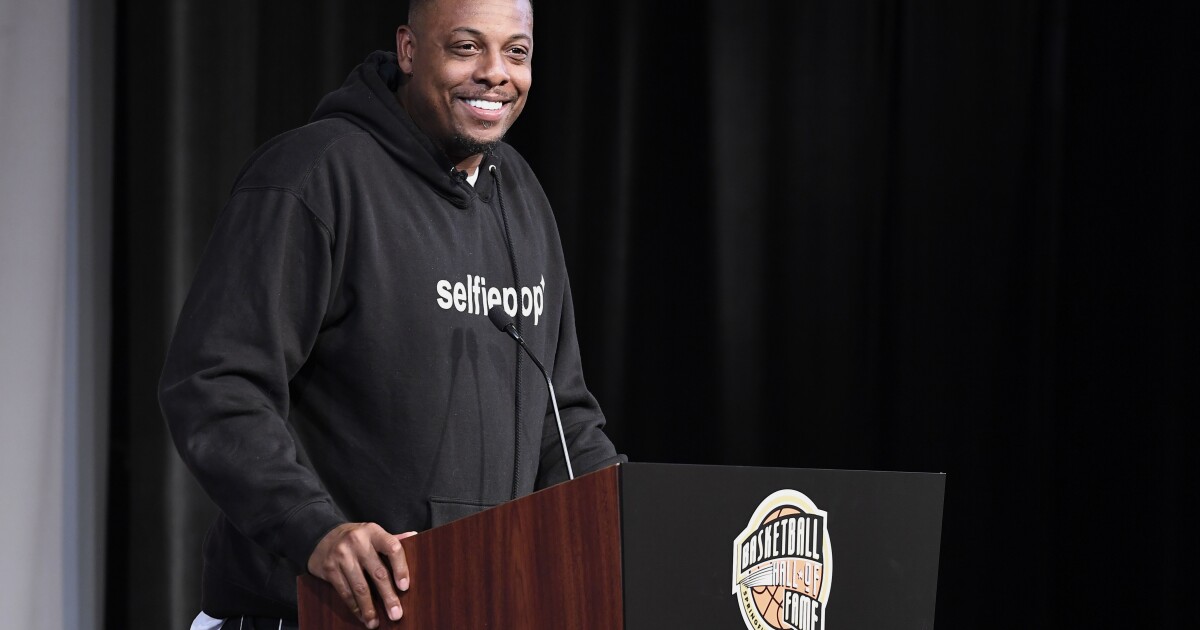 Commentary: For Paul Pierce, it was to heel and back for Hall of Fame career

On Saturday in Springfield, Mass., some of the best to play basketball, coach and advocate for the game will be celebrated. The moment demands it — enshrinement into the Naismith Memorial Basketball Hall of Fame is desired by many and accomplished by few.

Yet the road there isn’t filled with just made jumpers and with championships. It’s also paved with the pain that sports cruelly creates, circumstances in which a hometown kid could be a hero in his own story and a villain in his hometown.

That is Paul Pierce’s story — from growing up in the shadows of the Great Western Forum to helping reignite the fire between the Lakers and his Boston Celtics. While sports needs its heels, it isn’t always easy to be cast as one.

“It was tough. And I’ll tell you guys why it was tough,” Pierce said Friday. “You know, being in L.A., being a kid from Los Angeles playing for Boston — yes, a rival — but, you know, a kid from L.A. to get booed? Being at home? … You know, that wasn’t really a great feeling. You know, being a kid from Inglewood, Los Angeles area, getting booed at home — a place where I made a name for myself. Inside, I didn’t feel good. But I knew I had to embrace it and I knew what it was. It’s because of the jersey I wore.”

No Lakers are a part of this class, but the specter of the organization played a gigantic role in keeping so many of the 2021 inductees from reaching the highest heights. In Pierce’s case, his triumphs in Boston never could be fully celebrated in his hometown, a pain he’s still taking with him into the Hall.

That shouldn’t be what people think about when Pierce enters the Hall of Fame this weekend. Los Angeles should be proud that he’s on the top of the Celtics’ all-time scoring list, that he graduated from Inglewood to star at Kansas before becoming an NBA champion and a 10-time All-Star.

“I’m just happy I’m able to create some history with one of the greatest sports franchises ever,” Pierce said.

For Rick Adelman, Los Angeles shaped his basketball mind — and kept him from winning NBA titles.

A star player from Compton while at Downey Pius X, Adelman went on to become one of the most decorated players to attend Loyola Marymount before becoming a fixture in NBA backcourts and on sidelines. Yet whether it was with the Portland Trail Blazers or later with the Sacramento Kings and Houston Rockets, his hometown Lakers always were in the way when he coached.

Between the 1989 playoffs and the 2009 playoffs, Adelman’s teams were eliminated by the Lakers seven times.

“Going back to L.A. was always special,” Adelman said. “It wasn’t very much fun when you lost all the time. But I had family there were sisters and brothers, my mother and father were there. So it was always a good experience. And they were always so supportive. It was kind of fun to have them come to the games, and especially if you won.”

Adelman won a lot — 1,042 regular-season games — advancing twice to the NBA Finals but never winning them.

“I think we put too much emphasis on what we don’t have,” former Detroit Pistons center Ben Wallace said.

It didn’t matter that Wallace had to make it as a defender and as a rebounder, that Adelman grinded out wins all over the Western Conference, that Pierce had to travel across the country to create a legacy that got him booed as an All-Star in Los Angeles.

But it’ll be Adelman and Pierce representing for Los Angeles, even if the latter spent the bulk of his career at odds with the city’s largest, loudest fan base.

“I couldn’t have scripted it any better,” Pierce said. “… That’s just pretty much the story of my career — being the underdog, not really being liked. You know, I guess somebody has to be the villain. And if that’s, you know [how] I’ve been labeled and I’m able to win in a jersey that people didn’t like, then so be it. I accomplished a lot of my goals. I’m satisfied.”

And Saturday, he’ll be immortalized rightfully next to the best.

Denial of responsibility! TechiLive.in is an automatic aggregator around the global media. All the content are available free on Internet. We have just arranged it in one platform for educational purpose only. In each content, the hyperlink to the primary source is specified. All trademarks belong to their rightful owners, all materials to their authors. If you are the owner of the content and do not want us to publish your materials on our website, please contact us by email – [email protected]. The content will be deleted within 24 hours.
Loading...
careerCommentaryFameHallheelnews updatePaulPierce
Share

Holding my son tight, I must tell him the biggest lie of all