Notice: amp_is_available was called incorrectly. `amp_is_available()` (or `amp_is_request()`, formerly `is_amp_endpoint()`) was called too early and so it will not work properly. WordPress is currently doing the `pre_get_posts` hook. Calling this function before the `wp` action means it will not have access to `WP_Query` and the queried object to determine if it is an AMP response, thus neither the `amp_skip_post()` filter nor the AMP enabled toggle will be considered. It appears the theme with slug `publisher` is responsible; please contact the author. Please see Debugging in WordPress for more information. (This message was added in version 2.0.0.) in /home/runcloud/webapps/techilive/wp-includes/functions.php on line 5313
 Common admission for varsities in limbo - TechiLive.in 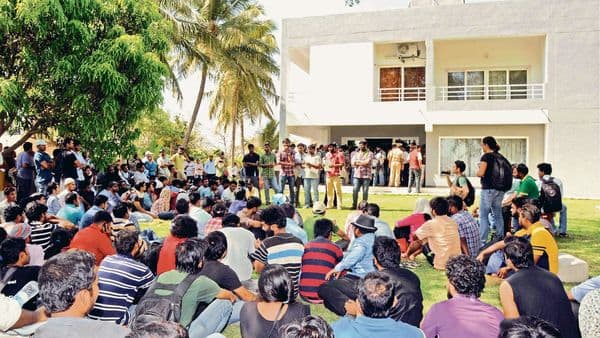 Common admission for varsities in limbo

A centralized common admission process proposed for all central universities is in limbo as uncertainty shrouds its implementation this year due to the pandemic, postponement of school board exams and a delay by the government on deciding on the issue.

A government panel of vice-chancellors had submitted its report in April, supporting a common entrance exam for undergraduate courses, and a similar process for postgraduate courses at the more than 40 central universities. However, the education ministry is yet to take a decision.

“In the absence of clarity, we are not sure how to go ahead this year. We have not heard anything from the authorities in New Delhi on the common admission process. Yes, school boards are yet to conduct the Class 12 board exams, but we need clarity on post-graduate education also. It takes a few months for the admission process and without a clear direction, that arrangement preparedness is not happening,” said a senior administrator of a central university, who declined to be named.

“The panel had submitted its recommendations in the first week of April to the Union education ministry. The pandemic has created a massive challenge for everyone, including the universities. The common admission test will depend on what the government decides. I believe they are reviewing the recommendations and the current situation,” said R.P. Tiwari, vice-chancellor of Central University of Punjab.

A government official, who spoke on condition of anonymity, said the common admission system is facing two challenges this year—one, the pandemic has made it impossible to hold physical exams, and even for online exams, candidates need to go to physical centres. Second, the delay in school boards and the possibility of declaring school board results via schools’ internal assessments make it more subjective.

“When things were looking up for the education sector, the second wave derailed everything. We understand the situation and the clarity required at the university level. The common admission proposal is still being reviewed,” the official said.

Phone calls and a text message seeking clarity from the National Testing Agency (NTA) chairman, who is also the additional secretary in charge of central varsities at the education ministry, remained unanswered.

As per the proposal, central universities were to admit students by giving 50% weightage to the performance in school board exams, and the rest in a national entrance to be conducted by the NTA. For ironing out the qualitative issues related to different school boards, the NTA was supposed to rationalize the board marks of all the state school boards, the government panel had recommended. To broad base the testing outcome, it has suggested that the national entrance will test domain knowledge as well as common aptitude, verbal ability and quantitative reasoning.

Denial of responsibility! TechiLive.in is an automatic aggregator around the global media. All the content are available free on Internet. We have just arranged it in one platform for educational purpose only. In each content, the hyperlink to the primary source is specified. All trademarks belong to their rightful owners, all materials to their authors. If you are the owner of the content and do not want us to publish your materials on our website, please contact us by email – admin@techilive.in. The content will be deleted within 24 hours.
Admissioncentral universitiescommonCommon Entrance TesteducationEducation newsEducation updatelimbo
0
Share

Gauahar Khan says she has been on ‘roller coaster ride of emotions’ lately: ‘You have to allow yourself to be okay’