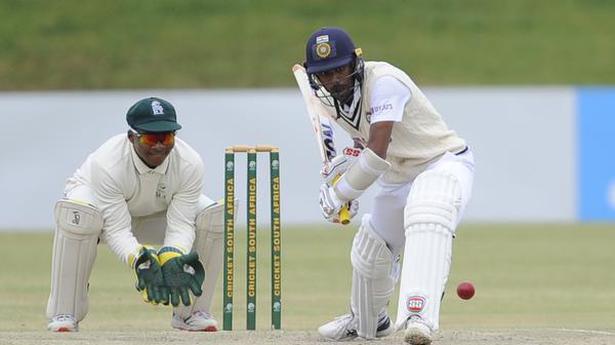 The new COVID-19 variant, which threatens to wreak havoc in South Africa, has led to considerable concerns about India’s tour of the Rainbow Nation next month with BCCI sources saying that any decision on the matter will be based on the government’s advice.

The ongoing India A tour of South Africa, featuring three unofficial Tests in Bloemfontein, could also be called off midway given the uncertain situation which has prompted several visiting sportspersons to seek a way out of the country.

The first game ended in a draw due to inclement weather on Friday and the second match starts on November 29. The team is currently in a bio-bubble and the matches are being played without spectators.

“Let’s wait and watch, we will go by government’s advisory. It is an evolving situation,” a top BCCI source told PTI on Friday.

The Ministry of External Affairs, when asked about the tour and the rise of the new variant, on Friday said, “…this is an issue more for our health authorities and civil aviation authorities. It is a developing story.” The cases are on the rise in the northern part of the country and at least two venues for the Test series — Johannesburg and Pretoria (near Centurion) — could become vulnerable to the spread of the new variant.

Also Read: Explained | What is the new coronavirus variant in South Africa?

“Look, till we get a detailed picture of the ground situation from Cricket South Africa (CSA), we will not be able to tell our next step. As per the current plan, the Indian team is supposed to leave either on December 8 or 9 just after the New Zealand series gets over in Mumbai,” the source said.

As of now, the tour is on but it is understood that the BCCI, in the next few days, will be talking to Cricket South Africa on the detection of the new variant — B.1.1.529 — which has set alarm bells ringing across the globe.

Scientists believe that the high number of spike mutations could make the new variant more resistant to vaccines, make it more transmissible and cause an increase in the severity of COVID-19 symptoms.

On Friday, it was reported that the Netherlands have withdrawn from their ongoing tour of South Africa while the first ODI between the two sides was being played in Centurion, the venue for the other two matches as well.

Cricket South Africa said a decision would be made only in the next two days as flight options for the travellers have been affected by the travel bans that have come into the effect due to the new variant.

“A decision on the continuation of the series will follow in the next 24 to 48 hours, while all flight options are being considered,” stated Cricket South Africa as speculation swirled.

“Both boards can confirm that following updated information, it is highly unlikely that the visiting team will be able to fly out of South Africa over the weekend,” it added.

The BCCI official indicated that even though players will be sent on a charter flight from Mumbai to Johannesburg, there is a possibility of putting them through three-four days of hard quarantine upon reaching given the changed circumstances, which the Board hoped won’t deteriorate further.

“Initially, there was no provision for hard quarantine but obviously the players will remain in a bio-bubble. Now with cases rising in South Africa and European Union also cancelling flights temporarily, we need to factor in these aspects,” a senior BCCI source said.

PTI also got in touch with a member of the administrative staff who is currently in Bloemfontein with the India A team.

“We didn’t undergo any hard quarantine on arrival over here since we came by charter flight and are staying in a bio-bubble. After the outbreak, a medical team from Cricket South Africa had a meeting with our representatives over here.

“We were told that there is nothing to worry since the spike in cases is far away from Bloemfontein where we would be playing our next match too,” the official said over phone.

“We were told specifically that Bloemfontein is unaffected by the spike in COVID-19 cases and also it’s happening in the northern part of the country,” he added.

He also informed that as on Friday, the A team hasn’t received any instruction from the BCCI.

“As of now, we haven’t been intimated by the BCCI about aborting the tour midway. We will do as we are told. Right now players are going for their gym session,” he said.

“We have no complaints about the bio bubble as both teams are staying in same hotel, even catering staff and ground-staff are in bubble.

“Yesterday when got some news about new variant we immediately contacted and sought an emergency meeting with CSA medical team…We can only depend on the updates and advisory of CSA.”

Denial of responsibility! TechiLive.in is an automatic aggregator around the global media. All the content are available free on Internet. We have just arranged it in one platform for educational purpose only. In each content, the hyperlink to the primary source is specified. All trademarks belong to their rightful owners, all materials to their authors. If you are the owner of the content and do not want us to publish your materials on our website, please contact us by email – [email protected]. The content will be deleted within 24 hours.
AfricaconcernscoronavirusCovid-19 new variantCovid-19 south africa variantCovid19cricket matchIndia tour of South Africa
Share