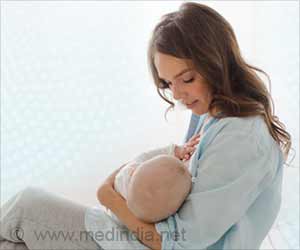 The study, titled “Comparison of human milk antibody induction, persistence, and neutralizing capacity in response to SARS-CoV-2 infection versus mRNA vaccination” was funded by The National Institute of Allergy and Infectious Diseases (NIAID) with in-kind support from Medela LLC.

Samples were collected from 77 mothers – 47 in the infected group, 30 in the vaccine group – to determine the level of antibodies in breast milk over time.

Both antibodies provided neutralization against SARS-CoV-2, the first time such evidence has been discovered for both IgA and IgG antibodies, according to study co-author Bridget Young, Ph.D., assistant professor in the Division of Pediatric Allergy and Immunology at URMC.

“It’s one thing to measure antibody concentrations, but it’s another to say that antibodies are functional and can neutralize the SARS-CoV-2 virus,” said Young, “One of the exciting findings in this work is that breast milk from both mothers with COVID-19 infection, and from mothers receiving mRNA vaccination contained these active antibodies that were able to neutralize the virus.”

Previous studies from URMC had shown evidence of antibodies in breast milk from COVID positive mothers. This follow-up study represents the longest time period that disease-acquired antibodies have been examined post-illness, and the results showed that these antibodies exist for three months after infection.

For vaccinated mothers, the study found evidence of a mild-to-modest decline in antibodies – on average – three months post-vaccination.

“The trend in breast milk antibodies aligns with what we see in vaccination sera,” said study co-author Kirsi Jarvinen-Seppo, PhD, M.D., Chief of Pediatric Allergy and Immunology at URMC, “after a few months, the antibodies trend downward, but the levels are still significantly above what they were pre-vaccine.”

Both Young and Jarvinen-Seppo emphasize, however, that while the antibody response exists, it’s not yet shown whether these breast milk antibodies can provide protection against COVID for nursing children.

“The study does not imply that children would be protected from illness,” said Jarvinen-Seppo, “and breast milk antibodies may not be a substitute for vaccination for infants and children, once approved.”

For the next phase of the study, URMC researchers are looking to find evidence whether both vaccination and illness-acquired immunity provide antibodies against other seasonal coronaviruses.

Denial of responsibility! TechiLive.in is an automatic aggregator around the global media. All the content are available free on Internet. We have just arranged it in one platform for educational purpose only. In each content, the hyperlink to the primary source is specified. All trademarks belong to their rightful owners, all materials to their authors. If you are the owner of the content and do not want us to publish your materials on our website, please contact us by email – [email protected]. The content will be deleted within 24 hours.
antibodiesAntibodies in human milkBreastCovidCOVID Antibodies In Breast MilkHealth newsHealth updateMilk
Share