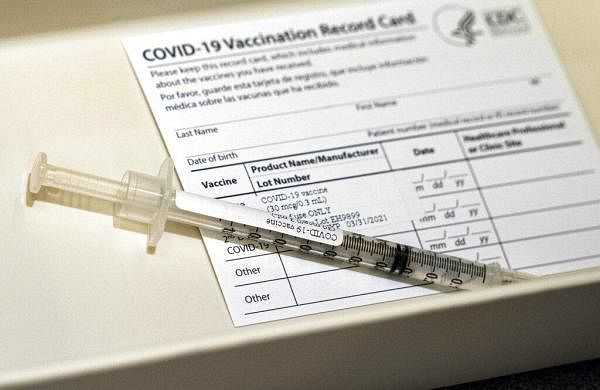 LONDON: People with cancer have an appropriate, protective immune response to COVID-19 vaccines without experiencing any more side-effects than the general population, researchers said on Tuesday.

Evidence presented virtually to a global audience at the annual congress of the European Society for Medical Oncology (ESMO), suggests that a third “booster” shot could further increase the level of protection among this patient population.

Patients with cancer were excluded from the clinical trials conducted to develop the COVID-19 vaccines and support their authorisation for use.

The questions of whether the vaccines are safe in this vulnerable population and whether they provide adequate protection against severe forms of COVID-19 to individuals whose immune system may be weakened by various anticancer medicines had until now been left open.

The first study explored the potential impact of chemotherapy and immunotherapy on the protection afforded by vaccination against COVID-19.

The researchers enrolled 791 patients from multiple hospitals in the Netherlands in four distinct study groups to measure their responses to Moderna’s two-dose vaccine.

Antonio Passaro, lung cancer expert at the European Institute of Oncology in Italy, who was not involved in the study, said these results compare favourably with the antibody responses seen in almost all (99.6 per cent ) of the group of individuals without cancer.

“The high rates of efficacy of the vaccine observed across the trial population, regardless of the type of anticancer treatment, constitute a strong and reassuring message for patients and their doctors,” Passaro said in a statement.

He highlighted the importance of ensuring complete, two-dose vaccination for patients with cancer to develop enough protective antibodies against the virus.

The trial data also showed that only about one in three of those receiving chemotherapy on its own or in combination with immunotherapy had achieved a sufficient response after their first shot — half as many as in the group of individuals without cancer.

This observation was replicated in a second study on the effects of Pfizer vaccine among 232 patients with cancer and 261 control subjects in Israel.

While less than a third of individuals with cancer developed antibodies after receiving the first dose, compared to 84 per cent in the control group, this proportion increased to 86 per cent following administration of the second dose.

Further demonstrating the efficacy of the vaccine, only two cases of COVID-19 were reported during the study period, both of which occurred in patients who had not yet received their second shot.

Data from another study was presented at the conference that was conducted on 585 patients with cancer who received two doses of either Pfizer or AstraZeneca’s COVID-19 Vaccine in the UK.

Those who had previously contracted COVID-19 (31 per cent) had higher levels of virus-neutralising antibodies, including against variants such as Delta, for which vaccination loses some of its effectiveness.

This was separately corroborated by a fourth study which showed that the antibody response to vaccination was significantly enhanced even after the first dose among patients with cancer who had recovered from COVID-19.

“These findings lend additional support to the principle of offering the complete cycle, possibly including a third booster dose, to patients with cancer to improve their protection,” Luis Castelo-Branco, Medical Oncologist, ESMO Scientific and Medical Division, said.

According to Castelo-Branco, these and other studies presented at the conference, reported no new adverse events, and offer conclusive evidence that while being largely effective, anti-COVID vaccination is just as safe for people with cancer as it is for the general population.

Denial of responsibility! TechiLive.in is an automatic aggregator around the global media. All the content are available free on Internet. We have just arranged it in one platform for educational purpose only. In each content, the hyperlink to the primary source is specified. All trademarks belong to their rightful owners, all materials to their authors. If you are the owner of the content and do not want us to publish your materials on our website, please contact us by email – [email protected]. The content will be deleted within 24 hours.
cancerChemotherapy CovidCovidCovid vaccine cancerEffectiveEuropean Society for Medical OncologyfindImmunotherapy vaccine
Share

Uber Says It Will Post Its First Adjusted Profit