Notice: amp_is_available was called incorrectly. `amp_is_available()` (or `amp_is_request()`, formerly `is_amp_endpoint()`) was called too early and so it will not work properly. WordPress is currently doing the `pre_get_posts` hook. Calling this function before the `wp` action means it will not have access to `WP_Query` and the queried object to determine if it is an AMP response, thus neither the `amp_skip_post()` filter nor the AMP enabled toggle will be considered. It appears the theme with slug `publisher` is responsible; please contact the author. Please see Debugging in WordPress for more information. (This message was added in version 2.0.0.) in /home/runcloud/webapps/techilive/wp-includes/functions.php on line 5313
 Cross-cultural collaboration: Lucky Ali and Eliezer Botzer release their second single, ‘Amaraya’ - TechiLive.in 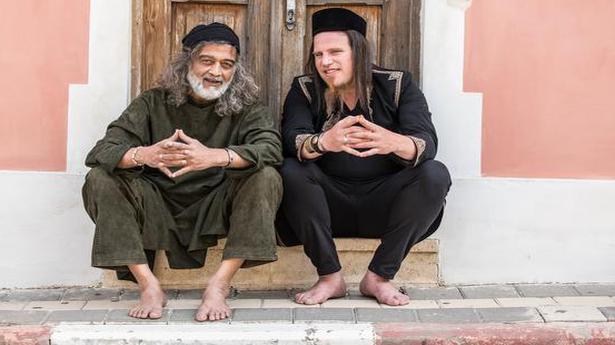 When singer-song writer Lucky Ali, a devout Muslim and proud Indian, and musician Eliezer Botzer, an Orthodox Jew and proud Israeli found each other, the music and poetry of their spirits immediately fused and ignited a new energy.

These lines scroll on the screen of the recently-released multi-lingual single ‘Amaraya’ that expounds the essence of the artists’ musical collaboration.

Lucky Ali and Botzer speak to us over a video call from Bengaluru and Tel Aviv respectively;their conversation as seamless as their music — each one giving space to the other to express, and at the right moment.

The collaboration started with the release of the first track ‘On My Way Home’ from their album Lemalla in November 2019. Coming post the pandemic lockdown, ‘Amaraya’ — meaning mirror or reflection in Arabic — according to the artistes, ‘is a song about hope, unity and connection’.

The track, released on March 31, is recorded in Urdu, Hindi, Hebrew and Arabic and shot at Lucky Ali’s farm in Bengaluru and some locales in Goa. ‘Amaraya’ is a soulful rendition that does not conform to a particular genre but regales the listeners with rhythmic beats and harmonies.

“I see this as a continuation of the journey within the song that will culminate in something that we are yet to discover. It’s a work in progress,” says Lucky Ali. He adds, “The producers had already set the idea of this rich music in place, we had to find space for ourselves, and it was a welcoming space.”

Agreeing it was “the development of a journey”, Eliezer says, “When we released ‘On My Way Home’ we didn’t realise that wherever we were, we were on our way home. But then we all got into this pandemic situation and the perception of home changed. ‘Amaraya’ came at the right time when we see humans connecting, no matter where they are. You could be isolated but could relate to every person in the world.”

Thirty-eight-year-old Eliezer visited India several times in the past and says he has deep love and connection with the country.

“When we were looking to collaborate with Indian musicians, I happened to see his (Lucky Ali) performance and heard his music and felt connected immediately. First, we got in touch with him on phone and were so amazed by his personality,” recalls Eliezer and adds, “I’m privileged and honoured to be a student to Lucky… the whole relationship is not just about sharing ideas but also opening our hearts to create harmony together.”

Emphasising on the point that it matters whom he collaborates with, Lucky Ali says, “The people I’ve worked with and whom I’m working with, I have known them for years. Musicians are friendly people among themselves.”

What’s important is the vibe that you feel besides the love and faith in your work, he adds. “I look for no other connotations. Eli and his family are very simple people. He’s a very respected musician and he’s someone who’ll never misuse that talent, he’s a responsible family man, we want to see our children’s growth along with our growth… so that’s the connection.”

The song ‘Amaraya’ has vocals by the duo’s daughters, admittedly satisfying for the proud fathers. “Apart from our daughters, different musicians from Israel were part of this project. Through the right tunes, the right relations develop all the time. This collaboration is all about different musicians and cultures but at the core of it is the simplicity of friendship. This is the beauty of this project,” says Eliezer.

The bond over a common perception of the world, music and spirituality and the Hebrew word Lemella meaning to ‘rise high’ couldn’t have been more apt for their album.

“We are in a journey that always develops and we are grateful for this collaboration and friendship. We hope to meet the whole world under normal circumstances when the pandemic is behind us,” says Eliezer as Lucky Ali nods in agreement.

Denial of responsibility! TechiLive.in is an automatic aggregator around the global media. All the content are available free on Internet. We have just arranged it in one platform for educational purpose only. In each content, the hyperlink to the primary source is specified. All trademarks belong to their rightful owners, all materials to their authors. If you are the owner of the content and do not want us to publish your materials on our website, please contact us by email – admin@techilive.in. The content will be deleted within 24 hours.
Loading...
AliAli-Eli projectAmarayaAmaraya. LemallaBotzercollaborationCrossculturalEliezer
0
Share