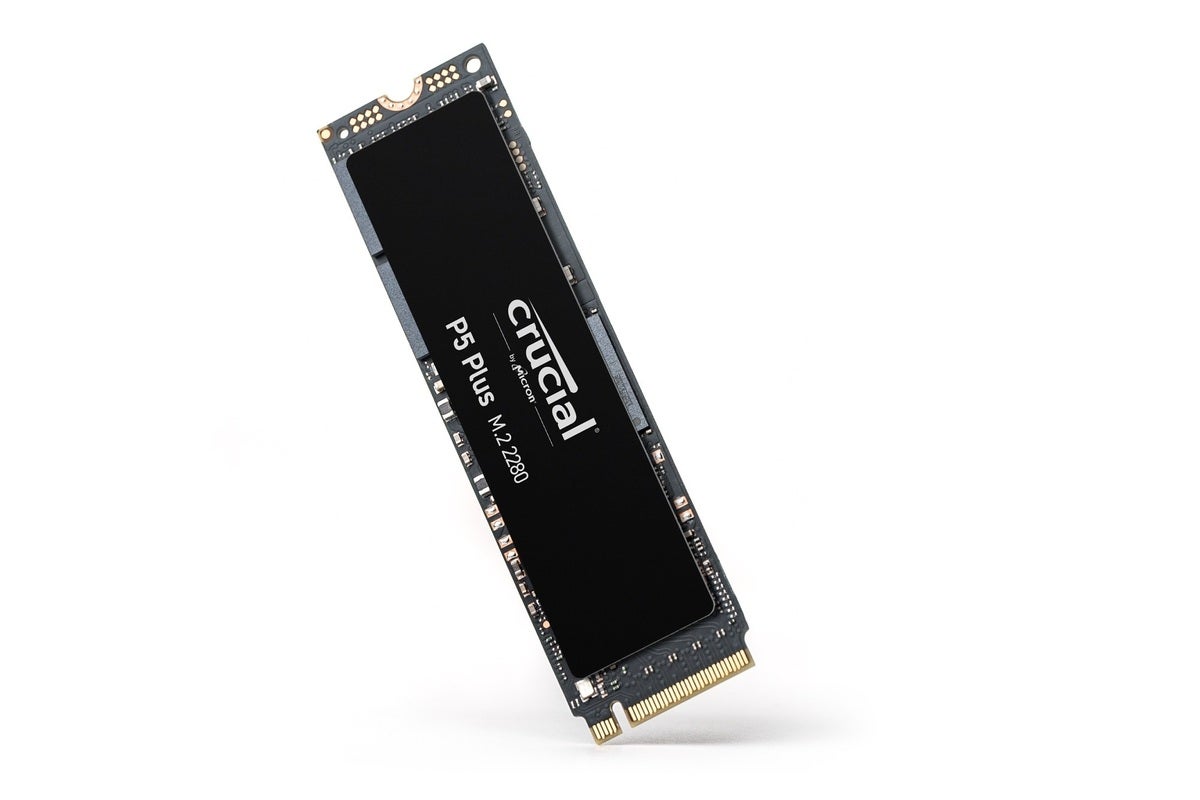 The P5 Plus is the follow-on to Crucial’s affordable and surprisingly fast P5 NVMe SSD. It’s a worthy encore, at least in terms of performance. Not only is this new version slightly faster, it offers the PCIe 4 support the older drive lacks.

Alas, that slight uptick in performance and the PCIe 4 support also come with a significant price bump, putting it in direct competition with Samsung’s excellent 980 Pro.

The Crucial P5 Plus is warrantied for five years, as well as rated for 300TBW (TeraBytes that can be Written) per 500GB of capacity. That’s in line with the drive’s price; though essentially the same as pro drives, consumer drives are expected to see less use and are priced accordingly. They carry lower ratings, which will mitigate the warranty, to discourage high-transaction use in servers and other intense endeavors. That said, most users will never write nearly as much data as even bargain drives are rated for.

I have to mention Crucial including a M.2 mounting screw in the box. Losing those little suckers has been a problem as long as I’ve been testing the type. Nice touch.

Because of the older P5’s surprisingly fast performance, the good numbers turned in by the 1TB P5 Plus that Crucial sent were hardly unexpected. In general, it outpaced its predecessor by about 5 to 10 percent. Massive 450GB writes slowed down by a third once they got about two-thirds into the operation, and peak PCIe 4 write speed wasn’t rated top-tier by synthetic benchmarks. Other than that, especially in real life transfers, it was all good.

CrystalDiskMark 6 was slightly pessimistic about the P5 Plus’s write speed over PCIe 4 compared to the other drives. However, 5GBps is still a very nice boost over PCIe 3—the non-Plus P5 topped out at 3.3GBps over that interface, as does the P5 Plus when you plug it into a PCI 3 system.

As noted, the Crucial P5 Plus’s real world sustained reads and writes (shown below) were very good. It lost to the top-ranked Seagate FireCuda 530, and aforementioned Samsung 980 Pro, but not by a large margin.

The P5 Plus lost half a star in our final rating due to a drop in write speed during our long 450GB write, which we run to show where drives run out of main cache as well as the native speed of the NAND. Main cache (not DRAM) is NAND treated as SLC (Single Level Cell). Writing a single bit is far faster than writing three as you would natively with TLC NAND. Contents of the cache are transferred to three-bits when the drive has time.

For the 1TB P5 Plus tested, cache ran out at around the 315GB mark of our 450GB write test. The 500GB capacity will likely run out sooner and turn in slower times, while the 2TB capacity will probably not run out at all and shave a hundred seconds off the times shown above. Slowdowns somewhere during this test is the general rule for second-tier or lower drives—Kingston’s KC2500 excepted. As to the meaningfulness of this test… Most normal users will rarely if ever move more than 315GB of data in one go.

All in all, the Crucial P5 Pro is a very good performer in just about every scenario the average user is likely to experience.

The PCIe 4 testing was done on an MSI MEG X570 motherboard socketing an AMD Ryzen 7 3700X 8-core CPU, using the same Kingston DRAM, cards, and software. All testing is performed on an empty, or nearly empty drive that’s TRIM’d after every set of tests. Performance will decrease as the drive fills up.

The P5 Plus is a very good NVMe SSD, but it’s not the bargain that its predecessor was. I still recommend the older drive for PCIe 3 users seeking to save money, but at the time of this writing, the more consistent-performing Samsung 980 Pro is priced lower than the P5 Plus. That makes the P5 Plus a it of a tough sell.

Denial of responsibility! TechiLive.in is an automatic aggregator around the global media. All the content are available free on Internet. We have just arranged it in one platform for educational purpose only. In each content, the hyperlink to the primary source is specified. All trademarks belong to their rightful owners, all materials to their authors. If you are the owner of the content and do not want us to publish your materials on our website, please contact us by email – [email protected]. The content will be deleted within 24 hours.
CompetitioncrucialFastgadget updatePCIereviewSSDtech news
Share

KKK in its final leg

TikTok Not YouTube Is Being Consumed the Most in US, UK: App Annie