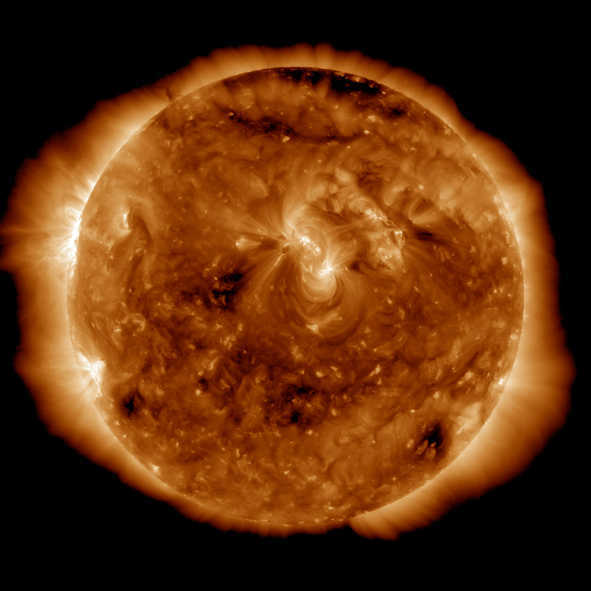 Curious Kids: why is the Sun’s atmosphere hotter than its surface?

Why is the Sun’s atmosphere hotter than its surface? — Olivia, age 9, Canberra.

The truth of the matter is — we don’t know! But we do have some ideas about where the energy that heats the Sun’s atmosphere might be coming from, and it has a lot to do with the Sun’s magnetic field. Let me explain what this means.

The temperature of the Sun

Heat is created in the very centre of the Sun, at its core, where the temperature is a blistering 27 million degrees Celsius. And just like walking away from a campfire, the temperature gets cooler further away from the core.

The temperature of the Sun’s surface is about 6,000 degrees Celsius, which means it’s much cooler than the core. Also, it continues to cool down for a short distance above the surface.

But higher above the surface, in the atmosphere, the temperature suddenly shoots up to more than a million degrees! So there must be something that’s heating the Sun’s atmosphere. But we can’t easily find out what it is.

The key is the Sun’s magnetic field

The leading idea among experts is the Sun’s magnetic field is actually bringing energy from inside the Sun up through its surface and into its atmosphere.

We can’t see magnetic fields, but we know they are there because we have objects that react to them. For example, a compass needle on Earth will always point to the North pole because it lines up with Earth’s magnetic field.

While the Sun also has a North and South pole, its magnetic field behaves differently to Earth’s and looks a lot messier. At the surface of the Sun, the magnetic field lines look like many loops rising up out of the surface into the atmosphere — and these loops are changing all the time.

If the loops touch each other they can cause sudden explosions of enormous amounts of energy that heat up the atmosphere. We also know there are waves travelling along the magnetic field lines bringing energy up. Could they be responsible for heating the atmosphere?

Is it a combination of the waves and the explosions, or something else altogether? Being able to measure the Sun’s magnetic field would really help us understand what’s going on.

Magnetic fields may be invisible, but we can still measure them because they make small changes to the light that comes from the Sun. The surface of the Sun is very bright, so it’s easy to see changes in the light coming from the surface, and measure the magnetic field there.

But the Sun’s atmosphere is so hot the light there is not visible anymore. Rather it makes X-rays, which are a type of light we can’t see! Even if we use special X-ray telescopes, the X-rays from the Sun’s atmosphere are too dim for us to figure out what the magnetic field in the atmosphere looks like.

The good news is there is a brand new satellite, NASA’s Parker Solar Probe, which is now orbiting close to the Sun (but not too close) and actually flying through the magnetic field to measure it. We should be receiving a lot of exciting new information from it over the next five years.

These magnetic field measurements will bring us closer to understanding what is making the atmosphere of the Sun, and other stars, much hotter than their surface. (The Conversation)

Loading...
Denial of responsibility! TechiLive.in is an automatic aggregator around the global media. All the content are available free on Internet. We have just arranged it in one platform for educational purpose only. In each content, the hyperlink to the primary source is specified. All trademarks belong to their rightful owners, all materials to their authors. If you are the owner of the content and do not want us to publish your materials on our website, please contact us by email – [email protected]. The content will be deleted within 24 hours.
atmospherecuriousgadget updatehotterKidsSunsSurfacetech news
Share

India vs England: Ajinkya Rahane and Cheteshwar Pujara might be under pressure and we need to back them, says Ajit Agarkar | Cricket News – Times of India