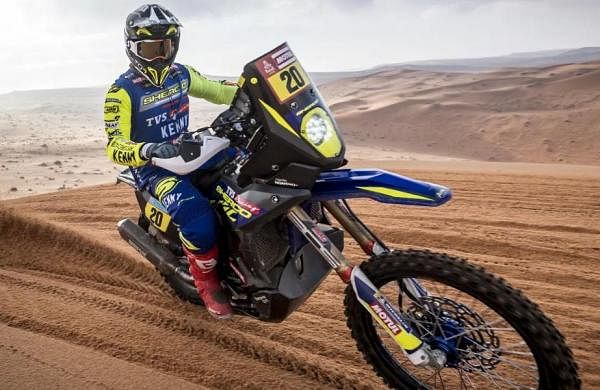 RIYADH: Lone Indian rider in this year’s Dakar Rally, Harith Noah of Sherco TVS Racing Factory survived dangerous terrain and a few crashes to be placed 28th in the overall ranking after Stage 6 in the Moto section of the world’s toughest off-road rally here.

The five-time national champion from Bengaluru, Noah fell in the first stage and finished 36th among 145 riders but went on to improve his rank to 31st after Stage 4 and 30th after Stage 5. He continued his progress admirably on Friday, despite a painful shoulder, and finished a creditable 28th in the overall ranking, clocking 21:47.07s.

The bike and quad special was halted at the first neutralisation area after 101 km on Friday. The deterioration of the tracks due to the passage of the cars and trucks in the previous stage in the reverse direction, combined with recent heavy rain meant that the route was impassable.

The classification for Stage 6 was established at the 101 km mark. Noah’s teammate Lorenzo Santolino is in overall sixth position after Stage 6 while Rui Goncalves is placed 32nd. Hero MotoSports Team Rally’s Joaquim Rodriques is placed overall 18th in the general ranking, while his South African mate Aaron Mare slipped to the 16th position.

Denial of responsibility! TechiLive.in is an automatic aggregator around the global media. All the content are available free on Internet. We have just arranged it in one platform for educational purpose only. In each content, the hyperlink to the primary source is specified. All trademarks belong to their rightful owners, all materials to their authors. If you are the owner of the content and do not want us to publish your materials on our website, please contact us by email – [email protected]. The content will be deleted within 24 hours.
28thDakarDakar rallyHarithharith noahIndiaslonenews update
Share

Christians strip down at a South Texas nudist community