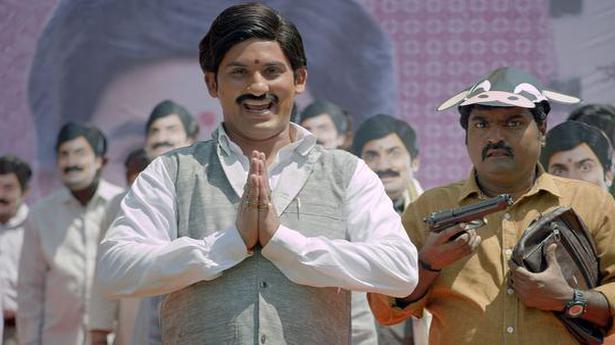 Danish Sait: Huge respect for actors who have managed to sustain positions

Basking in the further adventures of the humble politician Nograj in the web series, Danish talks about the agony and ecstacy of show business

Danish Sait, who started off as an RJ, has come a long way as an actor, writer and stand up comedian.His short videos, which started during the lockdown, on everything from India’s cricket fortunes to vaccination and New Year celebrations, in the popular Bengaluru slang (“macha, don’t say that sim-simply) made him a household name.

Danish says being in the world of entertainment is no cakewalk. “You have to constantly reinvent yourself.” Talking about the web series, Humble Politician Nograj that he is headlining, the 33-year-old actor says, the series is different from the film.

“The series is about two politicians who want to outdo each other in the race to become the chief minister.”

Creating original comedy for streaming platforms is a different ball game says Danish. “OTT has its own data that defines what works and what does not. I am too small a cog to dictate what I want to promote where. I wake up every day and try to do something new.”

French Biriyani, one the first Kannada films to have a direct OTT release, saw Danish play Azgar, an auto driver. “It was bang in the middle of the pandemic and lockdown. The film did well, but, again, with OTT one cannot say if it worked or not until you are approached for another project or film.”

There is a certain kind of cinema and certain kinds of movie stars who can bring the audience into a theatre, says Danish. “I do not think I command that sort of following. Having talent is good, but having raw star power is something else.”

Wondering if people will come out of their homes to watch your work is a terrifying prospect, says Danish. “This feeling becomes magnified in a theatrical release. It can at times be a nerve-wrecking experience. You do not know if the producer is riding in the bus with you or if you have thrown him under the bus!”

It is best for the talent to focus on the creative work and have a business team to manage the other aspects, says Danish. “This is exactly what the great actor, Puneeth Rajkumar encouraged. He would always tell me, ‘you worry about the craft and the business angle will be taken care of. He was not only a great person, but also had a brilliant business acumen. He was the first to encourage Kannada films to go on OTT during the pandemic. Working with him was a great pleasure.”

Danish says it is not making a film, but sustaining your position as an actor that is the Herculean task. “Distribution is different. It brings in a new partner in the last leg and becomes the connect between the consumer and the maker. There is no guarantee that if film is made, it will be watched by people.”

Entertainment is a business that is always evolving, says Danish likening it to a dragon that has to be fed constantly. “Sustainability is a bigger challenge because for one, inventing a wheel is tough, and reinventing yourself time and time again is tougher. It is easy to reach the peak but harder to stay there. Which is why I have a mad amount of respect for actors who have been around for a decade or two in the industry. It means they have done so many things right in their career. For me, reaching the peak itself has taken such a long time. I am not sure that I can sustain it.”

Danish praises actors such as Dhananjay for his work in Badava Rascal, and Anup and Nirup Bhadari, and Rakshit Shetty, for their courage to continuously believe in an idea right its inception.”

Danish will next be seen in 777 Charlie with Rakshit Shetty. “It is a small role. I took it up because of my immense gratitude for Rakshit. He means a lot to me.” Besides this, Danish also has a PRK film, which he cannot talk about. “It is one of the last films that the Power Star was involved in before his untimely death. This film may see a virtual release in the coming months.”

Denial of responsibility! TechiLive.in is an automatic aggregator around the global media. All the content are available free on Internet. We have just arranged it in one platform for educational purpose only. In each content, the hyperlink to the primary source is specified. All trademarks belong to their rightful owners, all materials to their authors. If you are the owner of the content and do not want us to publish your materials on our website, please contact us by email – [email protected]. The content will be deleted within 24 hours.
ActorsDanishDanish Saitentertainment newsEntertainment updatehugehumble politician nograjManaged
Share