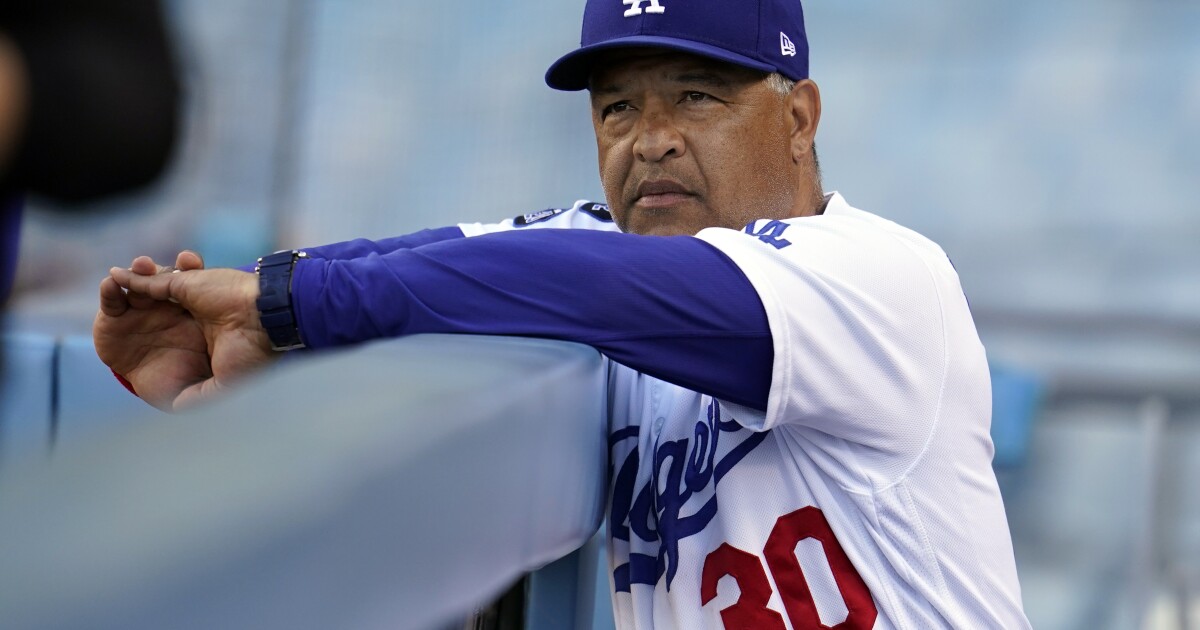 Major League Baseball, after turning a blind eye in recent years, this week informed team owners that it plans on enforcing rules to curb pitchers’ application of foreign substances on baseballs in the coming weeks. The decision is spurred by rampant use across the majors, which is viewed as a significant reason for offensive struggles this season.

Dodgers manager Dave Roberts and catcher Will Smith said Friday that the team hasn’t heard from the league on the matter.

“I guess you see it across the league where some guys are blatantly using it,” Smith said. “But as far as it goes for me, I mean, I don’t know. It doesn’t really affect me that much, I feel like, as a hitter. So, yeah, it’d be interesting to see what they do with it.”

A quick glance at Major League Baseball’s spin rate leaderboards — accessible for anyone with a computer and an internet connection — is all that’s needed to know that the Dodgers’ pitching staff spins baseballs better than any other. Proof of anyone on the Dodgers’ roster using foreign substances hasn’t surfaced, at least publicly. Does Roberts expect a drop-off in performance if MLB polices sticky stuff?

“I think that, certainly, Major League Baseball is trying to clean some things up,” Roberts said. “I’m just not as educated in how much of an enhancement it is. I really am not. So I think that, at first look, it probably will affect performance.

“But it’s across the board. And I believe that with the guys that we have on our pitching staff and the position players’ side, we will be big-time beneficiaries.”

Zoom out to pitchers who have faced at least 50 batters and the Dodgers’ bullpen enters the mix. Bauer still tops the list, but Jimmy Nelson ranks seventh and Dennis Santana is 14th. As for cutters, Bauer is first, Buehler is third and Kenley Jansen is fifth. Sliders? Nelson is third, Bauer fourth and Buehler sixth. Bauer is also ahead of the pack in average slider spin rate.

Sports Illustrated took it one step further in a report this week, calculating that the Dodgers have increased their spin rate by 7.04% from last season to this season, more than any other team. The report referred to Los Angeles as “Spin City.”

Roberts said he understood “the dig,” but defended his team. He pointed out that the Dodgers added pitchers with histories of high spin rates and lost pitchers with low rates (Pedro Báez, Dylan Floro and Adam Kolarek, who ranks last in four-seam fastball average spin rate this season).

“It was a shorter look and an easier look at it versus a deeper dive, which Major League Baseball is going to do that, which I’m in favor of. I think it’s great,” Roberts said. “And once things are implemented, then we’ll adhere to the rules. That’s the way we should all look at it.”

Jimmy Nelson, Alex Vesia and Garrett Cleavinger are among the new additions with high spin rates. But nobody stands out more than Bauer. His presence is ubiquitous atop the spin rate leaderboards this season. It wasn’t two years ago.

Bauer’s average four-seam fastball spin rate of 2,410 revolutions per minute (rpm) in 2019 ranked 15th among qualified starters. The pitch’s average spin rate, however, increased nearly 400 rpm — from 2,358 to 2,755 — in September. His fastball hovered around the same number for the 2020 season, leading the league at 2,779 rpm. He finished the 60-game campaign with a 1.73 ERA and won the National League Cy Young Award.

This season, Bauer’s four-seam average spin rate of 2,835 rpm is 235 rpm ahead of all other qualified starters.

The drastic change is amplified by Bauer’s history as a candid critic of MLB ignoring the use of foreign substances. In a tweet in 2018, Bauer implied the Houston Astros doctored baseballs to increase spin rates. Bauer that year also tweeted that he could increase his spin rate on his four-seam fastball by 400 rpm if he used pine tar.

In an essay published on the Players’ Tribune in 2020, he wrote that, after eight years of trying to improve his fastball’s spin, he determined it could only happen using foreign substances. In an episode on HBO’s “Real Sports,” he later estimated that 70% of major league pitchers “use some sort of technically illegal substance on the ball.” He said he didn’t use illegal sticky stuff because he has “morals.”

In February, Bauer rode his success in 2020 to a three-year, $102-million contract with opt-outs after the first and second seasons. He was given a $10-million signing bonus and will make a base salary of $28 million this season, making him one of the highest-paid players in the majors.

“All I know is that — I’m not trying to claim ignorance — but I haven’t seen anything,” Roberts said. “And, to be quite honest, I don’t get involved in that stuff. Trevor is a grown man who is very intelligent. But as far as that, again, once it kind of all comes out in the wash on how they’re going to handle it, I have no concern that we will all follow the protocols.”

Denial of responsibility! TechiLive.in is an automatic aggregator around the global media. All the content are available free on Internet. We have just arranged it in one platform for educational purpose only. In each content, the hyperlink to the primary source is specified. All trademarks belong to their rightful owners, all materials to their authors. If you are the owner of the content and do not want us to publish your materials on our website, please contact us by email – [email protected]. The content will be deleted within 24 hours.
baseballscrackDavedoctoredhesMLBsnews updateplan
0
Share

Ninety One: Quality shares are at their cheapest level in over a decade