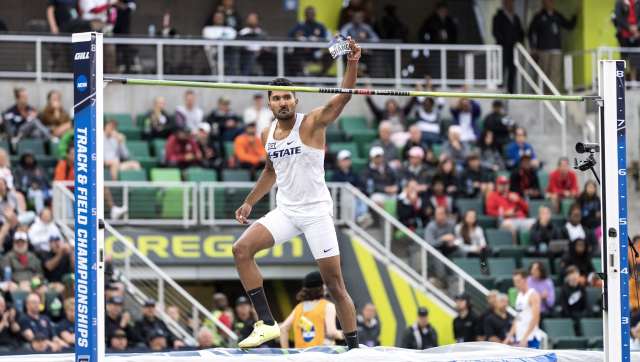 The Delhi High Court on Friday urged Indian Olympic Association (IOA) to accommodate high jumper Tejaswin Shankar and four other athletes in the 2022 Commonwealth Games squad after the Athletics Federation of India (AFI) said at the second hearing of the case on Wednesday that they have requested the Olympic body to increase the quota allotted to them.

Tejaswin, who holds the national record and breached the CWG qualification mark earlier this month, filed a petition against AFI earlier this week after he was not included in the 37-member track and field squad of the quadrennial event, slated in Birmingham from July 28.

At the first hearing on Wednesday, the Court, benched by justice Jasmeet Singh, urged AFI to include the 24-year-old athlete in its CWG squad after observing that Tejaswin was a medal contender at the event and breached the qualifying standard (of 2.25m) with a 2.27m jump at the prestigious NCAA Track and Field Championships in Oregon on June 10.

At the second hearing on Friday, however, AFI maintained they want to add Tejaswin and four other athletes, who also breached the qualifying standard or are among medal contenders, to the squad but could only do so if IOA increases their athlete quota.

Name of the other four athletes are yet to be revealed by AFI but it is likely to have long jumper Jeswin Aldrin, who breached the qualifying standard with a wind-assisted jump of 8.37m in April, but was excluded from the team after a drop in form since then.

“AFI came back with the instruction that they had a meeting on Wednesday and because they are bounded by the quota the Olympic association has given to them,” Tejaswin’s legal representative, Malak Bhatt, told Firstpost after the court proceedings. “AFI has made an active application to the Olympic association to increase their quota because they want to send not just him but four other athletes who have breached the qualifying standard and have a chance of winning a medal.”

The court, benched by justice Jasmeet Singh, also directed IOA to respond to the petition while accepting the petitioner’s application to implead the nation’s apex Olympic body at the next hearing on 4 July.

“We have moved an application to implead Indian Olympic Association at the next hearing. The court has allowed the application and issued notice to them to come back on the next date, that is the fourth of July. The court has also observed that it is hopeful of the Olympic association considering AFI’s request to increase the quota so that all the prospects with a good chance could be made part of the team, so the ball is in Indian Olympic Association’s court now to either increase the quota or select the best team,” Bhatt further said.

Denial of responsibility! TechiLive.in is an automatic aggregator around the global media. All the content are available free on Internet. We have just arranged it in one platform for educational purpose only. In each content, the hyperlink to the primary source is specified. All trademarks belong to their rightful owners, all materials to their authors. If you are the owner of the content and do not want us to publish your materials on our website, please contact us by email – [email protected]. The content will be deleted within 24 hours.
AccommodateathletesSportsCWGDelhiFirstposthopefulIncreasingIOA
Share

How ‘The Dress’ Sparked a Neuroscience Breakthrough