Notice: amp_is_available was called incorrectly. `amp_is_available()` (or `amp_is_request()`, formerly `is_amp_endpoint()`) was called too early and so it will not work properly. WordPress is currently doing the `pre_get_posts` hook. Calling this function before the `wp` action means it will not have access to `WP_Query` and the queried object to determine if it is an AMP response, thus neither the `amp_skip_post()` filter nor the AMP enabled toggle will be considered. It appears the theme with slug `publisher` is responsible; please contact the author. Please see Debugging in WordPress for more information. (This message was added in version 2.0.0.) in /home/runcloud/webapps/techilive/wp-includes/functions.php on line 5313
 Delhi Police announces ₹1 lakh reward for info on Sushil Kumar - TechiLive.in 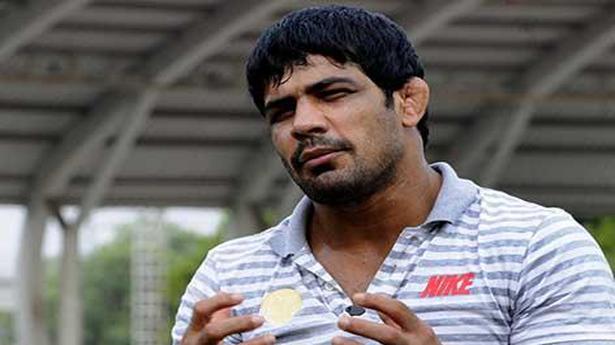 The two-time Olympic medallist is wanted in connection with a brawl that led to the death of a wrestler in New Delhi.

The Delhi Police on Monday announced a reward of ₹1 lakh for information leading to the arrest of two-time Olympic medallist Sushil Kumar in connection with the Chhatrasal Stadium brawl that led to the death of a wrestler in New Delhi.

A reward of ₹50,000 has also been announced for the arrest of his associate Ajay Kumar, who has been absconding in the case, police said.

“We have announced a reward of ₹1 lakh for information leading to the arrest of Sushil Kumar and ₹50,000 on his associate Ajay, who is also absconding in the case,” said a senior police officer.

Last week, a Delhi Court had issued non-bailable warrants against Sushil Kumar and six others in connection with the Chhatrasal Stadium brawl days after a lookout notice was issued against the two-time Olympic medalist in the same case.

The police have already recorded the statements of the victims allegedly involved in the brawl.

The clash had taken place over vacating a flat in the Model Town area, police said.

Kumar, who has been named in the FIR, is on the run, and efforts are on to trace him, a senior officer had said earlier, adding that raids were being conducted in the Delhi-NCR region and neighbouring States to nab him.

The victims alleged that Kumar was present at the spot when the clash took place, he had said.

The wrestler who died was 23 years old. He and two of his friends were brutally assaulted allegedly by other wrestlers inside the Chhatrasal Stadium in the northern part of the city last Tuesday night.

According to the police, the brawl involved Kumar, Ajay, Prince Dalal, Sonu, Sagar, Amit and others. A case was registered under various sections of the Indian Penal Code (IPC) and the Arms Act at the Model Town Police Station.

Dalal (24), a resident of Jhajjar in Haryana, was held in the case, police had said.

Denial of responsibility! TechiLive.in is an automatic aggregator around the global media. All the content are available free on Internet. We have just arranged it in one platform for educational purpose only. In each content, the hyperlink to the primary source is specified. All trademarks belong to their rightful owners, all materials to their authors. If you are the owner of the content and do not want us to publish your materials on our website, please contact us by email – admin@techilive.in. The content will be deleted within 24 hours.
Loading...
announcesDelhiinfoKumarlakhnews updatepolicereward
0
Share