Notice: amp_is_available was called incorrectly. `amp_is_available()` (or `amp_is_request()`, formerly `is_amp_endpoint()`) was called too early and so it will not work properly. WordPress is currently doing the `pre_get_posts` hook. Calling this function before the `wp` action means it will not have access to `WP_Query` and the queried object to determine if it is an AMP response, thus neither the `amp_skip_post()` filter nor the AMP enabled toggle will be considered. It appears the theme with slug `publisher` is responsible; please contact the author. Please see Debugging in WordPress for more information. (This message was added in version 2.0.0.) in /home/runcloud/webapps/techilive/wp-includes/functions.php on line 5313
 Despite woeful season, Bob Murray and Dallas Eakins will be back with Ducks - TechiLive.in 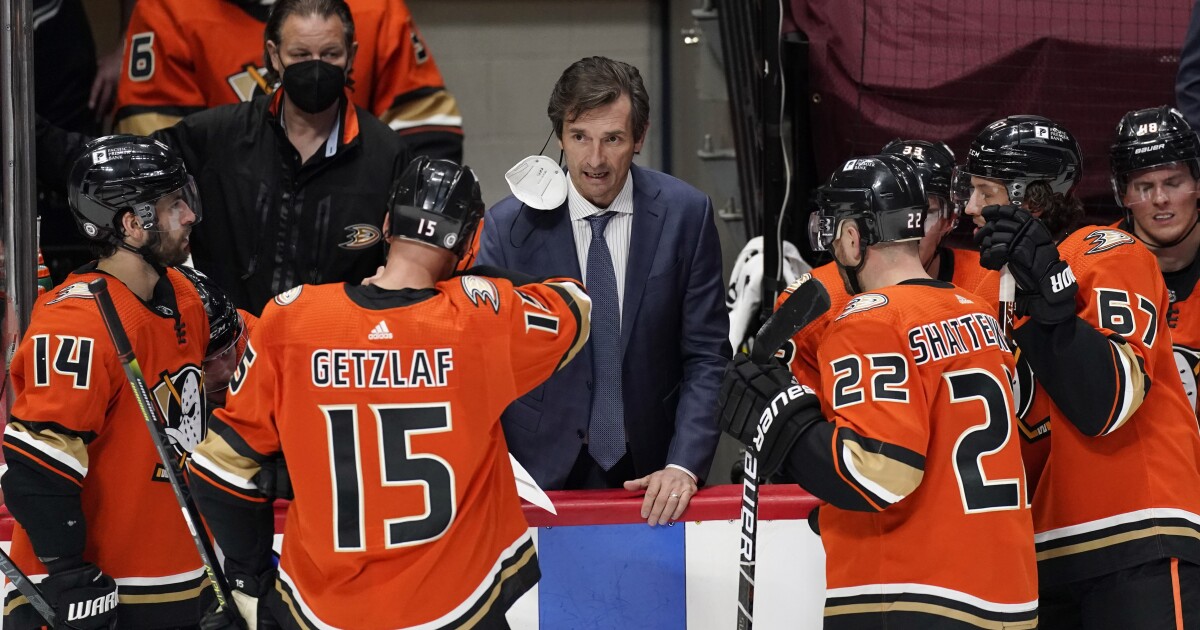 Despite woeful season, Bob Murray and Dallas Eakins will be back with Ducks

Ducks general manager Bob Murray said he will return next season after three straight playoff misses with the goal of getting players “to embrace what we’re doing here, and they’ve got to take ownership of it.”

Murray also said coach Dallas Eakins will return. However, Murray is seeking an assistant coach who can take responsibility for the power play and ease Eakins’ burden. The Ducks’ power play ranked last in the NHL last season with a success rate of 8.9%, and the team ranked 30th among 31 teams with a record of 17-30-9. Former Kings coach Darryl Sutter was an advisor to Eakins before the COVID-19 pandemic made it difficult to travel between Canada and the United States; Sutter gave up his advisory role to become head coach of the Calgary Flames in March.

Speaking during a season wrapup video conference, Murray said the Ducks’ dismal season produced the small benefit of giving the organization a chance to assess young players’ talent and potential fit in the lineup.

“A lot has been said about this being a lost season and I don’t agree with that totally,” he said. “A year ago I was talking about where younger players would be and where they would get to. We really didn’t have an idea where they’d be. At this point in time it’s much clearer to me that some of the younger guys have taken steps…

“Some of the young guys came along really well and a few didn’t. A couple of the middle-age guys have had lost years. Remodel, retool, reset — whatever you want to call it, it’s a plan. We need the core players and middle-aged players embracing what we do. We’ve got to identify which of our core guys really want to do that.”

He identified the team’s biggest need as top-six forwards — the Ducks ranked last in goals per game at 2.21 — but said they will choose the best player available in the annual draft, which is heavier at the top with promising defensemen than forwards. The Ducks have a 12.1% chance of winning the draft lottery on Wednesday and of getting the No. 1 choice. The Buffalo Sabres have the best odds at the top pick, 16.6%.

Murray blamed the Ducks’ scoring woes in part on the fact that too many players were unwilling to battle to get to tough areas on the ice to draw penalties or get prime scoring chances. He accepted blame for not recognizing that sooner. “We got older and maybe I waited one year too long to start this whatever ‘re’ word you want to use. We got older and guys got less willing to go to those places,” he said. “I don’t quite have the answers.”

Murray said he discussed his plans with owners Henry and Susan Samueli and executive chairman Michael Schulman and was pleased with their reaction. “They want it to be quicker, too. Everybody wants it. Nobody likes losing,” Murray said. He added that he was given a budget that’s “more than fair” for next season.

The Ducks have already made changes on the executive side, adding former Kings salary cap guru Jeff Solomon as vice president of hockey operations and assistant general manager following the retirement of David McNab as senior vice president of hockey operations. “Jeff brings us a whole different element of things….[and] brings an analytic component to our organization that really needs to be upgraded and moved forward. I just haven’t pushed hard enough to move it forward but this was a good time for us to do that. We got lucky. We got a break finally.”

Denial of responsibility! TechiLive.in is an automatic aggregator around the global media. All the content are available free on Internet. We have just arranged it in one platform for educational purpose only. In each content, the hyperlink to the primary source is specified. All trademarks belong to their rightful owners, all materials to their authors. If you are the owner of the content and do not want us to publish your materials on our website, please contact us by email – admin@techilive.in. The content will be deleted within 24 hours.
BobDallasducksEakinsMurraynews updateSeasonsports news
0
Share