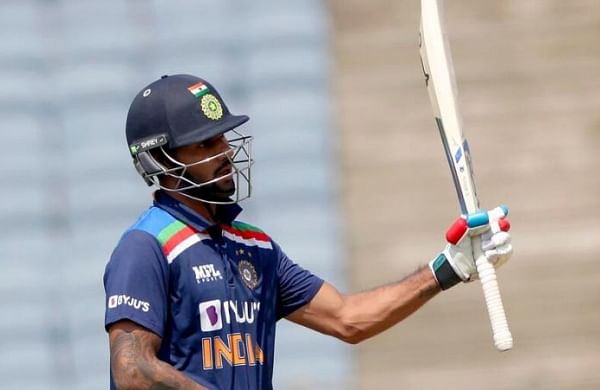 DUBAI: India opener Shikhar Dhawan jumped two places to 16th after his unbeaten half-century in the first match against Sri Lanka while Virat Kohli remained at the second spot in the latest ICC ODI rankings issued on Wednesday.

Dhawan’s unbeaten 86 in the first game of the ongoing three-ODI series in Colombo helped him accumulate 712 rating points and gain two slots, while Kohli has 848 points.

Another senior India batsman Rohit Sharma is at third position with 817 points in the list headed by Pakistan’s Babar Azam (873).

The rankings took into account the three-match series between Zimbabwe and Bangladesh, the third Ireland versus South Africa match and the first two ODIs between Sri Lanka and India.

Among bowlers, India’s Yuzvendra Chahal (up four places to 20th), Sri Lanka’s Wanindu Hasaranga (up 22 places to 36th), South Africa’s Tabraiz Shamsi (up eight places to 39th), Ireland’s Simi Singh (up six places to 51st) and Zimbabwe’s Blessing Muzarabani (up 23 places to 70th) were among the others to make headway.

In the ICC T20 rankings, Pakistan opener Mohammad Rizwan and England middle-order batsman Liam Livingstone made huge progress after finishing as the leading run-scorers for their teams in the three-match series won 2-1 by England.

Wicketkeeper-batsman Rizwan has attained a career-best seventh position after aggregating 176 runs in the series including an unbeaten 76 in the final match in Manchester, performances that helped him gain four places.

The 29-year-old had reached the top 10 for the first time in his career after a Player of the Series effort against Zimbabwe in April this year and has reaped benefits of his continued good effort.

Livingstone has galloped 144 places to reach the 27th position after playing just eight T20Is since his debut against South Africa four years ago.

The 27-year-old’s aggregate of 147 runs against Pakistan included his maiden international century, a valiant 43-ball 103 in the first match.

Denial of responsibility! TechiLive.in is an automatic aggregator around the global media. All the content are available free on Internet. We have just arranged it in one platform for educational purpose only. In each content, the hyperlink to the primary source is specified. All trademarks belong to their rightful owners, all materials to their authors. If you are the owner of the content and do not want us to publish your materials on our website, please contact us by email – [email protected]. The content will be deleted within 24 hours.
Loading...
16thDhawanICCICC mens ODI rankingsICC mens T20I rankingsICC ODI rankingsICC T20I rankingsInternational cricket council
0
Share