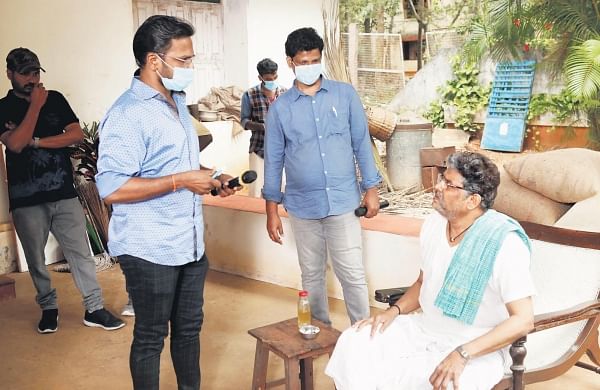 ‘Directing Kamal sir has helped me become a better actor’

Twenty two years after he produced the Kamal Haasan-starrer Thenali, KS Ravikumar returns to production once again with Koogle Kuttappa, directed by his long-time associates, Sabari and Saravanan. Ravikumar cites two reasons for why he has returned to production with this film: “I encourage my assistants to approach other producers to fund their projects. Sabari and Saravanan approached me not to produce this film but to play the lead, and another producer was set to bankroll the film.

However, there were differences with that producer, and when they couldn’t find another one, they were feeling quite sad. Enakkum kashtama irunthuchu… That’s when I told them I’d produce it,” he shares. His second reason is the strength of the script. “The film has a fresh screenplay and this idea of exploring the bond between a lonely, old man and a robot sounded different. I liked the character… And the Malayalam film, Android Kunjappan, on which this one is based, was a success in Kerala.”

After Hostel (Adi Kapyare Kootamani), Payanigal Gavanikavum (Vikruthi) and Visithiran (Joseph), Koogle Kuttappa (Android Kunjappan Ver 5.25) is the fourth Tamil remake of a Malayalam film to hit screens over the past two weeks. KS Ravikumar believes that remakes will always have an audience, even if the original film is available on streaming platforms.

“Tamil audiences who must have seen the Malayalam film must be rather small. Even if ten per cent might have seen, we have the remaining 90 per cent to cater to,” KS Ravikumar shares. “Also, even those who watched Android Kunjappan might be curious to see how this remake compares to the original. We haven’t opted for a frame-by-frame remake. For instance, Saiju Kurup’s character in the original is not prominent, whereas we have expanded that character, played here by Yogi Babu.”

For Tharshan Thiyagarajah and Losliya Mariyanesan, who are in the early stages of their respective careers, Koogle Kuttappa is a “big deal”. Tharshan, who plays KS Ravikumar’s son in the film, has appeared in minor roles in a few films but this is his first major role after Bigg Boss fame. Losliya appeared in last year’s critically panned Friendship and has been looking for a break too. Tharshan calls sharing screen space with KSR a “dream come true” and shares that he was rather nervous. “I was scared on the first day of the shoot. I didn’t want to make the filmmakers wonder why they cast me in the film! Multiple rehearsals helped, and after the first scene, sir appreciated me and put an end to my anxiety.” KS Ravikumar quickly adds, “Bayam pochu.”

For Losliya, Koogle Kuttappa was a rewarding learning experience. “I learned many things from this film, and Ravikumar sir. Sir, for instance, comes to the set as the character. I, on the other hand, memorised lines from the script and realised that it’s not necessary to learn each word in the script, as long as you understand the character and script. This was a major learning for me,” she shares, adding that she can see her get better with each film. “I am doing a film titled Annapoorni, which has scope for performance, and I’m applying what I learned from my Koogle Kuttappa experience on those sets. Enakke enna paaku pothu konjam improvements theriyudhu.”

Expanding on his approach to acting, KS Ravikumar shares that he didn’t try to emulate Suraj Venjaramoodu’s performance in the original, and neither did he parse the Malayalam film scene by scene. After the scripting stage where he offered small suggestions, the original character was no longer in his mind once shooting began. Ravikumar gave it his own touches, he says. For instance, Suraj Venjaramoodu’s medical issue in his right hand has been incorporated into the film as the character’s mannerism. Also, in Koogle Kuttappa, the lead has a limp. “My father had an issue in his leg during his last days. So, I tried to adapt that body language.” There’s one more personal connection: “My character is named Subramani, which was my father’s name. I’m not sure if the directors intended to base it on my father or whether it was a coincidence.”

So involved in the film was Ravikumar that he would limp towards his position on the sets, even when the cameras were not rolling. He shares that he picked up such cues while working with Kamal Haasan. “There’s a lot we can learn from Kamal sir. When Kamal sir plays an old lady or a tall man, or a foreigner or Balram Naidu, his entire body language changes and he becomes that character off-camera as well. Antha maari artists-a direct panni, katthukula na eppidi?”

KS Ravikumar doesn’t watch his films in the theatre
“To date, I haven’t seen my films in theatres, not even Padayappa. I once went to a drive-in cinema in ECR and saw Cheran Pandian being screened. I already knew how the audience would react. In the early 2000s, my assistants would record the sound of the audience’s reaction in the theatre and later, play that to me. I remember when Villain had released in 2002, and my assistants recorded videos of audience reaction outside the theatre… Many of them were busy showing a thumbs down to Bhagavathi, instead of reacting to Villain,” he says, laughing.

…says actor-filmmaker KS Ravikumar, who, along with Losliya Mariyanesan and Tharshan Thiyagarajah, discusses Koogle Kuttappa, in which he plays the lead character

Denial of responsibility! TechiLive.in is an automatic aggregator around the global media. All the content are available free on Internet. We have just arranged it in one platform for educational purpose only. In each content, the hyperlink to the primary source is specified. All trademarks belong to their rightful owners, all materials to their authors. If you are the owner of the content and do not want us to publish your materials on our website, please contact us by email – [email protected]. The content will be deleted within 24 hours.
ActorbecomeaDirectingentertainment newsEntertainment updatehelpedKamalnews update
Share

Mysterious Cases of Diseases in Children Who Were Infected…

When Gauri Khan revealed which of Shah Rukh Khan’s…