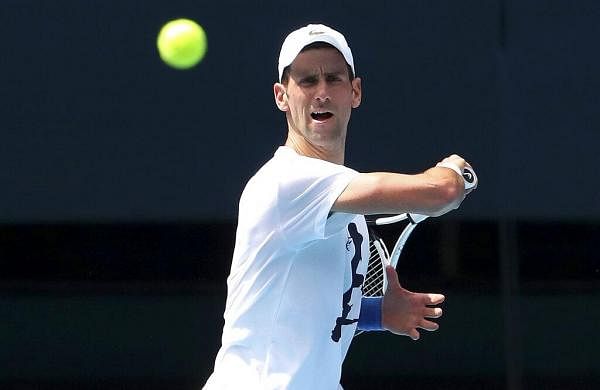 MELBOURNE: Novak Djokovic has acknowledged that his Australian travel declaration form contained incorrect information, as the government nears a decision on whether to deport the Serbian tennis star, who is not vaccinated against COVID-19, on public interest grounds.

The men’s tennis No. 1 had his visa cancelled on arrival in Melbourne last week when his vaccination exemption was questioned, but he won a legal battle on procedural grounds that allowed him to stay in the country. He still faces the prospect of deportation — a decision that is entirely at the discretion of Australia’s Immigration Minister Alex Hawke if deemed to be in the public interest for health and safety reasons.

Hawke has been considering the question since a judge reinstated Djokovic’s visa on Monday.

“Most of us thought because Mr Djokovic hadn’t been vaxxed twice that he would be asked to leave,” Joyce told Nine Network television on Thursday. “Well, that was our view, but it wasn’t the court’s view.”

“The vast majority of Australians … didn’t like the idea that another individual, whether they’re a tennis player or … the king of Spain or the Queen of England, can come up here and have a different set of rules to what everybody else has to deal with,” Joyce added.

The debate over Djokovic’s presence in Australia rages against a backdrop of surging COVID-19 infections across the nation.

Victoria state, which hosts the Australian Open, on Thursday eased seven-day isolation rules for close contacts of those infected in sectors including education and transport to curb the number of employees staying away from work.

Ticket sales to the tennis tournament have been limited to reduce the risk of transmission.

In a statement posted to his social media accounts on Wednesday, the tennis star blamed “human error” by his support team for failing to declare that he had travelled in the two-week period before entering Australia.

Giving false information on the form could be grounds for deportation, the latest twist in a saga over whether the athlete should be allowed to stay in Australia despite not being vaccinated. The initial news that Djokovic was granted an exemption to strict vaccination rules to enter the country provoked an outcry and the ensuing dispute has since overshadowed the lead-up to the Australian Open.

Djokovic acknowledged the lapses when he sought to clarify what he called “continuing misinformation” about his movements after he became infected last month — though he did not spell out what inaccuracies he was referring to.

The statement was posted while Djokovic was in Rod Laver Arena holding a practice session, his third on the tournament’s main court since being released from four nights in immigration detention.

Djokovic remains in limbo before the year’s first tennis major starts Monday. The stakes are particularly high since he is seeking a men’s record 21st Grand Slam singles title.

Deportation could result in sanctions ranging up to a three-year ban from entering Australia, a daunting prospect for a player who has won almost half of his 20 Grand Slam singles titles here.

Court documents detailing Djokovic’s positive test sparked speculation over the star player’s attendance at events in his native Serbia last month. Further questions also were raised about errors on his immigration form that could potentially result in the cancellation of his visa yet again.

On the form, Djokovic said he had not travelled in the 14 days before his flight to Australia, despite being seen in Spain and Serbia in that period.

In his statement, Djokovic described recent commentary as “hurtful” and said he wanted to address it in the interest of “alleviating broader concern in the community about my presence in Australia.”

The 34-year-old Serb said he’d taken rapid tests that were negative and he was asymptomatic before he received his positive result from a PCR test he undertook out of an “abundance of caution” after attending a basketball game in Belgrade on Dec. 14.

He received the result late Dec. 17, he said and scrapped all his commitments except a long-standing interview with L’Equipe newspaper the following day.

“I felt obliged to go ahead … but did ensure I socially distanced and wore a mask except when my photograph was being taken,” Djokovic said.

The L’Equipe reporter who interviewed the athlete wrote in the newspaper that he and a photographer were also masked during the session — and kept their distance except for a brief moment as Djokovic said goodbye. The reporter said he tested negative for COVID-19 on Monday, and did not mention the photographer’s status.

“While I went home after the interview to isolate for the required period, on reflection, this was an error of judgment,” Djokovic said.

At the time, Serbia required those who were infected with COVID-19 to isolate for at least 14 days. But Djokovic was seen a little over a week after his positive test on the streets of Belgrade, though he said he had tested negative in between.

Meanwhile, Djokovic addressed the Australian travel declaration by saying it was submitted by his support team and “my agent sincerely apologizes for the administrative mistake in ticking the incorrect box.”

“This was a human error and certainly not deliberate,” he wrote. “My team has provided additional information to the Australian Government to clarify this matter.”

The decision could take a while, but there is time pressure since the draw to determine brackets for the Australian Open is set to take place Thursday.

Hawke’s office issued a statement on Wednesday saying Djokovic’s legal team had filed further documents and added: “Naturally, this will affect the timeframe for a decision.”

At issue is whether he has a valid exemption to strict rules requiring vaccination to enter Australia since he recently recovered from COVID-19.

His exemption to compete was approved by the Victoria state government and Tennis Australia, the tournament organizer. That apparently allowed him to receive a visa to travel.

But the Australian Border Force rejected the exemption and cancelled his visa upon arrival before a federal judge overturned that decision. Lawyers for the government have said an infection was only grounds for an exemption in cases in which the coronavirus caused severe illness — though it’s not clear why he was issued a visa if that’s the case.

The initial decision to let him compete sparked complaints that Djokovic was being given special treatment, and the subsequent cancellation of his visa raised allegations that he was being targeted once the issue became political. The saga is playing out against the backdrop of growing concern in Australia over surging COVID-19 cases and the government’s strategy to contain them.

If Djokovic’s visa is cancelled, his lawyers could go back to court to apply for an injunction that would prevent him from being forced to leave the country.

Sydney-based immigration lawyer Simon Jeans said if Djokovic’s visa were cancelled, he would likely be held in immigration detention. Djokovic could apply for a bridging visa to compete in the tournament pending the appeal. The immigration department would have two business days to decide on that application. If Djokovic were refused such a visa, an appeal would typically take weeks, Jeans said.

Denial of responsibility! TechiLive.in is an automatic aggregator around the global media. All the content are available free on Internet. We have just arranged it in one platform for educational purpose only. In each content, the hyperlink to the primary source is specified. All trademarks belong to their rightful owners, all materials to their authors. If you are the owner of the content and do not want us to publish your materials on our website, please contact us by email – [email protected]. The content will be deleted within 24 hours.
AdmitsAlex HawkeAustralian immigrationCovid-19DeclarationdjokovicDjokovic visaincorrect
Share

Harris out, Usman Khawaja to open for Australia in 5th Ashes test