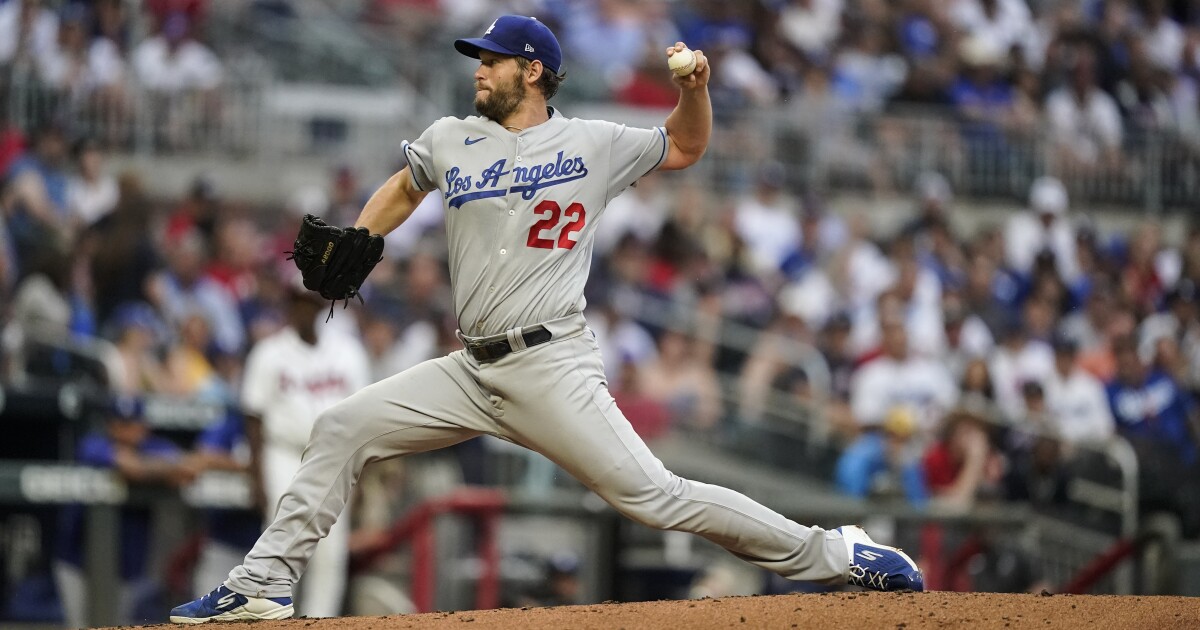 A downpour spattered Truist Park on Saturday evening, forcing the grounds crew to roll out the detested white tarp less than two hours before first pitch of the Dodgers’ 6-4 loss to the Atlanta Braves. Thunder rolled. Lightning struck. But the elements didn’t impede Corey Seager. He emerged to play catch in shallow left field anyway.

“I don’t want to get behind a day, you know?” Seager said.

The Dodgers shortstop is still in recovery mode after fracturing the fifth metacarpal, the bone at the base of his pinky finger, in his right hand when he was hit by a pitch three weeks ago. He started playing catch and gripping exercises recently, but he hasn’t been cleared to take two-handed swings.

Batting practice is the final step before going on a rehabilitation assignment. He said doesn’t know when he’ll reach it. He said he could ultimately miss eight weeks before returning to the Dodgers. He said he hasn’t set a target date. Patience is key.

“I try to not do that, to be honest with you, because you’re just going to get mad one way or the other,” Seager said. “So I’ve just tried to be a good boy so far. Just let them tell me when I can do things.”

Seager followed the team’s direction by staying back in Los Angeles to rehab the last time the Dodgers were on the road. But he wanted to join the team for this trip, to just be around the team.

On Saturday, he watched, after the rain delayed the start of the game 20 minutes, Clayton Kershaw give up five two-out runs in the third inning on five hits and a costly walk to Ronald Acuña Jr. Ozzie Albies and Dansby Swanson both contributed two-run doubles as Kershaw yielded at least five runs in consecutive starts for the first time since June 2011.

“Not what you want to do,” Kershaw said. “Frustrating for me. Battled as best I could. Got through six, which I guess was somewhat of a positive, but just a frustrating inning.”

The left-hander shut down the Braves (27-29) otherwise — he recorded nine strikeouts to one walk and threw 95 pitches in six innings — but the Dodgers (34-24) couldn’t overcome the Braves’ outburst.

A night after scoring nine runs on four hits in a win, the Dodgers produced a run against Charlie Morton in the first inning on a hit by pitch, a fielder’s choice and two of the Braves’ four errors. They broke up Morton’s no-hitter in the fourth inning, adding three runs with four hits to cut the Braves’ lead to one. But they didn’t score again without Max Muncy in the lineup because of a sprained right ankle.

The Dodgers could’ve used Seager in the two-hole, working behind Mookie Betts in the leadoff spot. A setback is never easy, but he said his experience with significant injuries — he missed most of the 2018 season after Tommy John surgery and a chunk of the 2019 campaign because of a hamstring strain — has helped him deal with the frustration that’s accompanied the broken hand.

The last time the Dodgers faced the Braves, in the NLCS last October, Seager was in the middle of everything and was named NLCS MVP. He followed that up by earning World Series MVP. It was a glimpse into his potential as an elite hitter, and ideal timing ahead of his final season before hitting free agency.

Then he got off to a slow start at the plate — he has a .265 batting average, four home runs and a .783 OPS in 37 games — and made unusual defensive lapses on balls in the hole. Then he broke his hand. Does Seager, who has played in just over half of the Dodgers’ games the last four seasons, worry that he’ll hit free agency with the injury-plagued label on him?

Highlights from the Dodgers’ 6-4 road loss to the Atlanta Braves on Saturday.

“No, because everything in the past was a surgery-based, and I haven’t had those problems since,” Seager said. “It’s not like a muscle where you could’ve stretched, you could’ve drank more water, you could’ve done something to be ready. This is just kind of, you play a game and stuff like this can happen, and that’s what happened.”

The Dodgers put reliever Brusdar Graterol on a rehab assignment with triple-A Oklahoma City last week presumably because they planned on placing him on their roster once he was ready to come off the injured list.

That didn’t happen. Instead, the Dodgers ended the 22-year-old Graterol’s rehab assignment Friday night by activating him from the injured list and optioning him to Oklahoma City.

“He’s healthy,” manager Dave Roberts said. “The ball is coming out [fine], but the slider is not as consistent as it needs to be.”

Denial of responsibility! TechiLive.in is an automatic aggregator around the global media. All the content are available free on Internet. We have just arranged it in one platform for educational purpose only. In each content, the hyperlink to the primary source is specified. All trademarks belong to their rightful owners, all materials to their authors. If you are the owner of the content and do not want us to publish your materials on our website, please contact us by email – [email protected]. The content will be deleted within 24 hours.
badBravesbruisedClaytonDodgersinningKershawLoss
0
Share