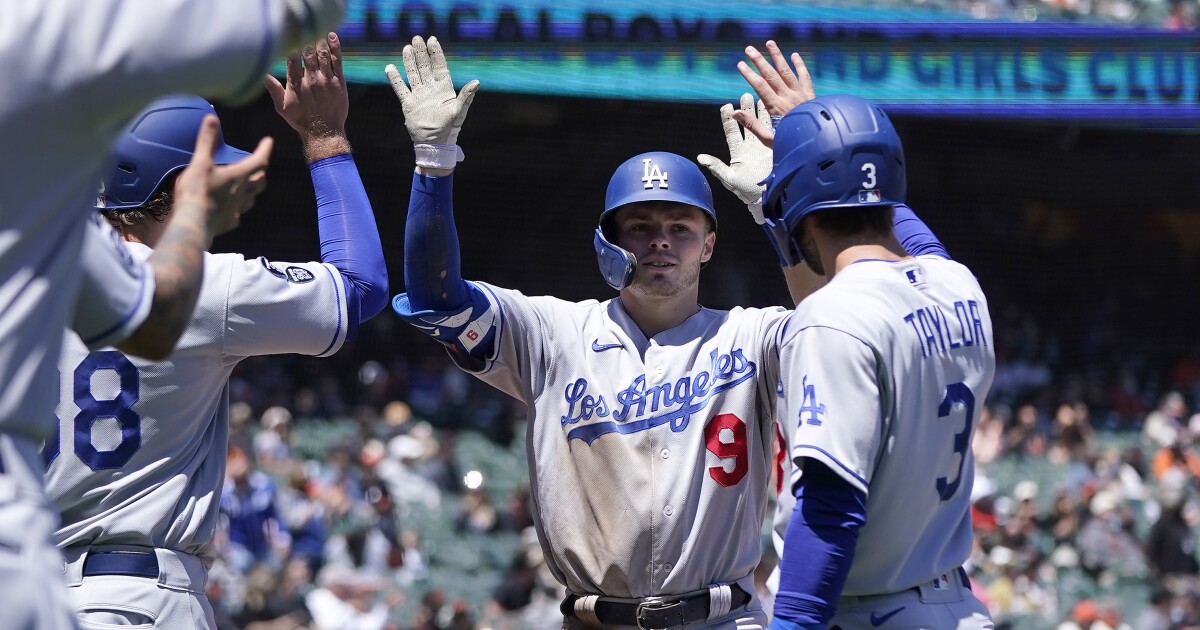 Dodgers don’t let anything faze them in dominant, sweeping win over Giants

The announcement came minutes before first pitch Sunday afternoon: Mookie Betts scratched from the Dodgers’ lineup because of left shoulder soreness. The Dodgers were already without Cody Bellinger and Corey Seager. Most clubs can’t succeed without one of their best hitters; take a peek down the 5 Freeway. The Dodgers were without three as they looked to complete a three-game series sweep of the San Francisco Giants.

The Giants, off to a surprisingly good start this season, entered the weekend in first place in the National League West, two games ahead of the Dodgers. By Sunday, the Giants (28-19) were in third, left to wonder if they can actually compete with their rivals. The Dodgers, meanwhile, have won seven straight games and 11 of 12 ahead of their marquee two-game series against the Houston Astros at a full-capacity Minute Maid Park starting Tuesday.

“We got beat every which way in this series,” Giants manager Gabe Kapler said.

DeSclafani entered Sunday with a 2.03 earned-run average. He gave up 12 earned runs in his first nine starts, and not more than three in one outing. He yielded 10 runs in 2 2/3 innings Sunday, topped off by shortstop Gavin Lux’s second grand slam in less than a week to complete a seven-run third inning.

Urías was thriving, working on a perfect game on 56 pitches through five innings. The left-hander began the sixth inning by getting Curt Casali looking at a slurve for his eighth strikeout to bring up Mike Tauchman.

Urías thought he struck out Tauchman, too, but Tauchman’s checked swing wasn’t called strike three. Tauchman then hit a 55.5-mph spinner to Lux, who couldn’t make the bare-handed charging play. Tauchman reached on an infield single with an expected batting average of .010 to spoil the perfect game.

“Part of my frustration, I think, was that because I think he swung the bat,” Urías said in Spanish.

Highlights from the Dodgers’ 11-5 win over the San Francisco Giants on Sunday.

Two batters later, the shutout went poof, too, when Austin Slater lined a two-run home run. Urías’ outing ended after finishing the inning. He gave up three hits with 10 strikeouts and no walks across six innings. He threw just 89 pitches.

At the plate, he swatted a two-out, two-run double off DeSclafani in the second inning. One inning later, after DJ Peters was intentionally walked to load the bases with two out, he reached on an RBI infield single, becoming the first Dodgers pitcher with three RBIs in a game since Dan Haren in 2014. Lux then smashed his grand slam to continue his torrid May.

“I feel pretty locked in mechanically and I just feel like I can see ball, hit ball, basically,” said Lux, who is batting .342 with three home runs and 16 RBIs since May 2.

The ending soured an otherwise breezy day for the Dodgers. Edwin Uceta, pitching with a nine-run lead, walked two batters and surrendered a two-run double to Mike Yastrzemski before Dodgers manager Dave Roberts summoned Phil Bickford, a right-hander added to the roster before the game, to escape the eighth inning.

In the ninth, Dennis Santana walked the first two hitters he faced, prompting Roberts to call down to the bullpen to have Blake Treinen warm up. It was a reminder of the Dodgers’ lack of depth in the bullpen with five relievers expected to contribute this season on the injured list.

On Sunday, those injuries and the ones that left the lineup short-handed didn’t matter. Seager won’t return for at least another month. Bellinger could be back next weekend. Roberts said he hopes Betts will return Tuesday in Houston. The lineup will be unmatched once at full strength, whenever that is. For now, the Dodgers keep winning anyway.

Three Dodgers played for triple-A Oklahoma City on rehab assignments in Albuquerque on Sunday. Bellinger (fibula) played center field and went one for four with a home run. Zach McKinstry started in right field after playing second base and left field the previous two days. He went one for four with a double. Tony Gonsolin (shoulder) held the Isotopes to one hit over three scoreless innings. He had three strikeouts without a walk and threw 38 pitches.

Roberts said it’s “fair” to expect that Bellinger and McKinstry will be activated next weekend when the Dodgers host the Giants. Gonsolin can’t be reinstated until May 31. He’ll build up to four innings and return as a starter to replace the injured Dustin May in the rotation.

The Dodgers placed right-hander Jimmy Nelson on the 10-day injured list because of right forearm inflammation before Sunday’s game. Bickford was recalled from Oklahoma City to replace him in the bullpen. Nelson, 31, has been charged with six runs — five earned — in 18 2/3 innings across 16 appearances this season. Roberts said he expects Nelson’s stint should be a “short” one. . . . Roberts said outfielder AJ Pollock could return to the team as early as next week. Pollock has been on the injured list since May 15 after re-straining his left hamstring. He stayed in Los Angeles to rehab during the team’s trip.

Denial of responsibility! TechiLive.in is an automatic aggregator around the global media. All the content are available free on Internet. We have just arranged it in one platform for educational purpose only. In each content, the hyperlink to the primary source is specified. All trademarks belong to their rightful owners, all materials to their authors. If you are the owner of the content and do not want us to publish your materials on our website, please contact us by email – admin@techilive.in. The content will be deleted within 24 hours.
DodgersDominantdontfazeGiantsnews updatesports newssports update
0
Share