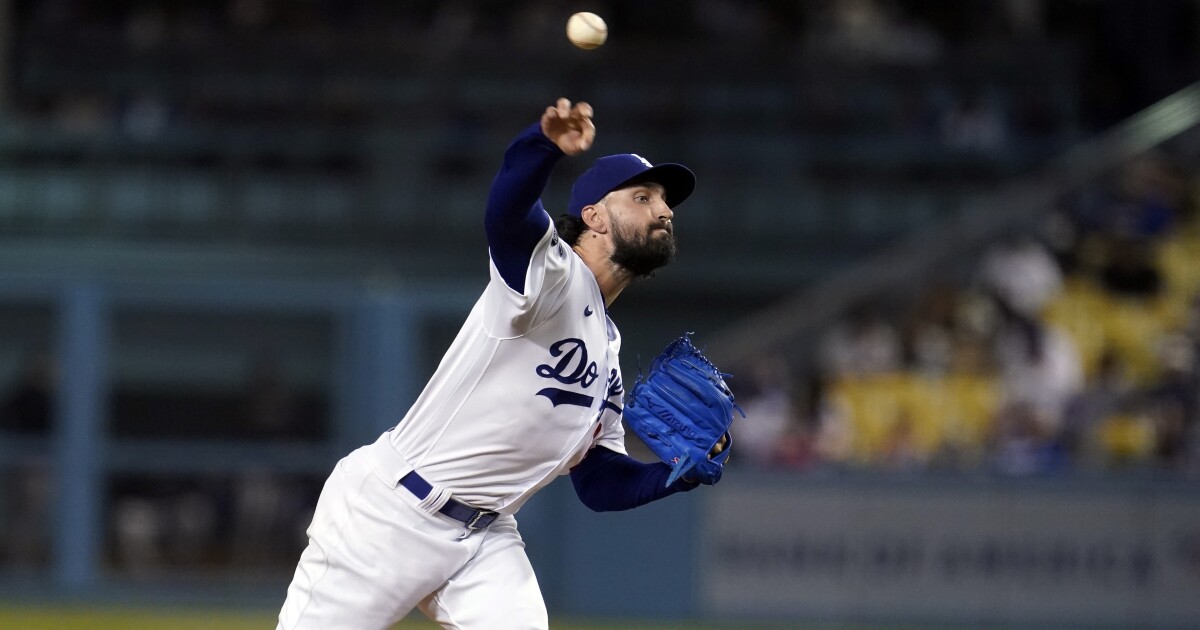 Johnny Wholestaff has been designated for assignment, the Dodgers no longer needing to string bullpen games together with six to nine relievers.

The Incredible Bulk has been optioned, the team no longer needing minor leaguers such as Mitch White and Andre Jackson to pitch the middle innings of games started by openers — relievers pitching only the first inning or two.

For the first time since late June, the Dodgers are healthy enough to employ traditional starting pitchers in five consecutive games, just how they envisioned it in spring training, when they had eight quality starters for five spots.

It’s a good look for them.

Tony Gonsolin gave up two hits in five scoreless innings, striking out six and walking two, Tuesday night to help the Dodgers clinch a playoff spot with an 8-4 victory over the Arizona Diamondbacks in Chavez Ravine.

The right-hander’s second start since coming off the injured list capped a dominant five-man turn through the rotation in which Julio Urias, Walker Buehler, Max Scherzer, Clayton Kershaw and Gonsolin combined to go 5-0 with an 0.86 ERA, giving up three earned runs and 16 hits, striking out 32 and walking six in 31 1/3 innings.

“I didn’t realize that it has been a while since we’ve gone through the rotation with five healthy guys,” manager Dave Roberts said. “It can certainly make a big difference.”

The injuries and loss of Trevor Bauer to a sexual assault investigation in early July reduced the rotation to four and sometimes three starters for much of the second half, forcing the Dodgers into eight true bullpen games and another 30 games or so in which they worked relievers around bulk arms — relievers able to last three or more innings.

But Kershaw returned Monday night to throw 4⅓ solid innings against the Diamondbacks, and Gonsolin looked sharp Tuesday, mixing a fastball that averaged 94.8 mph — a tick up from his season average of 93.5 mph — and touched 95.6 mph with his slider, split-fingered fastball and an improved curve.

The return of Kershaw and Gonsolin gives the Dodgers much-needed depth behind National League Cy Young Award candidates Scherzer and Buehler and Urias as they attempt to chase down the San Francisco Giants for the NL West title. The Dodgers are 2½ games back with 16 to play.

“So to get Clayton back on line, to get Tony back on line, and to have those other three guys having the years they’re having, I love where we’re at.”

Scherzer, a three-time Cy Young Award winner acquired from Washington at the trade deadline, is 14-4 with a major league-best 2.17 ERA on the season and 6-0 with an 0.88 ERA in eight starts for the Dodgers, with 72 strikeouts and five walks in 51 innings.

The Dodgers might have to win a wild card game to reach the division series, but if they can survive that knock-out round, their rotation could give them the edge in any five- or seven-game series.

“Starting pitching is such a big part of the postseason, and we have some really good ones,” Dodgers third baseman Justin Turner said. “So, we like our team, we like where we’re at and the way we’re playing right now.”

Gonsolin is not expected to make the playoff rotation, but he could solidify a rotation spot in 2022 with a strong finish. He worked ahead in the count and was efficient Tuesday night, needing only 67 pitches — 45 of them strikes — to complete five innings.

“Just feeling more comfortable within my mechanics, not trying to overthrow the fastball and be too fine with the off-speed stuff, and just attacking guys,” Gonsolin said. “I’ve been grinding with the team the whole year, personally, but to be able to contribute to [the playoff clincher] makes me feel a lot better.”

Gonsolin was also encouraged by a looping 80-mph curve that he threw 10 times, five for called strikes and one for a swinging strike. The curve has been his least-thrown pitch in his two big league seasons — of his 705 pitches last season, 42 were curves; of his 807 pitches this season, 65 have been curves.

“It was nice to land some curveballs for strikes. I haven’t been able to do that for a while,” Gonsolin said. “It’s been something I’ve been working on my whole career, trying to get that pitch in the zone more often than not. Tonight, it felt great to have that come around. It was very effective.”

Denial of responsibility! TechiLive.in is an automatic aggregator around the global media. All the content are available free on Internet. We have just arranged it in one platform for educational purpose only. In each content, the hyperlink to the primary source is specified. All trademarks belong to their rightful owners, all materials to their authors. If you are the owner of the content and do not want us to publish your materials on our website, please contact us by email – [email protected]. The content will be deleted within 24 hours.
Loading...
DodgersecstaticfivemanMonthsnews updatereturnRotationsports news
0
Share