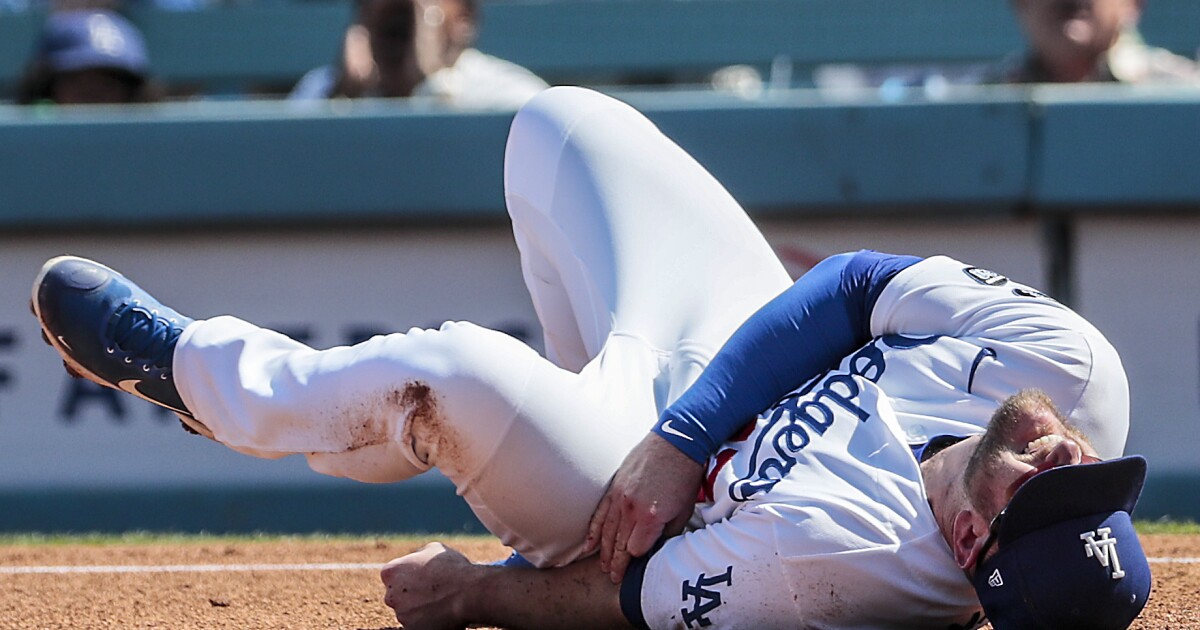 No matter how frightening Max Muncy’s left elbow injury seemed to those watching Sunday’s game in Dodger Stadium or on television, it felt a lot worse to the man who suffered it.

“It was a very scary moment,” the Dodgers first baseman said during Tuesday’s workout in advance of Wednesday night’s National League wild-card game against the St. Louis Cardinals. “I definitely felt like my arm wasn’t there. Thankfully, things aren’t as bad as they could have been.”

Dodgers manager Dave Roberts said Muncy’s ulnar collateral ligament is intact and that the slugger won’t require surgery, but Muncy could be sidelined for the entire postseason.

He was injured on a play that started with Milwaukee infielder Jace Peterson’s dribbler in front of the plate in the third inning of Sunday’s 10-3 win by the Dodgers. Catcher Will Smith grabbed the ball, but his off-balance throw veered inside of the bag, forcing Muncy to stick his left arm out as Peterson sprinted down the line.

Muncy couldn’t pull his arm back before Peterson ran through it, bending the arm backward as Muncy spun to the ground in pain. Muncy walked off the field clutching his left arm, and in the 48 hours since, he has replayed the injury “too many times” in his head.

“The noise … I hear my elbow popping … I did dislocate my elbow on the play, and it popped back in when I was rolling on the ground,” Muncy said. “They said there is some other damage in there. We’re going to know more in the next few days about that.”

Roberts said the Dodgers are holding out a “glimmer of hope” that Muncy, who is batting .249 with an .895 on-base-plus-slugging percentage and a team-high 36 homers and 94 RBIs, will rejoin the team if it plays deep into October.

“I don’t know what that really means, but I do know that he’s been known to heal quickly, and he’s determined to try to help us in any way he can, and I don’t want to close the door completely on that,” Roberts said. “So I guess, looking at where we were on Sunday, it’s probably the best-case scenario.”

Roberts said he hadn’t decided as of Tuesday whether Albert Pujols, Cody Bellinger or Matt Beaty would start at first base in place of Muncy on Wednesday night. Muncy, meanwhile, will break out the pompoms for the game.

“I’ll be cheering as loud as anybody in the dugout, doing my best to help them out any way I can,” Muncy said. “If I can pick something up, tell them what’s coming, I’ll do anything I can.”

Roberts announced Tuesday that Clayton Kershaw, who left Friday night’s game against the Brewers because of another left forearm injury, will not return for the playoffs, officially ending the veteran left-hander’s last season before he enters free agency.

The three-time Cy Young Award winner, who missed most of July and all of August because of a forearm injury, did not suffer any ligament damage and will not need Tommy John surgery, Roberts said.

Roberts didn’t say what the timeline for Kershaw’s recovery would be but noted that scans showed the worst-case scenario was averted.

“The great thing is that the scans showed there is no ligament damage,” Roberts said, “so that’s something that is a sigh of relief for everyone.”

Frenemies for a night

Adam Wainwright, the 40-year-old Cardinals right-hander who will start Wednesday night’s game, described Pujols as a “great friend” whom he talks to regularly on FaceTime and on the phone.

But when asked if there was anything “cool” or “significant” about opposing Pujols, a teammate on Cardinals teams that won the 2006 and 2011 World Series, Wainwright said, “Not anymore. Nothing is cool about that team over there right now to us. They had a great regular season. They are a tough team.

“Albert is a great friend, but right now we are fighting. We’ll make up afterwards, but we’re fighting right now.”

The last time Jack Flaherty pitched in Dodger Stadium, on May 31, the Cardinals right-hander departed after five innings because of a left oblique strain that sidelined the former Studio City Harvard-Westlake High star for 2½ months.

Flaherty, who was 8-1 with a 2.90 ERA in 11 starts at the time, returned in mid-August but suffered a right shoulder strain that sidelined him for another month. The team’s opening-day starter is now trying to salvage his season out of the bullpen.

Flaherty made two relief appearances last week, throwing a pair of scoreless innings with three strikeouts against the Brewers and Chicago Cubs, and manager Mike Shildt said he will be in the bullpen Wednesday night.

“We’re most optimistic about the last outing for Jack,” Shildt said. “He was definitely headed to an All-Star game and Cy Young consideration. Then he missed two months and came back with a sore shoulder. But he’s come back and thrown a couple of times, and his stuff was back in his last outing. We’re confident that he feels good, and his stuff looks crisp.”

Roberts said that right-hander Walker Buehler, who threw five innings and 79 pitches in Sunday’s regular-season finale, would not be on the roster for the wild-card game but that left-hander Julio Urías would be available out of the bullpen. … If the Dodgers advance, Buehler and Urías will start the first two games of the NL Division Series against the San Francisco Giants. … Jaime Jarrín, the longtime Spanish radio voice of the Dodgers who announced on Sept. 28 that he will retire after the 2022 season, his 64th with the team, will throw out the ceremonial first pitch before Wednesday night’s game.

Denial of responsibility! TechiLive.in is an automatic aggregator around the global media. All the content are available free on Internet. We have just arranged it in one platform for educational purpose only. In each content, the hyperlink to the primary source is specified. All trademarks belong to their rightful owners, all materials to their authors. If you are the owner of the content and do not want us to publish your materials on our website, please contact us by email – [email protected]. The content will be deleted within 24 hours.
ArmDescribingDodgersfeltinjuryMaxMuncynews update
Share

Facebook ‘operating in the shadows’, knows how to make its platforms safer, but won’t do it: Ex-employee and whistleblower