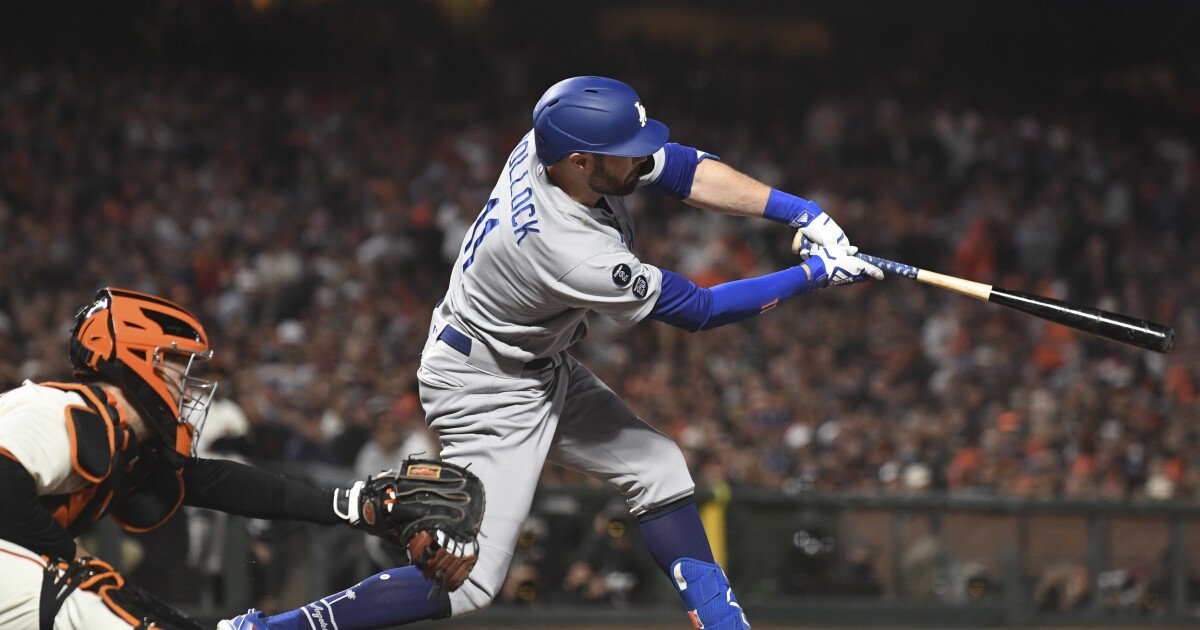 The good news for the Dodgers as they clung to a one-run lead in the top of the sixth inning in Game 2 of the National League Division Series on Saturday night was that they loaded the bases with one out. The bad news was Cody Bellinger and AJ Pollock were due up next.

San Francisco Giants manager Gabe Kapler swapped Kevin Gausman with Dominic Leone, giving time for the tension to build at Oracle Park. It was the biggest moment in the Dodgers’ season, a chance to pad their cushion in their effort to avoid the dreaded 0-2 best-of-five series hole.

Bellinger and Pollock were a combined 0 for 9 with seven strikeouts in the series up to that point. Bellinger was two for 53 with 25 strikeouts against the Giants this season. Pollock was nine for 61 with 22 strikeouts in his Dodgers postseason career.

All that history, sample sizes ample enough to not disregard, quickly became obsolete. Bellinger lined the first pitch he saw to the wall in left-center field for a two-run double. Pollock then matched Bellinger, ripping the next pitch down the left-field line to trade places. The sudden blows deflated the rowdy ballpark and gave the Dodgers a 6-1 lead in the eventual 9-2 victory.

And yet the margin felt tenuous in the bottom of the inning. Joe Kelly, called on to replace Julio Urías, issued a one-out walk to LaMonte Wade Jr. before Buster Posey poked a single to right field. The Giants, authors of so many late-inning magic shows in 2021, were setting another one. Then the Dodgers’ defense abruptly quashed that momentum.

Second baseman Trea Turner supplied the first gem, a sliding stop on Wilmer Flores’s ground ball that would’ve scored a run had it gotten through. Instead, Turner flipped the ball to shortstop Corey Seager at second base for the second out.

Before that, Urías held the Giants to one run on three hits over five innings and produced half of the Dodgers’ scoring output in his fourth career postseason start.

The game was scoreless with two outs in the second inning when Gausman fell behind Pollock 2-0 and Kapler opted to intentionally walk him to bring up Urías. The left-hander wasn’t an automatic out during the regular season. He batted .203. In one start at Oracle Park in May, he went 2 for 3 with a double and three RBIs. But Kapler played the numbers and the move backfired.

On the mound, Urías gave up a run in the second inning on Donovan Solano’s sacrifice fly and nothing else. He retired 12 of the final 13 batters he faced before Dodgers manager Dave Roberts had Gavin Lux pinch-hit for him in the sixth. Urías threw just 72 pitches.

Urías started Saturday because Clayton Kershaw re-injured his left elbow in his final regular season start. The future Hall of Famer would’ve been the Dodgers’ No. 3 starter in the postseason, relegating Urías to the hybrid role he assumed last October between starter and reliever. Kershaw instead watched the game from the dugout in a hoodie.

Kershaw knows he won’t be pitch again in 2021. The left flexor strain he suffered is too severe to return in time to help in the postseason. He knows he won’t need surgery, at least for now. His hope is that the platelet-rich plasma injection he recently received in his left forearm will suffice.

What he doesn’t know is whether he’ll throw a pitch for the Dodgers ever again, or so he reiterated Friday when he addressed a group of reporters before Game 1.

“I think I said a while ago I have no idea,” Kershaw said. “Still have no idea. So, we’ll win the World Series and go from there.”

The initial fear was that Kershaw tore the ulnar collateral ligament in his elbow when he left his start against the Milwaukee Brewers in the second inning. He recalled instantly thinking the injury was more severe than the two setbacks he experienced in July that sidelined him for over two months. He assumed his season was over.

“We have tons of time so we’re going to be cautious this time,” Kershaw said. “I’ve never given it the rest that it needed.”

Kershaw said he should be ready for spring training because he doesn’t need Tommy John surgery, but he isn’t sure when he’ll be cleared to throw a baseball again. He’ll have all winter to work back into baseball shape for 2022. The three-time Cy Young Award winner turns 34 in March. Next season could be his 15th with the Dodgers or his first on another team.

For now, he said, next season isn’t on his mind. A year after heaving the load of a World Series off his shoulders, he’ll watch his team go on without him as they strive to win back-to-back championships for the first time in franchise history. He said it’ll be more stressful watching the games than pitching in them. It’s more frustrating, too, not having control on the outcome.

On Saturday, he watched another left-hander deliver in his place. He watched two teammates bust out of funks. He watched two defensive highlights undercut the Giants just as it seemed that a comeback was imminent. He watched the Dodgers effectively save their season.

Denial of responsibility! TechiLive.in is an automatic aggregator around the global media. All the content are available free on Internet. We have just arranged it in one platform for educational purpose only. In each content, the hyperlink to the primary source is specified. All trademarks belong to their rightful owners, all materials to their authors. If you are the owner of the content and do not want us to publish your materials on our website, please contact us by email – [email protected]. The content will be deleted within 24 hours.
DodgersgameGiantslifenews updateNLDSOffenserout
Share

Affairs of the heart spell double trouble for female leaders