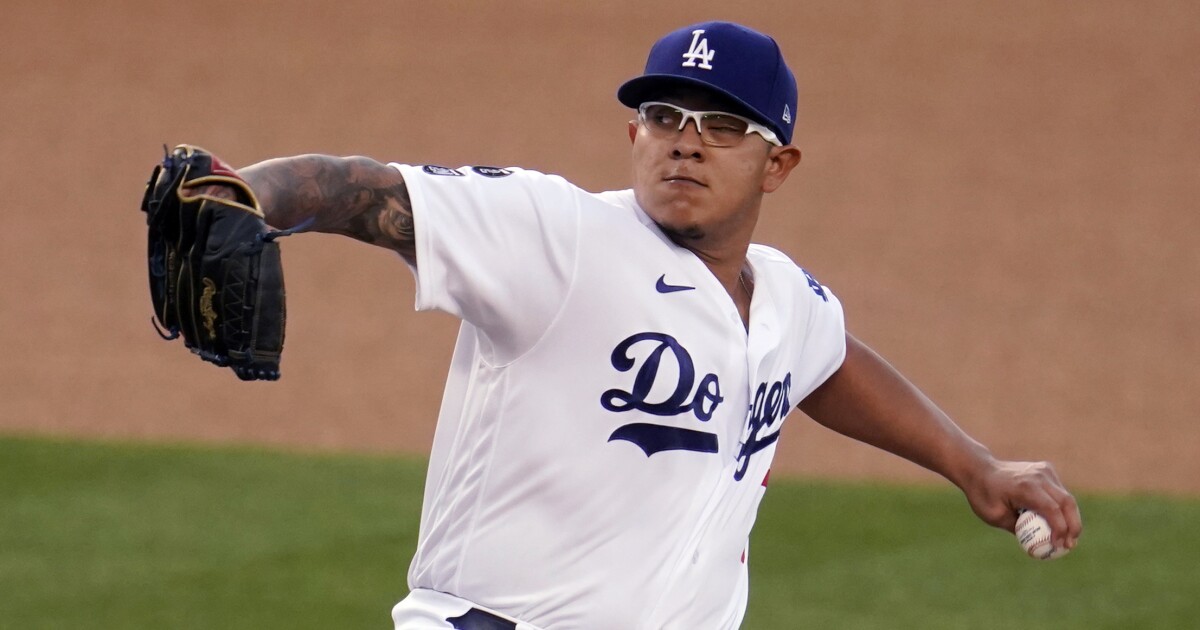 It had been almost a month since the Dodgers strung two wins together, a stretch of futility that seemed unfathomable in early April, when the defending World Series champions bolted out of the gates with 13 wins in 15 games.

Any air of invincibility the Dodgers had was punctured with a 3½-week nosedive in which they lost 15 of 20 games, but with Wednesday’s 7-1 victory over the Seattle Mariners, which completed a two-game sweep in Chavez Ravine, the Dodgers may have regained some of that familiar swagger.

One night after Gavin Lux’s three-run, eighth-inning homer fueled a dramatic 6-4 come-from-behind win, the Dodgers busted open a one-run game with a four-run fifth and rode the dominant left arm of Julio Urias to a convincing win.

It marked the first time since April 16-17 — when the Dodgers completed an eight-game win streak over Washington, Colorado and San Diego — that they won two straight.

“This is the team that we are,” said first baseman Max Muncy, who keyed the fifth-inning rally with a two-run homer, his fourth in seven games. “We really haven’t showed it at all the last couple weeks, and it’s been frustrating, a long couple of weeks. Hopefully these two games can jump-start us a little bit.”

Urias rebounded from last Friday’s five-inning, five-run, eight-hit loss to the Angels with a superb seven-inning start, giving up one run and two hits, striking out six and walking one. He retired the first 13 batters he faced and threw first-pitch strikes to 18 of 24 hitters to improve to 5-1 with a 3.26 ERA.

“He mixed really well, he was getting ahead of a lot of hitters, by way of the fastball, the breaking ball, the changeup, and he kept guys off balance,” manager Dave Roberts said. “To me, I thought he cruised through that game.”

Urias, who threw 87 pitches — 64 for strikes — had never completed seven innings as a professional before this season. He has done it four times in eight starts this year. In two 2021 starts against the Mariners, Urias has allowed one run and three hits and struck out 17 in 14 innings.

“I’m very proud to go through the lineup three times, to have that focus, to have that ability,” Urias said through an interpreter. “It’s something I’m very happy about.”

The Dodgers held a 2-1 lead in the fifth when Justin Turner poked a two-out single to right-center off reliever Will Vest. Muncy, the paragon of plate discipline who leads the major leagues with 36 walks, pounced on a first-pitch changeup, driving his seventh home run 415 feet to center for a 4-1 lead.

Will Smith doubled to right, Chris Taylor walked, and Matt Beaty smoked a one-hop RBI single under the glove of second baseman Ty France for 5-1 lead. Lux capped the rally with an RBI single to left-center to make it 6-1, and Pollock’s pinch-hit RBI single in the seventh made it 7-1.

In addition to his two hits, Muncy, the cleanup man, made a nice catch in foul territory for the second straight night, crashing into the protective netting while snagging Kyle Lewis’ popup in the fourth inning.

Leadoff man Mookie Betts and No. 2 hitter Corey Seager combined to go one for 10 Wednesday night, but Beaty and Lux, the seventh and eighth hitters, combined to go four for seven with four RBIs. Beaty has 18 RBIs since being recalled from the alternate training site on April 24 and is five for 11 with seven RBIs when hitting with the bases loaded this season.

“You look at Gavin coming on, Matt Beaty coming on, it just adds that length to the lineup,” Roberts said. “You mix that with good pitching, good defense, what Max has done consistently and the guys in the middle of the order. You have scoring opportunities, and just all around we’re playing much better.

“We have too good a talent to have guys continue to struggle collectively, so it’s nice to see some guys come out of it and put some wins together.”

Manager Dave Roberts said the Dodgers have had 85% of their players, coaches and others with Tier 1 access receive their final doses of a COVID-19 vaccine, allowing them to ease some health and safety protocols.

Masks can now be dropped from dugouts and bullpens, and fully vaccinated players and staff can eat and drink on flights and gather in indoor spaces such as hotels without masks or social distancing.

Roberts hopes the vaccines help the Dodgers avoid an outbreak like the one the San Diego Padres had this week, when five players, including star shortstop Fernando Tatis Jr., were lost to positive tests or contact-tracing.

“Absolutely,” Roberts said, when asked if reaching the threshold could give the Dodgers a competitive edge. “I think we were very mindful of that coming into the season, of trying to get to that 85% while respecting peoples’ personal decisions, to stay away from a situation like that.”

Corner infielder Edwin Rios will undergo surgery next week to repair a partially torn labrum in his right shoulder, ending his season. Rios hit .250 with a .946 on-base-plus-slugging percentage, eight homers and 17 RBIs in 32 games in 2020 but .078 (9 for 51) with a .354 OPS, one homer and one RBI in 25 games this season. … Top pitching prospect Josiah Gray, scratched from Tuesday’s triple-A start, was diagnosed with a shoulder impingement and will be shut down for a week to 10 days, but his injury is not believed to be serious.

Denial of responsibility! TechiLive.in is an automatic aggregator around the global media. All the content are available free on Internet. We have just arranged it in one platform for educational purpose only. In each content, the hyperlink to the primary source is specified. All trademarks belong to their rightful owners, all materials to their authors. If you are the owner of the content and do not want us to publish your materials on our website, please contact us by email – [email protected]. The content will be deleted within 24 hours.
Loading...
DodgersMarinersmonthnews updatesports newssports updatestreaksweep
0
Share