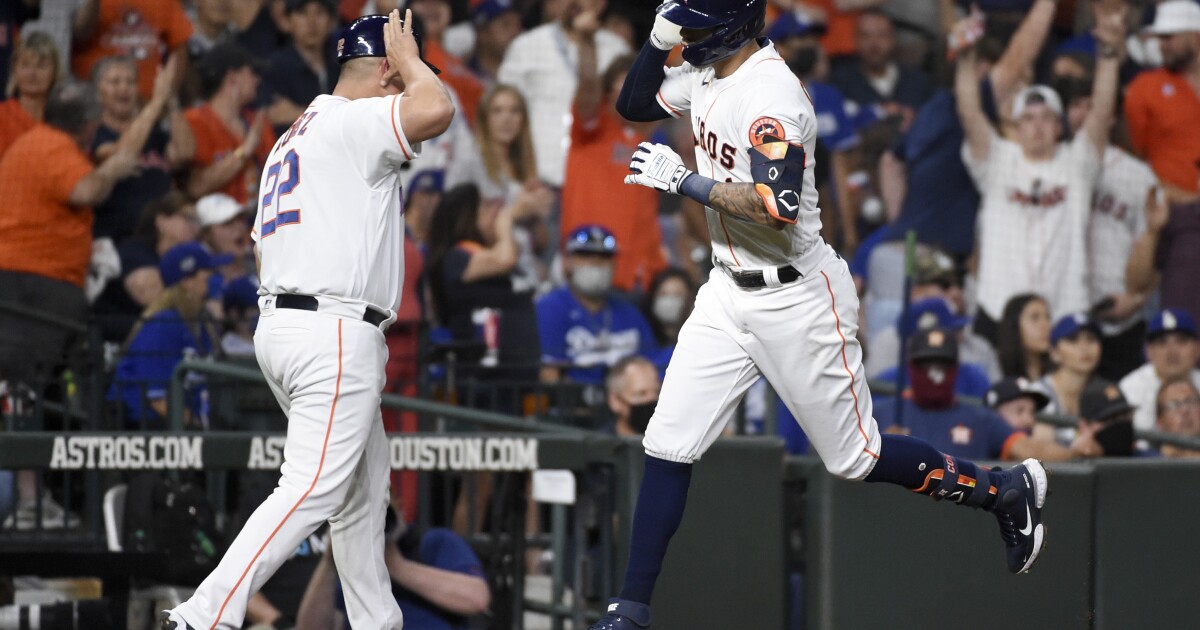 Dodgers’ Trevor Bauer has to bow to the Astros

Maybe Carlos Correa was trying to lower the temperature on the back-and-forth rhetoric between pitcher Trevor Bauer and the Houston Astros, or maybe the star shortstop just has a good poker face.

Whatever the case, Correa claimed he got no extra satisfaction from Houston’s 5-2 victory over Bauer and the Dodgers on Wednesday night, or from hitting a sixth-inning tie-breaking home run off Bauer into the left-field seats at Minute Maid Park in Houston.

“It’s just another win,” Correa said. “A lot of people have said a lot, and that doesn’t mean we go out there every single day and try to win because of what they said. It doesn’t mean much to us. We just try to go out there and win games, day in and day out.”

Bauer, the 2020 National League Cy Young Award winner who signed a three-year, $102-million deal with the Dodgers in February, entered Wednesday’s game with an 8-0 record and 2.90 ERA in nine career starts against Houston, and he’s gone to great lengths in an effort to “own” the Astros on social media, too.

In a 2018, Bauer implied in a tweet that the Astros doctored baseballs to increase spin rates. In April 2019, Bauer, then pitching for the Cleveland Indians, gave up one run and four hits in eight innings of a 2-1 win over Houston, holding Astros third baseman Alex Bregman hitless in three at-bats.

The following day, Bauer trolled Bregman by tweeting a video in which he said, “What’s up little buddy? Did I dominate you last night?” The clip then cuts to a Bregman bobblehead doll nodding up and down to the song, “Oh Yeah,” by Yello.

Asked to respond, Bregman said: “If he calls that dominating, I’m very happy for him. We’ll see him again.”

“You guys are somewhat friends, though, right?” a reporter asks.

“No, we’re not friends,” Bregman said.

Bauer was one of baseball’s most outspoken players in his response to the Astros’ sign-stealing scandal, saying in February 2020 that, “I’m not going to let them forget the fact that they are hypocrites, they are cheaters and that they’ve stolen from a lot of other people and the game itself.”

Last August, after Dodgers reliever Joe Kelly was suspended for throwing at multiple Astros players, Bauer, then with the Cincinnati Reds, planned to wear “Free Joe Kelly” cleats for a game against Kansas City.

When Major League Baseball warned him he’d be removed from the game and disciplined, Bauer tweeted a picture of the cleats to Correa, saying, “Hey Carlos, if you want these hit me with a shipping address, I got you (fist-bump emoji).”

So it was no surprise when a Minute Maid Park crowd of 30,939 showered Bauer with boos when the right-hander was announced before the game — not that it had much effect on Bauer, who seems to thrive on being cast as a villain.

When fans in San Francisco booed him off the mound last weekend, Bauer cupped one hand behind his ear and raised both arms into the air as if to egg them on.

“They’re gonna hate me anyway,” Bauer said afterward, “so might as well lean into it.”

“I think every player has certain motivations — some guys don’t want to be embarrassed, some guys play for money, some play for notoriety,” Roberts said. “I think with Trevor, that fan engagement, that kind of gamesmanship, the stuff on the field, on the mound, it just challenges him to back it up.

“So if you’re gonna be on the mound and bring the crowd into it, then you have to back it up, and I think he uses that as extra motivation, too.”

Bauer gave up a leadoff homer to Jose Altuve on a 93-mph fastball that was slightly up in the zone and walked three batters in a 37-pitch first inning Wednesday night.

“I’m always ready to hit, and it was a good pitch up in the zone,” Altuve said of his homer. “I think he tried to throw inside, and he threw it little bit in the middle. I put a good swing on it, which was huge for me, because everyone knows he’s one of the best pitchers out there.”

Bauer struck out Taylor Jones with an elevated 97-mph fastball to escape the bases-loaded jam in the first and needed only 63 pitches to limit the Astros to one run and three hits over the next five innings, earning Roberts’ praise for channeling his emotions.

“Whether it’s being on the road in a hostile environment or being at home and feeding off the home crowd,” Roberts said, “I don’t think it affects him.”

Bauer didn’t think his 2-1 cut-fastball on the outer half of the plate to Correa in the sixth was a bad pitch. Correa reached out and poked a 360-foot drive that landed into the Crawford Boxes for a two-out homer and a 2-1 lead.

“My fastball plays up in the zone well, and [Altuve] hit it, so good on him,” Bauer said. “I threw a really good cutter to Correa in a good spot. I think he got fooled on it a little bit, but he’s a good hitter. He made an adjustment on it and he was able to get it in the air. I’m not upset at the pitches. Those are good hitters.”

There were a lot more baseballs flying around Minute Maid Park on Wednesday night — Aledmys Diaz also hit a two-run homer off Dodgers reliever Nate Jones in the seventh, and Dodgers third baseman Sheldon Neuse hit a 430-foot homer in the eighth — than invective between the clubs.

Bauer couldn’t beat the Astros, so he had no choice but to praise them.

Denial of responsibility! TechiLive.in is an automatic aggregator around the global media. All the content are available free on Internet. We have just arranged it in one platform for educational purpose only. In each content, the hyperlink to the primary source is specified. All trademarks belong to their rightful owners, all materials to their authors. If you are the owner of the content and do not want us to publish your materials on our website, please contact us by email – [email protected]. The content will be deleted within 24 hours.
AstrosBauerbowDodgersnews updatesports newssports updatetechi live
Share

Scientists to cut the ‘key’ to an unhackable 5G network