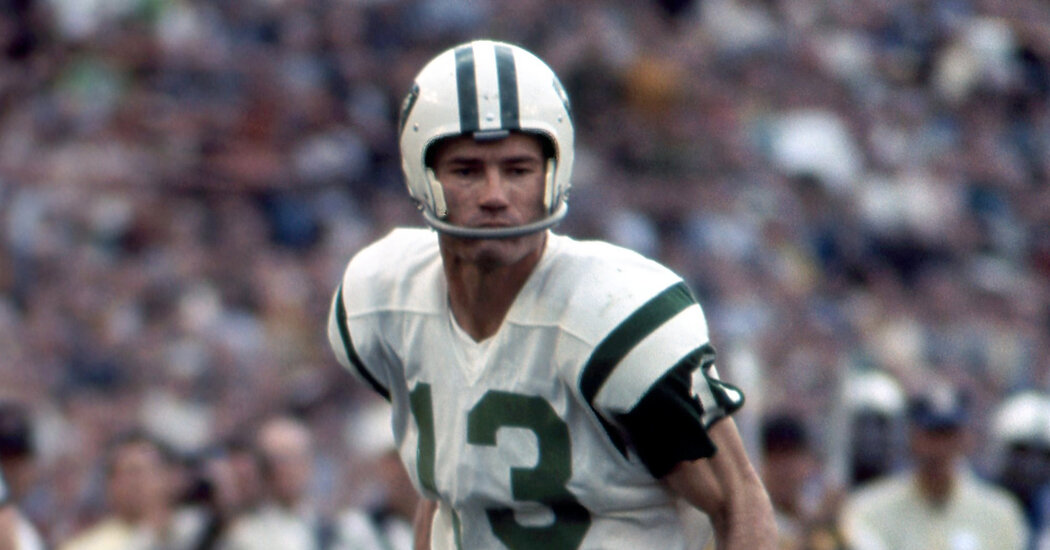 Don Maynard, the Hall of Fame wide receiver who teamed with Joe Namath in the passing attack that propelled the Jets to their storied 1969 upset victory in the Super Bowl, died on Monday at an assisted living facility in Ruidoso, N.M. He was 86.

The cause was a combination of health problems, including dementia, his son, Scot, said.

Maynard arrived in the N.F.L. with the 1958 Giants as a little known halfback and safety out of Texas Western College, showing up at training camp with a cowboy hat, matching Western attire, cowboy boots and long sideburns. The Giants already had Frank Gifford, Kyle Rote and Alex Webster in their backfield, so Maynard saw limited action that season.

He received the opening kickoff (touching the ball down in the end zone) in the thrilling 1958 N.F.L. championship game in which the Giants were beaten by the Baltimore Colts in sudden-death overtime, but he didn’t carry the ball or catch a pass that afternoon. The Giants cut him the following summer.

By the time Maynard played in another storied championship game, the Jets’ 16-7 win over the N.F.L.’s heavily favored Colts in Super Bowl III on Jan. 12, 1969 — an unforgettable victory that brought their American Football League long-sought credibility — he had become one of pro football’s most dynamic receivers.

“Maynard is one of those lean and hungry Texans who can run forever,” Jets Coach Weeb Ewbank once told Sports Illustrated.

Ewbank had previously coached the Colts’ future Hall of Fame receiver Raymond Berry, who ran brilliant pass routes to make up for just average speed. “Raymond was usually tackled the instant he caught the ball,” Ewbank said. “Give Don a step and he’s gone.”

When Maynard retired, having played 13 of his 15 seasons for the Jets, his 633 receptions for 11,834 yards were pro football records. He caught 88 touchdown passes, averaging 18.7 yards per catch, and played in four Pro Bowls. He was inducted into the Pro Football Hall of Fame in Canton, Ohio, in 1987, the second player, after Namath, to go in as a Jet.

Maynard, 6 feet and 180 pounds, was the first player to sign with the future Jets franchise when it entered the fledgling A.F.L. as the Titans in 1960, and he quickly became one of the league’s leading receivers, working with quarterbacks who came and went. When Namath was signed by the Jets in 1965 after leading the University of Alabama to a national championship, Maynard finally had a quarterback who could consistently unleash passes to catch up with his downfield sprints.

When the Jets played the Oakland Raiders at Shea Stadium in December 1968 for the A.F.L. championship and a Super Bowl berth, Maynard played what he regarded as his greatest game.

Hampered by a sore hamstring, he caught six passes for 118 yards and two touchdowns in the Jets’ 27-23 victory. He had a 14-yard touchdown reception in the first period, and his 6-yard scoring catch in the fourth quarter provided the margin of victory.

His most spectacular play came when he beat the Raiders’ defensive back George Atkinson on a 52-yard pass from Namath on the game’s decisive drive.

“When Namath threw that ball late in the game, it came to me at about 10 o’clock,” Maynard told Pro Football Digest. “But the wind caught it, and my head was up, looking at the sky, and I turned my whole body around to follow it. The ball went from 10 to 12 o’clock to 2 o’clock, and I kept turning and hung onto it, and I went out of bounds at the 6-yard line.”

He called that reception “the greatest catch I ever made.”

“Don told me that he might be able to get by Atkinson deep,” Namath said after the game. He did just that by about one step, then caught a rollout pass from Namath for the game-winning touchdown.

The Jets used Maynard, still not fully recovered from his hamstring problem, as a decoy in the Super Bowl. Namath threw only three passes to him, all incomplete. But the Colts’ secondary concentrated on Maynard, allowing receiver George Sauer Jr. to get open for eight catches covering 133 yards.

Donald Rogers Maynard was born on Jan. 25, 1935, in Crosbyton, Texas, a small town about 40 miles east of Lubbock. He played football in high school, but his No. 1 sport was track and field, in which he concentrated on the sprints and hurdles.

Maynard played for three seasons at Texas Western (now the University of Texas at El Paso), then was selected by the Giants in the 1957 N.F.L. draft as a ninth-round future pick. After one year with them, he played one season for the Hamilton Tiger-Cats of the Canadian Football League, then joined the Titans, coached by Sammy Baugh, the future Hall of Fame quarterback, who had been Maynard’s coach in the Blue-Gray college all-star game.

After 13 seasons as a Jet, Maynard was traded to the St. Louis Cardinals. He played one season for them and another in the World Football League before retiring.

He was a financial planning consultant after his playing days.

In addition to his son, Maynard is survived by his wife, Anna Maynard; a daughter, Terry Perrin; and five grandchildren.

When Maynard joined the Titans, he adopted the same style he had as a Giants rookie.

“Don was the first guy I saw,” linebacker Larry Grantham, another of the original Titans, told Sports Illustrated. “He had those long sideburns, and he was sitting on one of those old New England stone walls wearing cowboy boots, Levi’s, a big Western hat and a belt with a huge brass buckle. The whole thing was unreal. I mean, where was the rodeo?”

Denial of responsibility! TechiLive.in is an automatic aggregator around the global media. All the content are available free on Internet. We have just arranged it in one platform for educational purpose only. In each content, the hyperlink to the primary source is specified. All trademarks belong to their rightful owners, all materials to their authors. If you are the owner of the content and do not want us to publish your materials on our website, please contact us by email – [email protected]. The content will be deleted within 24 hours.
ChampionDiesDonFameHallJetsMaynardnews update
Share