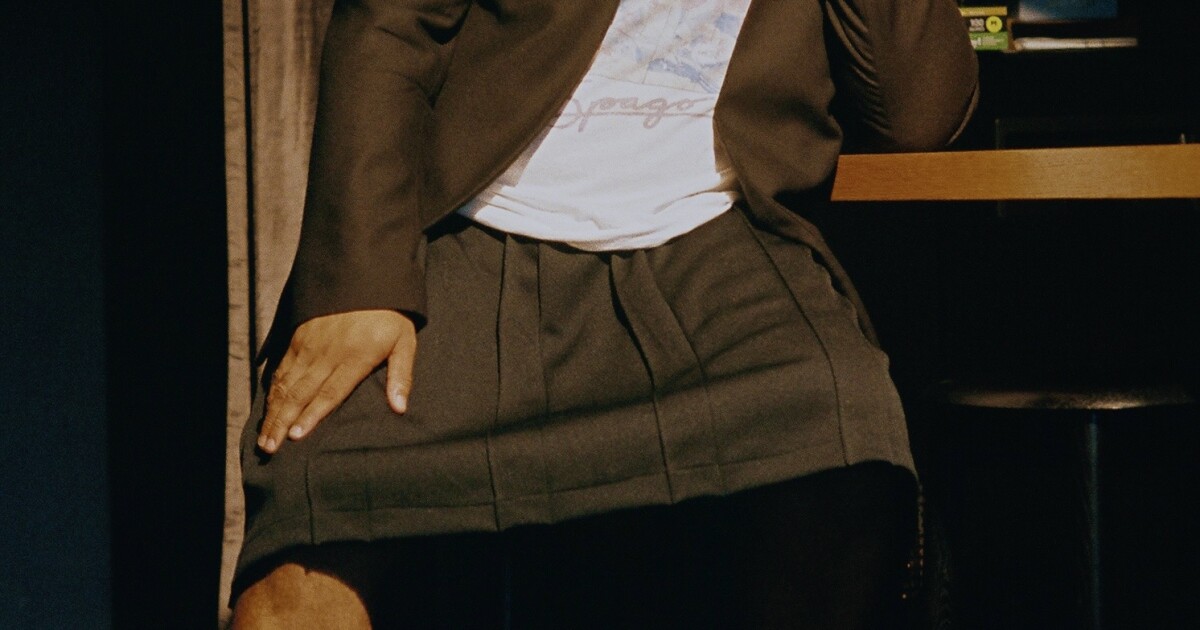 This story is part of Image issue 5, “Reverence,” an exploration of how L.A. does beauty. See the full package here.

The first thing I noticed was my legs. I have, for most of my life, had hairy legs. Not “midcentury suburban carpet” hairy, but certainly on the more substantial end of the spectrum. My thighs are thick, but below the knee, my calves, shins and ankles are whatever shape you’d describe as “pleasing to the eye.” That said, I hate showing them off. As a lifelong Californian, I am well versed in wearing shorts purely for survival in the summer months, but necessity is usually the only reason I bother exposing my gams to the world.

This was my first time trying on a skirt. What I experienced in the dressing room at Dover Street Market in the Arts District was a different sensation than I had encountered. I could feel air flowing! On my giant thighs! My initial thought was, “What if I step over a subway grate like Marilyn Monroe in that movie you probably haven’t seen?” Then I remembered I live in L.A., and I could easily avoid subway grates for the rest of my life if I wanted to.

I eventually purchased a pleasantly slimming, black Comme des Garçons after what felt like hours of combing through rack after rack of avant-garde, expensive, gender-fluid clothing. Buying a type of clothing you’ve never worn before can be an intensely mystifying experience, one where a lack of reference points can make shopping feel similar to cooking a three-course meal in the dark. With your hands tied behind your back.

I’ve resolved to make the skirt a strictly formal part of my wardrobe, only coming out for evening socializing when the occasion requires a bit of peacocking. If, for some reason, I’m invited to an art gallery opening to offer such scintillating commentary as “Oh, I like that color” or “The brushwork here is … present,” then a skirt will do. Maybe not a trip to Ralphs, though. I’m still trying to find my comfort zone with this new piece of clothing; but the men around L.A. embracing the skirt trend are doing so with even more aplomb.

Do a prolonged dive into fashion journalism in 2021 and chances are good you’ll stumble upon a breathless report declaring that this is finally the moment when cisgender men embrace skirts. Several of them have been penned just on GQ.com in the last several months. In a style landscape devoid of monocultural trends, the cis man’s skirt is both a last best hope for sartorial conformity and a dividing line between tribes.

Even though men have been wearing skirts for centuries, it’s only been in the last few that we decided they’re not allowed to. And those draconian social “rules” are why the skirt has become a popular shibboleth in our divided times. To be a cis, hetero man like Harry Styles or Russell Westbrook rocking a Vivienne Westwood or Thom Browne skirt is a sign of an adventurous, liberated sensibility to outside observers. If you’re Fox News bloviator Laura Ingraham, the men’s skirt is a perfect opportunity to prove how into “traditional gender roles” you are. The men’s skirt can be robbed of context and history. It can be reduced to a talking point, a fad or a political statement if you truly want to. Certainly, plenty of people will continue to do so as long as they can get attention for it. But in Los Angeles, where fashion has no rules, the men’s skirt is more than just a talking point. It’s a chance for us to finally grapple with the most crucial question to millions of Angelenos: What does it mean to be beautiful?

Beauty is a word our culture tends to associate with femininity. Never once did I think of calling my father “beautiful.” I have enough male friends and acquaintances who are working actors that I could very comfortably call some of them “beautiful,” but I don’t. It seems like an intimate word to be throwing around for any gender identity but especially the straight, cis man. To be beautiful is to be exposed to the world, like my wolfman legs when I wear a skirt. Beauty means you’re noticeable and perpetually noticed. Pictures will be taken of you. Strangers will gawk at you. Doors magically open for you, like in a Harry Potter movie. But beauty also requires maintenance and upkeep. It’s something to preserve, to cherish and to bitterly cling to. In short, it is the clichéd blessing and curse.

That might be why straight cis men are still so hesitant to embrace skirts, and why legacy mall brands like the Gap or J. Crew aren’t pumping these things out for mass consumption. A skirt can make a straight man beautiful. It can confer both glamour and power at the same time. It exposes you, literally and figuratively.

That feeling of exposure is one that was totally foreign to me, that required some real getting used to. It wasn’t imaginary subway-grate flashing scenarios that really gave me pause. It was the question of what people will think. Even in supposedly tolerant Los Angeles, gender- and sexuality-based hate crimes are a commonplace occurrence. The reality of prejudice, homophobia, transphobia and other malignant aspects of human society is broadcast and discussed in the media every day. The Wi Spa protests in Koreatown were just one recent instance of a certain segment of society clinging to abhorrent ideas about what they think gender is. Wearing a skirt is not like wearing drop-crotch pants or even wearing nail polish. It’s more exposure than most cis straight men are used to.

Whatever risk you might perceive — social anxiety, accidentally sitting your bare ass on a chair — are outweighed by the feeling of power that comes from wearing a skirt. My girlfriend sheepishly copped to thinking I look sexier and tougher at the same time. She even dared to say I looked “beautiful.” Maybe it was the thrill of seeing me in a different light, the pleats that make it resemble a kilt or just the lack of fabric separating us. I can’t say for certain, but there’s really nothing else in my closet that makes people notice me as consistently. At times, my anxiety gives way to confidence and pride. Paradoxically, the vulnerability makes me feel stronger.

The thing that keeps straight cis men who aren’t incredibly famous from wearing skirts is fear. But practicing fear is antithetical to seeing beauty; exposure moves us closer to feeling beauty’s texture on our skin. By giving in to beauty in my own life, I’m banishing fear from my brain.

Being beautiful is not something I was told to be, but beauty is also the thing that makes life worth living. It’s baked into the vibe of Los Angeles: beauty creeping out of the mass of strip malls and popcorn ceilings. Beauty is the thing we crave and what gives value to a place most of us can’t even afford to live in.

Dave Schilling is a writer, humorist and appreciator of fashion whose work has appeared in the New Yorker, the Guardian, New York Magazine and GQ. He is the host of the “Galaxy Brains” podcast.

Denial of responsibility! TechiLive.in is an automatic aggregator around the global media. All the content are available free on Internet. We have just arranged it in one platform for educational purpose only. In each content, the hyperlink to the primary source is specified. All trademarks belong to their rightful owners, all materials to their authors. If you are the owner of the content and do not want us to publish your materials on our website, please contact us by email – [email protected]. The content will be deleted within 24 hours.
beautyblessingsblockcisdontEmbracelifestyle newslifestyle update
0
Share

How to secure Microsoft 365 with app governance