Notice: amp_is_available was called incorrectly. `amp_is_available()` (or `amp_is_request()`, formerly `is_amp_endpoint()`) was called too early and so it will not work properly. WordPress is currently doing the `pre_get_posts` hook. Calling this function before the `wp` action means it will not have access to `WP_Query` and the queried object to determine if it is an AMP response, thus neither the `amp_skip_post()` filter nor the AMP enabled toggle will be considered. It appears the theme with slug `publisher` is responsible; please contact the author. Please see Debugging in WordPress for more information. (This message was added in version 2.0.0.) in /home/runcloud/webapps/techilive/wp-includes/functions.php on line 5313
 Down 2-0 to Mavericks, Clippers declare a comeback starts with stops - TechiLive.in 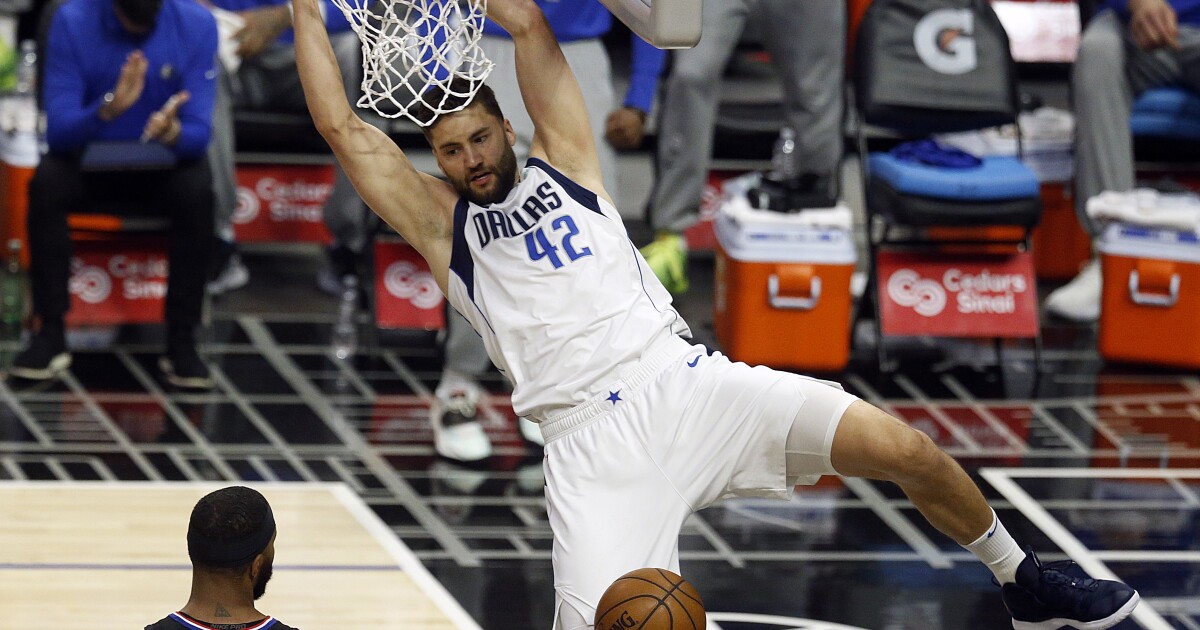 Down 2-0 to Mavericks, Clippers declare a comeback starts with stops

There was no misinterpreting Kawhi Leonard‘s message.

After Tuesday’s 127-121 loss to Dallas at Staples Center put the Clippers in a 2-0 hole in their best-of-seven first-round playoff series, nearly every answer uttered by Leonard was a variation on one theme.

“We got to get stops,” the Clippers star said, after his 41 points weren’t enough. “We have to get stops.”

Asked to describe his team’s state of mind with the series shifting to Texas for its third and fourth games, Leonard instead began, “Like I said, we got to play defense. We got to figure this out. Just come in and see what we’re doing wrong.”

The Clippers rarely lost consecutive games during the regular season. How can they apply that resilience now?

“There’s no magic, we just got to come out and play basketball, like I said, get stops,” Leonard said. “That’s the name of the game right now. They are shooting too great in the first two games. We have to help each other, we have to help each other too many straight line drives, dunks, layups. We got to hang our hat on the defensive end.”

Leonard’s diagnosis was crystal clear. And it was all the more notable because myriad miscommunications have put themselves in this position and contributed significantly to a Mavericks offense that has made half of its 70 three-pointers and 57.9% of its two-pointers.

The Brooklyn Nets finished as the most efficient regular-season offense in NBA history by posting an offensive rating of 117.1. The Clippers are scoring more than 121 points per 100 possessions in the postseason. But it hasn’t mattered because of Dallas’ scorching 128.3 offensive rating.

Led by Luka Doncic, the Mavericks have made contested shots, shooting 46% inside the arc and two for two outside it with a defender less than two feet away. More often, however, they’ve taken advantage of drives that pick-and-roll coverages were intended to close, or passing lanes that shouldn’t have been so open.

“I don’t think they made tough shots,” coach Tyronn Lue said. “I mean, Luka made some tough shots, but that’s what he does. But we had some game-plan mistakes again tonight and then we double-teamed Luka or you blitz Luka, it leaves other guys wide open.”

What is happening is a reflection of their limited opportunities to jell in the regular season and imprecise execution after being given precious time to prepare for Dallas. The timing of injuries and trades left the Clippers just one game to play the top eight of their playoff rotation together before the regular season ended.

Instead the roster was rested during the season finale against Oklahoma City, with Lue believing one game wasn’t likely to make-or-break on-court chemistry and the five days before the playoffs’ start would provide ample time on the court together. In that span, Lue consented to players requests for a 12-minute scrimmage leading up to Game 1, and as Game 1 loomed, center Ivica Zubac described the team’s focus as extremely detail-oriented.

Yet the Clippers have little to show for it.

After one coverage of a screen was flubbed in the first half, Zubac scrunched his eyebrows at guard Reggie Jackson, wondering what the guard was doing.

From inside the paint, Leonard raised his arm and pointed in alarm when a sideline trap of Doncic left Tim Hardaway Jr., one of the series’ hottest shooters, wide open. The gesture seemed to be an instruction for someone else to cover Hardaway, but no one ran to contest the shot until Leonard did … too late.

Paul George, Serge Ibaka and Rajon Rondo walked off the court midway through the second quarter yelling and frustrated after each clearly believed someone else was supposed to rotate to take away the open lane that saw Mavericks center Willie Cauley-Stein slam an easy alley-oop.

George slumped his shoulders midway through the third quarter when indecision between Nicolas Batum and Zubac on whether to switch on a pick-and-roll — combined with zero help on defense from the back — allowed Cauley-Stein an easy roll and open lane to the basket.

Clippers assistant Dan Craig, the defense’s architect, slapped his hands together after Dallas’ Josh Richardson had ample time to shoot an uncontested three-pointer in the fourth quarter.

Was Batum expecting Zubac to hedge the ball screen that sprang Richardson? Zubac was still standing in the paint when the shot went up.

Was Zubac expecting Batum to run over the top of the screen? Batum went underneath.

“… It’s a tough loss but I think everybody in the locker room has their head high, a little frustrated, figuring out how we want to be better just because we feel like we let go two games that we very much could win. It’s difficult, it’s very frustrating, but we’re going to get to the board and we’re going to figure out how we can be better.”

The back-breaker was Hardaway’s sixth three-pointer with one minute remaining and the Clippers trailing by four. To force Doncic to pass, George ran at the guard as a second defender but it backfired when he found an open Dorian Finney-Smith at the free-throw line, who whipped the pass beyond the arc to Hardaway, left wide open when George didn’t recover.

An assistant thumped the scorer’s table. There was no reason for Hardaway to be so open — he already had made 10 of his first 16 three-pointers to start the series.

“The mistakes we’re making, they’ve just been crucial,” George said. “I don’t think they have missed many on mistakes we’ve made to bail us out. So, again, give them credit. They shot almost 60[%] tonight. They’re making shots and if we don’t dial in, if we don’t honor the coverages, if we don’t do a better job defensively, they’re showing that we gonna pay for it.”

After 17 three-pointers in Game 1, Dallas made 18 in its Staples Center encore. It was only the third time this season the Clippers have allowed at least 15 three-pointers in consecutive games — but one of those instances came in March, in back-to-back games against Dallas.

“I’m not concerned,” Lue said. “They got to win four games, and you come in on the opposing team’s floor and you play. There’s no pressure, you can make shots, because you just try to come in and steal a game or steal two games. But now they got to go home and try to keep up the same shooting. It’s easy to come out on the road and do that when there’s no pressure on you, so we’ll see in Game 3.”

Maybe it was inevitable the Clippers wouldn’t know where their teammates would be on the court; the lineup on the floor for Hardaway’s last shot never played together in the regular season. One member of that closing lineup, second-year wing Terance Mann, finally was taken from the bench and played because Lue had few good options defensively and Mann also proved adept at getting to the rim.

“He did a good job, I give him credit, but that is not what we need to do,” Leonard said. “We need to get stops, like I have been saying.”

Denial of responsibility! TechiLive.in is an automatic aggregator around the global media. All the content are available free on Internet. We have just arranged it in one platform for educational purpose only. In each content, the hyperlink to the primary source is specified. All trademarks belong to their rightful owners, all materials to their authors. If you are the owner of the content and do not want us to publish your materials on our website, please contact us by email – admin@techilive.in. The content will be deleted within 24 hours.
Clipperscomebackdeclaremavericksnews updatesports newssports updatestarts
0
Share

3 Top Stocks Analysts Predict Will Rally By 20% Or More