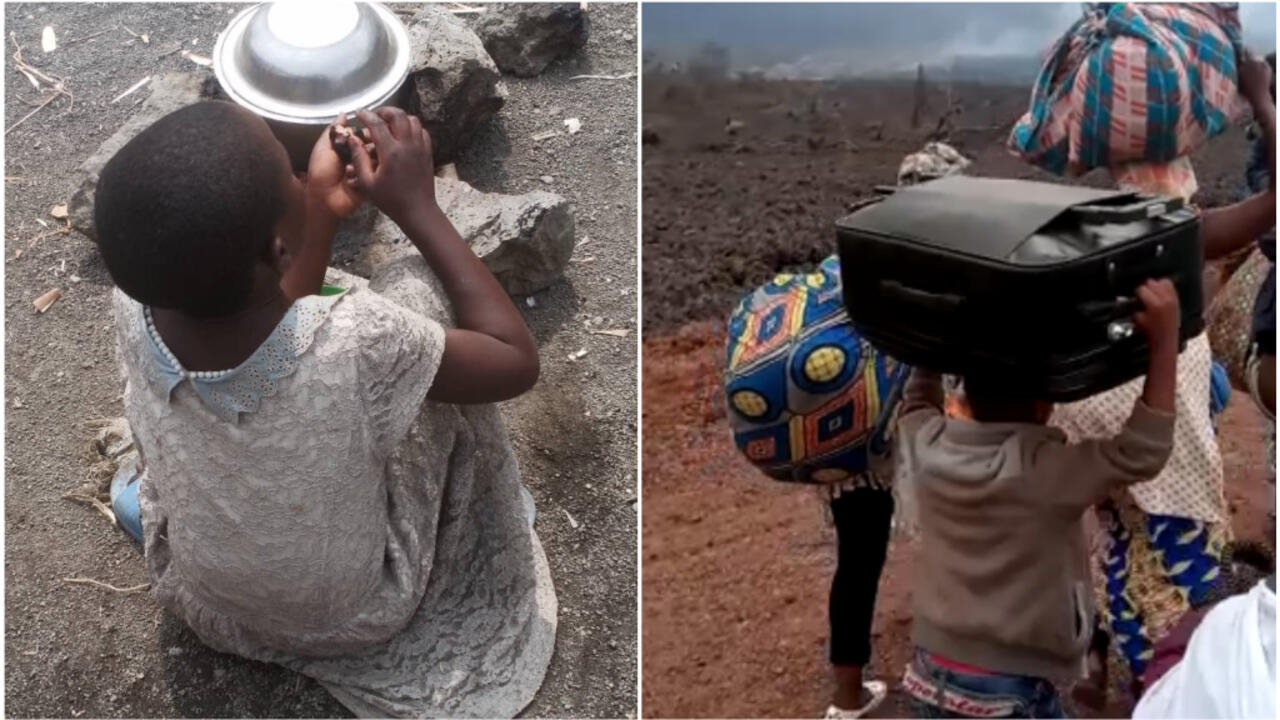 The eruption of Mount Nyiragongo in eastern Democratic Republic of the Congo on May 22 and the evacuation order for the city of Goma five days later have displaced thousands of people. Amidst frantic departures, some families were separated, leaving very young children to fend for themselves. A group of local organisations are working to care for these children and help them reunite with their families.

The unexpected eruption of Mount Nyiragongo during the night of May 22 sparked panic in the city of Goma, in DR Congo’s North Kivu province. Lava flows destroyed a number of homes in neighbourhoods surrounding Goma. Locals, who had no warning of the eruption, had to flee.

At least 32 people were killed as a direct result of the eruption, including three children, according to UNICEF. The organisation also identified more than a thousand children who were separated from their parents on the night of the eruption.

The number of separated children increased when, days later, officials ordered the evacuation of Goma, sparking a mass exodus. Nearly 400,000 people fled the city, heading in all directions. Some went to Saké, about 30 km to the northwest, while other people headed due north to the Rutshuru territory. Then there were those who fled to Minova, in the neighbouring province of South Kivu, while others moved east in an attempt to cross the border into Rwanda. Many fled on foot, carrying suitcases, bundles and, in some cases, even mattresses, as they walked for hours, covering long distances.

‘Residents were given advice: for example, write their phone number on a piece of paper and slip it into their children’s pockets’

Our Observer, Jack Sinzahera, a member of the pro-democracy collective AMKA CONGO, went to the displaced persons camp in Rutshuru on Sunday, May 30. There, he met with families who were missing children as well as separated children, who were all alone:

During the evacuation on May 27, residents were given advice: for example, write their phone number on a piece of paper and slip it into their children’s pockets. Even so, quite a few children were separated from their parents on the way. Due to congestion and crowds, some children lost sight of their parents and went the wrong way. We launched a WhatsApp group called “SOS Enfant Perdu Goma” [Editor’s note: “SOS Lost Child Goma”], to help separated families.

‘There are also children who said they fled all alone’

Rutshuru, Democratic Republic of the Congo

In light of this emergency situation, the Territorial Youth Council of Rutshuru has been sheltering about 20 children who were separated from their families. Our team spoke to Roger Sebyera, a member of this group:

It’s about 70 km from Goma to Rutshuru. People fleeing were extremely stressed and with the crowd, if you lost sight of a family member for two or three minutes, you could easily lose them. There are also children who said they fled all alone. In our offices, we are currently housing a number of unaccompanied children who have nowhere else to go. Right now [Monday, May 31], there are about 20 children between one and seven years old. At night, we walk around Rutshuru. Sometimes we find lone children sleeping under the trees next to the road.

Two sites for displaced persons were set up in Rutshuru. We go there every morning to see if there are any families missing children. If there are, we write down their names and then check back at our offices.

Since Saturday, ten families have been reunited with their children. We are working on getting in touch with the people running displaced persons camps in Saké and elsewhere, to try and find other parents of missing children. But not all of the victims of this disaster are in displaced persons camps, some are staying with host families. The Red Cross is also helping us to connect these children with their families. In the meantime, the community is working together to feed these children and care for them.

While some children were separated from their families during the evacuation on May 27, others lost  their parents in the chaos after the initial eruption on May 22. On May 25, Goma photographer Key Castofas took portraits of dozens of parents holding up signs with their names andc ell phone numbers. Since then, these images have been circulating on Facebook, Twitter and in WhatsApp groups:

I’m volunteering with a campaign launched by LUCHA [Editor’s note: This citizen movement, whose name roughly translates to Fight for Change, promotes social justice through non-violent means]. When the eruption happened, some children from neighbourhoods near [the volcano] were playing outside. They ran home, only to find their homes empty. In some of these cases, the parents were also far from home, working or carrying out other activities, so the children fled by themselves.

Thanks to this initiative, we were able to identify 150 parents whose children went missing after the eruption. At my foundation, we have cared for 30 children in all. So far, ten of them have found their respective families. I have six children staying at my home and others are staying with foster families in Saké. Every day, I go to Saké to see if there are families there who are still looking for their children.

Several NGOs are working on registering displaced persons but the exact number of missing children is still unknown. Our team spoke to Marcel Muamba Kalala, president of the North Kivu branch of the Red Cross. He told us his organisation has received 1,328 requests from parents still looking for their children.

“Since the start of the crisis, we’ve identified 177 unaccompanied children,” he said, explaining that 94 of those children have since been reunited with their families while a further 83 were sent to local centres run by social services. Marcel Muamba Kalala says he encourages any local groups caring for unaccompanied children to get in touch with the Red Cross.

Organisations in North and South Kivu are also concerned about the conditions in which victims of the disaster are living. Many lack food, water and other basic necessities. Doctors Without Borders is also worried about an outbreak of cholera in the camps for displaced persons.

Denial of responsibility! TechiLive.in is an automatic aggregator around the global media. All the content are available free on Internet. We have just arranged it in one platform for educational purpose only. In each content, the hyperlink to the primary source is specified. All trademarks belong to their rightful owners, all materials to their authors. If you are the owner of the content and do not want us to publish your materials on our website, please contact us by email – admin@techilive.in. The content will be deleted within 24 hours.
AfricaChildrenchildren's rightsCongoDemocratic Republic of Congodevastatingeruptionfamilies
0
Share