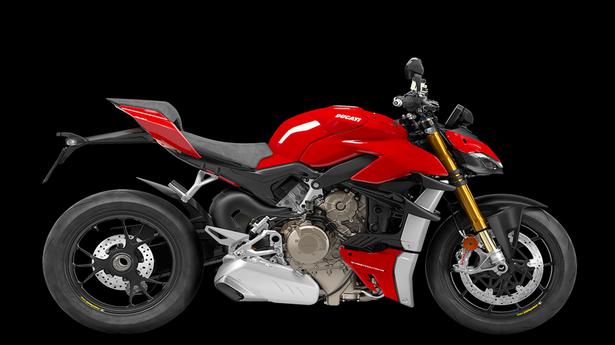 Ducati India has launched the new V4 SP in India at ₹ 34.99 lakh (ex-showroom) — the SP moniker stands for ‘Sport Production”. This, in Ducati speak, is used to denote a “production bike with specific technical equipment” that makes it faster on the track.

Visually, the bodywork is identical to the Streetfighter V4 save for the carbon-fibre mudguard on the V4 SP. Painted in the special Ducati Corse Winter test colours, the bike looks quite striking. The matt carbon bi-plane wings also get a special aesthetic touch in the form of the Italian flag. Each Streetfighter V4 SP will be progressively numbered, adding to the uniqueness of the bike.

The V4 SP uses the same chassis as the V4 S, including the Ohlins Smart EC 2.0 electronic suspension. The only difference is that the SP uses the Panigale V4’s springs with the fork spring preload down from 11mm to 6mm. The SP also benefits from new Brembo Stylema R monobloc brake calipers. These are said to offer better stopping power over the course of a number of laps during a track day.

Coming to the engine, the V4 SP is powered by the same 1,103cc, Desmosedici Stradale V4 engine as in the V4 S. It makes 208hp at 13,000rpm and 123Nm of torque at 9,500rpm. It has a nine-disc STM EVO-SBK dry clutch that is said to offer more effective anti-hopping during aggressive downshifts.

At ₹ 34.99 lakh, the bike is priced at a premium. For reference, the Ducati Panigale V4 SP was priced at ₹ 36.07 lakh when it was launched in November last year. Bookings for the new Ducati Streetfighter V4 SP are open across all dealerships in India.

Denial of responsibility! TechiLive.in is an automatic aggregator around the global media. All the content are available free on Internet. We have just arranged it in one platform for educational purpose only. In each content, the hyperlink to the primary source is specified. All trademarks belong to their rightful owners, all materials to their authors. If you are the owner of the content and do not want us to publish your materials on our website, please contact us by email – [email protected]. The content will be deleted within 24 hours.
Ducatilaunchedlifestyle newslifestyle updatenews updateStreetfightertechi live
Share