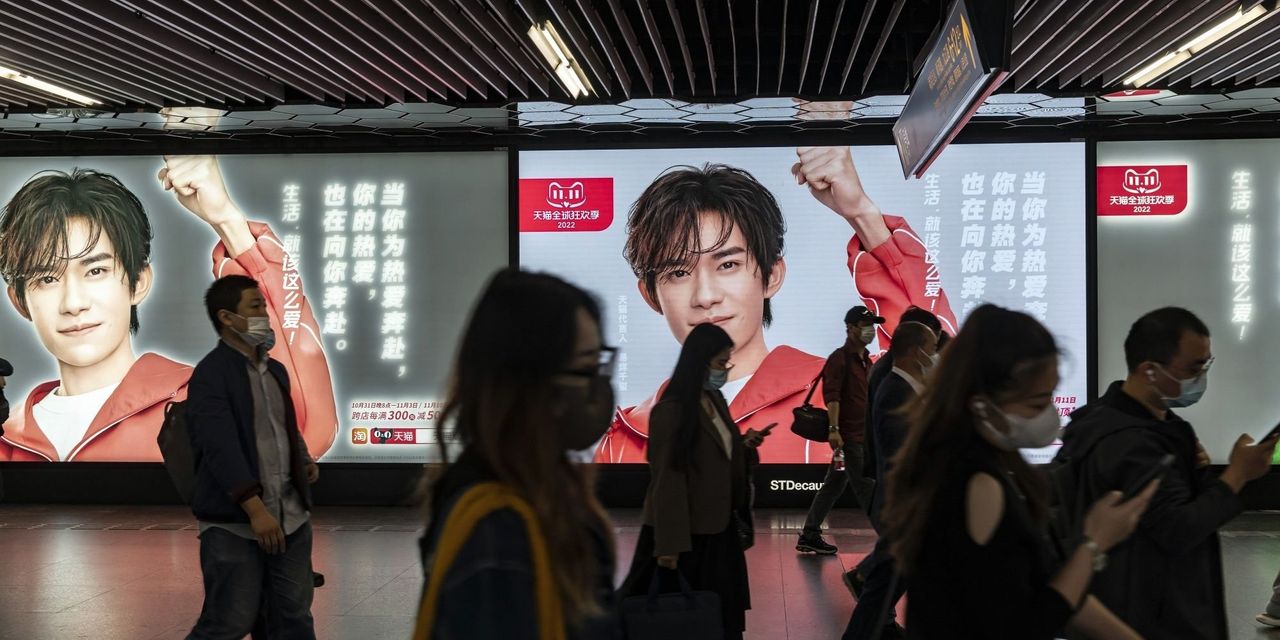 Alibaba on Friday didn’t disclose exact sales figures for the first time since it started its signature event, known as Singles Day, saying the results were in line with last year’s turnout. Alibaba reaped $84.5 billion in the total value of merchandise sold across its platforms last year, up 8.5% from 2020, the slowest increase since the company started the festival.

For more than a decade, Alibaba touted record-breaking sales numbers each year after the annual shopping festival. In addition to its comments regarding results being in line with last year, the Hangzhou, China-based company on Friday disclosed upbeat data showing sales expansion from international brands and agricultural products. Its rival

also didn’t reveal total sales numbers, saying that sales set a new high and that growth was faster than the industry average.

According to the market-data provider Syntun, online sales in China on Thursday and Friday totaled $43.3 billion across major retailers, based on transactions on dozens of platforms. Syntun attributed 61% of the total sales to Alibaba’s flagship platform, Tmall, and 27% to

This year’s Singles Day kicked off as China was dealing with economic pain that has crushed consumer confidence and dimmed employment prospects. A key factor has been Beijing’s zero-tolerance approach to smothering Covid-19 outbreaks, which has locked down cities and disrupted business activity.

China eased some pandemic controls Friday in a bid to “optimize and adjust” the current measures. The Wall Street Journal recently reported that Chinese leaders have yet to set a timeline for a broader reopening.

The economic headwinds have prompted many Chinese consumers to adjust the way they live, jettisoning a focus on luxury goods and concentrating on essentials.

Charlotte Kong, a 30-year-old Shanghai resident who in previous Singles Day promotion periods stocked up on skincare products, said she planned to skip the extravaganza this year. Ms. Kong was laid off in September, and her new job doesn’t seem stable enough. Uncertain job prospects have made her more financially disciplined. “I’m not spending money on frivolous things this year,” Ms. Kong said.

Everything is now a tech thing. Columnist Joanna Stern is your guide, giving analysis and answering your questions about our always-connected world.

A survey by the polling service of Southern Metropolis Daily, a large newspaper based in the city of Guangzhou, found that 24% of respondents didn’t plan to take advantage of this year’s Singles Day discounts, compared with 12% last year and 6% in 2020. One-third of those passing on Singles Day this year cited income reductions.

Singles Day has evolved from a one-day shopping bonanza into a weekslong affair that rakes in more revenue than the combined U.S. counterparts of Black Friday and Cyber Monday, according to data from Adobe Analytics. As the event has evolved, it has dropped the festivities and celebrities at the glitzy marathon stage shows that Alibaba used to host each year on Nov. 11, as well as the push to stockpile goods offered with steep discounts at the stroke of midnight.

Alibaba said it has one billion annual active users. Its Singles Day focus has shifted from bringing new shoppers for brands to cultivating loyal customers, the company said. Across the board, e-commerce platforms have offered discounts throughout the year and extended Singles Day discount windows to lure shoppers into buying. Alibaba rolled out presales on Oct. 24, four days after JD.com and

launched their respective campaigns. In the U.S., the holiday shopping season is starting earlier.

Alibaba faces intense competition from JD.com and Pinduoduo. Short-video platforms such as ByteDance Ltd.’s Douyin and Kuaishou Technology, which have made forays into e-commerce and touted their own shopping festivals, also pose challenges to Alibaba’s dominance.

What is your outlook on Alibaba? Join the conversation below.

Joseph Cooke, president of WPIC, a consulting firm representing more than 80 global brands on Alibaba’s Tmall, said this year was the first one in which most clients extended their Singles Day marketing campaigns onto other platforms.

The fragmented e-commerce landscape has diverted shoppers’ attention. In a survey by Bain & Co., 69% of respondents said they would make purchases on more than one platform during the Singles Day discount period, up 13 percentage points from last year.

To fend off competition, Alibaba recruited influencers previously active on rival platforms to conduct live streams on its own platforms, including Tmall and Taobao. The recent return of Li Jiaqi, a top influencer on Alibaba’s platforms, with 170 million followers, to his live-stream channel after disappearing from public view in June, generated excitement among consumers.

Denial of responsibility! TechiLive.in is an automatic aggregator around the global media. All the content are available free on Internet. We have just arranged it in one platform for educational purpose only. In each content, the hyperlink to the primary source is specified. All trademarks belong to their rightful owners, all materials to their authors. If you are the owner of the content and do not want us to publish your materials on our website, please contact us by email – [email protected]. The content will be deleted within 24 hours.
9988.HKAlibabaAlibaba Group HoldingartsArts/EntertainmentBABAbusiness newsBusiness update
Share

Well-respected analyst is ‘positive’ Apple is launching a…

ChatGPT login: How to login into ChatGPT: Step-by-step guide…

Deepti Sharma shines as India tune up for tri-series final…